“He’ll fall in love with anything in a petticoat. I’ve seen his type before. Got the sense of a half-witted sheep when it comes to women.”

This is what Richard Sharpe’s friend, Pat Harper, says about him in SHARPE’S RIFLES, which I recently re-read in my quest to read all the Sharpe series in order. I’ve also just read SHARPE’S HAVOC so according to Bernard Cornwell’s website, the next will be SHARPE’S EAGLE.

Sharpe certainly lacks judgement where women are concerned, but I suppose he can’t help it, since there is always at least one intriguing beauty in each episode. The women in the series are a bit like Bond girls, though. One can’t invest too heavily in their relationships with Sharpe because they inevitably get killed off, betray him or marry someone else to make room for the next one. But some of the film heroines have left an impression on me, among them Teresa, the Spanish guerillera who’s a match for Sharpe’s bravery and toughness; the wily Marquesa from SHARPE’S HONOR; and of course Lucille, with whom he briefly finds happiness.

I was sorry to see Lucille killed off so that the series could continue as Sharpe returns to India. In my earlier post on Sharpe in India I mentioned that I had mixed feelings on the success of translating elements from the book SHARPE’S TIGER (which occurs when Sharpe is a young soldier in India) to SHARPE’S CHALLENGE which is set post-Waterloo. I still found it worth watching. 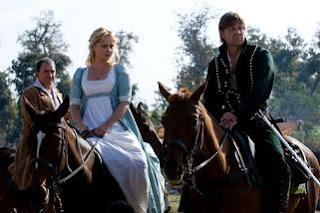 I’ve just discovered there’s a new Sharpe adventure, Sharpe’s Peril, also set in India, with a new “Sharpe Girls” played by Beatrice Rosen and Nandana Sen. You can learn more about the new episodes at ITV. Part 1 already aired and Part 2 airs on Sunday. Unfortunately you can only watch the videos online if you are in the UK. Boo!

I couldn’t even run the trailer at ITV though I was able to watch one at www.sharpefilm.com. I can’t tell if BBC America plans to run it, so I may have to wait until it hits Netflix. I find it hard to judge a film from its trailer; of course I will have to see it anyway, sooner or later. I can’t miss the chance for a Sharpe fix!

Which of the women in the Sharpe books or films do you find most interesting? Any who could be inspiration for a proper romance heroine?

Do you think this new installment in Sharpe’s adventures looks promising?

Sharpe’s Peril is sadly disappointing but you can watch them out of the UK if you download hotspot shield.

Teresa was the best for me. I hated it when that lunatic shot her. She was Richard’s equal in every way.
Kay

LOL, Elena–they ARE a lot like Bond girls, aren’t they? I also didn’t much like “Peril,” but I will always watch a new Sharpe movie…

I think the Marquesa was Sharpe’s match. I think women were Sharpe’s weakness. He really did fall in love with whichever woman happened to be in the book.

I was never a great fan of the series, although I like it well enough. It just is Sharpe-lite. The books show the “real” Sharpe!

Thanks for the tip, Erastes!

I liked Teresa best, of his women. She was tough…

But I think Sharpe really shouldn’t have had an affair with the Borg Queen. I mean, Napoleon is bad enough, but the Borg are just relentless…

Thanks, Erastes. It feels like the series is running out of steam though I will still try to catch this episode. I may wait, though–very busy with mess-in-progress.

LOL on the Borg Queen, Cara. I was wondering about that when I watched it! So is it the same actress? I meant to check and never did.

I haven’t watched that new Sharpe, the one with Padma Lakshmi, because a friend said that Sharpe and Harper was like watching MermaidMan and Barnacle Boy from Spongebob Squarepants.

And I’ve always thought the Bond girl thing, too! Sharpe can never settle down, it doesn’t suit his character. He does fall in love way too easily, which makes us fall in love with him more, too, I think.

I love both the series and the books, even though they are definitely different from each other.

LOL on the Borg Queen, Cara. I was wondering about that when I watched it! So is it the same actress?

Yep. The Marquesa is Alice Krige, who was the Borg queen in Star Trek: Final Conflict.

And she played Mary Shelley in Haunted Summer, and Lady Russell in the most recent Persuasion!

Wait, an entire post about the Sharpe books & shows, and Sean Bean’s name never somes up? How can it be?? Sean, Sean, Sean. There, now it’s fixed. 🙂

Aw, Greta, you know I only watch the films for research purposes, suffering for the craft, as it were. 🙂