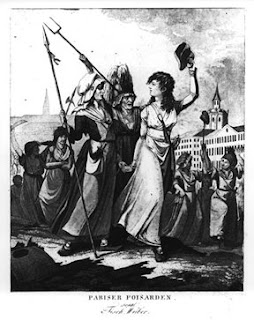 Bliss was it in that dawn to be alive
But to be young was very heaven!
Wordsworth

We had an election here two days ago and I’m a registered Democrat who voted for Obama/Biden.

I’m thrilled and proud and can’t think of it without tearing up. I voted early in the morning, with a wait in line of over an hour, a great convivial atmosphere, and donuts and coffee sold by our enterprising local Girl Scout troops. Then I parked myself in front of the tv that evening to watch the returns, expecting a long, long night. And there’s this wonderful, breathless, exciting feel that history has been made, and we’re witness to it. Will the election of 2008 be considered by future historians as the great turning point in American history?

Yes, but what has this to do with the Regency? 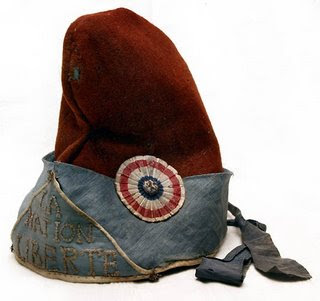 he great turning point for the Regency was the French revolution. Just as we feel now, that history has been made and a new era is beginning, people then might remember where they were when they heard about the fall of the Bastille. The French revolution was the wakeup call of its day, a source of inspiration and hope.

It’s hard to reconcile this with the later terror and despotism, but you have to remember that the revolution was not, in its early days, about beheading aristos. The three colors of the tricoleur included white for the Royal Family of France and red and blue for the city of Paris. It was to be a new age of reason and of liberty, fraternity, and equality.

The year 1788 may be assumed as the epoch of one of the most important crises produced by this feeling. The sympathies connected with that event extended to every bosom. The most generous and amiable natures were those which participated the most extensively in these sympathies.
Shelley

You have to remember that at this time, about one in ten men in England could vote, and the right to vote was based on property ownership. It’s no wonder that the possibilities raised by the the ideals of liberty, fraternity, and equality resonated over the Channel and around the world.

Voting reform was one of the hot issues of the first few decades of the nineteenth century, and the government clamped down severely upon radicalism or attempts to form unions. It wasn’t until 1832 that the Reform Bill expanded voting rights (some) and cleaned up some of the worst abuses of the system. This uninhabited hill, Old Sarum, abandoned in the thirteenth century when the city of Salisbury was built, was a “rotten borough,” represented in Parliament, when the huge new industrial cities like Manchester or Liverpool were hardly represented at all. For more about the Reform Bill, see this entry in Wikipedia.

How do you feel about the election? What was your voting experience like?

My voting experience was a breeze, there as one older lady in front of me, and it took all of about ten minutes to get it done.

I felt great right after, and nervous the rest of the night, and nursed a hangover the next day.

I’m registered as a “permanent absentee” voter in King Co. (where Seattle is located), so I got my ballot in the mail in mid-October, filled it out that night, and dropped it in the mail the next day. Easy as can be.

Tuesday I was a nervous wreck, especially as the early returns came in. I stayed at work until they called PA and NH, then for the first time wished I had an iPhone, because not having any access to news for the 45 minutes it took me to wait for the bus and then ride to the park & ride drove me crazy. Not long after I got home, the networks called OH and NM…and I went out to buy our champagne. (My husband wouldn’t allow me to buy it any sooner for fear of jinxing the election!)

We tried to order pizza, but everyone else had the same idea and the waits were 90 minutes or more, so we ate Chinese takeout while watching Stewart and Colbert. We were planning to switch to CNN or MSNBC right at 8:00 Pacific for the final call, but were still on Comedy Central when Stewart called the election, which just felt right, somehow.

It was quite a night. I love the images of all the impromptu street parties and parades that broke out in cities and college towns around the country. OTOH, my husband and I are both from politically mixed families and have brothers who are completely devastated by the outcome. It’ll be interesting to see how it all settles out in the coming months and years.

I am not American, but it was not only we northern neighbors who seemed fully as interested in the outcome as Americans themselves. It was quite amazing to see coverage of how people in country after country were following ever second of the polls, to the point of cancelling important events so as to allow everyone to follow.

With no disrespect to any of the other candidates; I think the world believed the President-elect’s promise of a change.

Working at home means I had the luxury of voting at a quiet time–no lines, the same sense of exhilaration Megan mentioned.

My kids came home and told me they had “voted” at school and Obama come out slightly ahead (even though we live in a conservative area). I’ve heard kid votes are often a good predictor and I’m glad they were this time.

That evening we all stayed up later than usual. We were all beat the next day, but it was worth it.

I waited about an hour to vote, in the morning before I went to work, then waited as a nervous wreck all day. 🙂 But that night I went to the Democratic party watch party, which was jam-packed with people. It was amazingly wonderful, with loud music, lots of giant TV screens, signs waving, and massive jubilation when the words “Barack Obama Elected President” flashing on those screens. Then I cried and hugged strangers. 🙂

Now I still have a sore throat, but it was all worth it. Let’s just hope it doesn’t devolve like the French Revolution, LOL

I took the day off and my husband worked from home so we could go to the polls when they would not be so crowded. We arrived at 10:20 and were done by 10:40 AM (he was done a bit faster, as the S-W line to get one’s ballot was shorter than my I-M line). Our local Starbucks offered a free cup of coffee and a local hair salon offered a free wash and blow dry, so I did my civic duty and was rewarded. The biggest reward, of course, was that my candidate won. In DC there was never any doubt who would get our 3 electoral votes, although the margin of victory – 93% – was higher than anyone had predicted.

My youngest was elated and called from Madison, WI; he later sent us photos of the crowds lining the streets between the university and the State House. My middle son sent a happy e-mail from Vietnam, where the response was rather more subdued, and we called our oldest to share our happiness. I’m a pessimist by nature, but even I was overcome by joy and hope.

Susan, I got my free Starbucks, too. And I would have gotten that wash and blow-dry had I known.

My husband and I rose at 4:30am, got to our polling place at 5:30am and were about 50th in line. Our polls opened at 6 and we were out at 6:30am (we went early only because we were afraid of long lines later). My daughter went at noon and was out in 10 minutes.

My daughter and her boyfriend celebrated in the streets of DC. A friend of my son’s was in a bar near Grant Park in Chicago.

One of the good things about living in a rural area is that more often than not if you get there early you can vote and get out in a hurry. I was off work on Tuesday, so I hopped in the car, drove the 8 miles to the polling place and was back at home by 7:30 AM.

I get a lump in my throat every time I vote. I have voted in every election since I turned 18. (which was more years ago than I care to remember!) I just think about those people in Iraq and other countries where voting is a death defying act. They walk for miles and miles to the polling place and risk being killed by terrorists all to exercise a right that many of us take for granted. It is a big deal to me. Every single time. This was a monumental election for so many reasons, but for me the most important thing that happened was the message sent to children all over America and all over the world – You can be whatever you have the courage and tenacity to be. Don’t let anything stand in your way!

I am just so sorry that President Elect Obama’s parents and grandparents are not alive to share this with him. Perhaps his grandmother decided it was time to go – her job was done. His is just beginning.

I am proud to know all of you ladies who voted.

We had no problems voting — we went right at 6 when it opened, and while there were more people there than in years past, in comparison to where there were lines and all, very quiet. Have no idea what it was like during the day though. But even here in NJ they said there were plenty of lines around the state.

I definitely was nervous about the outcome, glued to one news station on the tv and a quite lovely automatic refreshable electoral map on the laptop, just couldn’t miss anything. Didn’t get to sleep until 1. But quite happy with the results. But I was more amazed on the crowds and celebrations here and around the world. But if there is anything else to come out of this election besides the history, sure hope people keep coming out in years to come. It doesn’t have to be “the most important election in our lifetimes” to do our duty. 🙂

I’m late commenting here because tonight’s the opening night of the play I’m in — and we’ve had long rehearsals every night…including election night! So I didn’t exactly get to watch the returns…

Though several of the actors had laptops with wifi in the green room (and as it’s Caltech, there’s lots of wifi), so I did get updates in between running lines and missing cues…