Elk: The Theory by A. Elk brackets Miss brackets. My theory is along the following lines.

Elk: All brontosauruses are thin at one end, much MUCH thicker in the middle, and then thin again at the far end. That is the theory that I have and which is mine, and what it is too. 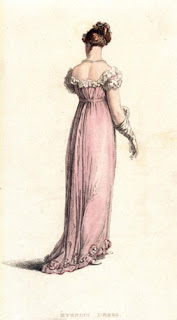 So my theory is…

It wasn’t bare arms, bosoms, or ankles, it was the bared nape of the neck that defines Regency gowns.

(Although with the lady at the right, you get the best of all worlds.)

Have you ever noticed how so many fashion prints show women with their necks crooked or bent, even if they’re covered by the brim of a hat or a ruff? Men, for the most part, were paying for ladies’ gowns, and while they might appreciate the bared skin, they might not want wives, daughters, mistresses to assume that just because they were dressed as a goddess, that they might assume immortals’ free behavior. 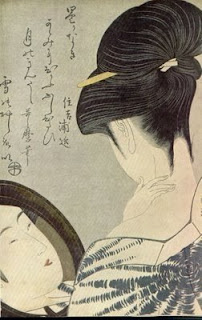 Women might not have to appear in public any more with heads and shoulders decently covered, but submissiveness was expected (unless they were extremely well-born and/or mad, bad, and dangerous to know).

I have to admit I’ve been thinking about this quite a lot as I’ve been reading Pam Rosenthal‘s wonderful The Edge of Impropriety, in which clothes, and the massive changes in fashion of the first two decades of the nineteenth century, play a supporting role. Pam will be here as our Riskies guest this Sunday, November 16, to talk about the book and give away a signed copy.

And today I’m over at the Hoydens, talking about dumb luck in a box. Come and visit!

Excellent theory, Janet — I think you’re quite right. And isn’t it interesting that gentlemen’s necks were so swathed with muslin.

Oh, and thanks for the mention of EDGE. 😉

I do think it is sexy for men to kiss the nape of a woman’s neck. Or to touch it…

It feels like a vulnerable place to me. Maybe that is why it is alluring.

Very interesting theory about the nape of the neck. I never really thought of it before. But now that I am I wonder what the allure of chokers and I mean the really simple black velvet ones with a choker of pendant hanging from the front and dangling ribbons from the back.

Necks are so intrinsically sexy, Janet, because of the pulse beating there. And necks are fragile, too, so that makes them more precious. I like your theory.

On a related note, I found out a while ago that during the Regency “neck” could be used as a euphemism for bosom.