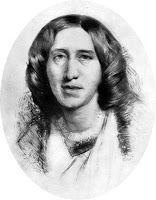 At this time of year, when we’re supposed to think about all we’re “thankful” for (like LOLRegencies and chocolate-cranberry truffles? Sequined party dresses and champagne? I’m definitely thankful for those…) I’m thankful for old favorite books to read, and the people who wrote them. And today is the 189th birthday of George Eliot, great writer and rebellious spirit!

Mary Anne Evans was born the youngest of 5 children in 1819. Her father was the manager of the Arbury Hall estate belonging to the Newdigate family in Warwickshire, and she was born on that estate at a house called South Farm. Early on she showed signs of obvious intelligence, and was allowed access to the library at Arbury, where she was especially interested in the volumes on classical Greece. Eventually she was sent to boarding schools at Attleborough, Nuneaton, and Coventry, where she met the evangelical Maria Lewis, who became her great friend and correspondent (until Mary Anne decided to quit going to church…)

In 1836 her mother died and she returned home to keep house for her father, until her elder brother married and took over the house and she and her father moved to Coventry. The move brought her closer to new influences, including the wealthy Charles and Cara Bray, whose home at Rosehill was a haven for people of radical views and liberal theologies. It was there she made the decision to stop attending church, which caused a deep rift between herself and her family (her father threatened to kick her out, but didn’t follow through). When her father died in 1849, she traveled to Switzerland with the Brays and then stayed on in Geneva alone. On her return to England the next year, she moved to London alone with the intent of becoming a writer. (Oh no! A woman on her own, running loose in Victorian England!!!) 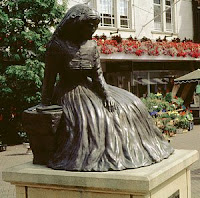 In 1851 she met philosopher and critic George Henry Lewes, and by 1854 they were openly living together. Lewes was married, but he and his wife, Agnes Jervis, had agreed on an “open marriage”–in addition to the 3 children the Lewes’ had together, she also had several with other men. (Oh no! Shockers!!!) In 1854, Evans and Lewes went together to Berlin as a sort of “honeymoon”, where she called him her husband and started working on a series of essays that would eventually become Scenes of Clerical Life. She also came up with a new nom-de-plume–George Eliot.

In 1859, her first published novel, Adam Bede, made a big splash, and speculation as to the author’s identity ran rampant (there was even a “pretender” to the name, Joseph Liggins). In the end, she had to step forward and admit she was the author. The revelations of her private life shocked many of her readers, but it didn’t seem to affect sales. In 1867, the couple was even introduced to Princess Louise, daughter of Queen Victoria and a big fan.

Eliot continued to write well-received and popular novels for 15 years. After Adam Bede came The Mill on the Floss, dedicated “To my beloved husband, George Henry Lewes, I give this MS of my third books, written in the third year of our lives together.”

Her last novel was Daniel Deronda, published in 1876, after which she and Lewes moved to Witley, Surrey, in hopes that the fresh air would help improve his failing health. He died in November 1878, and Eliot spent the next two years editing his final work, Life and Mind. But the scandal didn’t end with Lewes death. In May 1880, Eliot married an American banker named John Walter Cross, 20 years her junior. 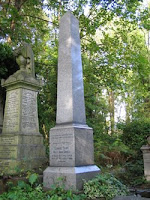 Cross was not the most stable of characters. On their honeymoon in Venice, he either jumped or fell from their hotel window into the Grand Canal (yuck!), and there were quarrels. That didn’t last long, as Eliot died soon after their return to their new house in Chelsea, on December 22, 1880, at the age of 61. The possibility of burial at Westminster Abbey was vetoed due to her naughty life (refusing to go to church, shacking up with Lewes, etc), and she was buried next to Lewes in Highgate Cemetery. In 1980, 100 years after her death, a memorial plaque was erected at Westminster’s Poet’s Corner.

Some of her other works include Silas Marner and Romola, set in 15th century Florence, but my personal favorite of her books (and one of my favorites of all time) is Middlemarch, her 7th and next-to-last work, published first in serial form between 1871-72. It’s a big book, with multiple plots, a huge cast of characters, and many underlying themes such as the status of women in society, the nature of marriage, religion/hypocrisy, political and educational reform, and idealism vs self-interest (themes that never lose their immediacy, especially if one looks at this year’s election!). It’s also a great story. Virginia Woolf called it “the magnificent book, with all its imperfections, is one of the few English novels written for grown-up people.” 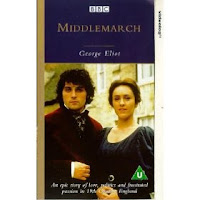 Middlemarch was a Masterpiece Theater series in 1994, starring Juliet Aubrey and Rufus Sewell, and I have seen rumors of an upcoming feature film, written by Andrew Davies and directed by Sam Mendes, though I haven’t seen any casting news. Maybe Mendes’ wife, Kate Winslet? It’s hard to picture her falling for Casaubon’s BS, though.

A few sources I like (and used for this post) are: Jenny Uglow, George Eliot. Kathryn Hughes, George Eliot: The Last Victorian. Sandra Gilbert and Susan Gubar, The Madwoman in the Attic: The Woman Writer and the 19th Century Literary Imagination. Jerome Beaty, Middlemarch from Notebook to Novel: A Study of George Eliot’s Creative Method.

Do you enjoy George Eliot? What are your favorites of her books/the film adaptations of them? (There was good one not too long ago of Daniel Deronda). What books are you especially grateful for this holiday season??? (I think I’m going to curl up with Middlemarch this evening…)

Amanda, you are reminding me that George Eliot’s works and their adaptations are still on my To Be Read and To Be Viewed lists. I am so ashamed (and making early New Year’s resolutions).

Elena, both the Middlemarch and Daniel Deronda adaptations are very good! (they’re also the only ones I’ve seen–I’ve actually never been too fond of Silas Marner, and I’m not sure if there’s a Mill on the Floss adaptation–anyone know?)

There is an adaptation of The Mill on the Floss
http://www.imdb.com/title/tt0119673/

I know I read Silas Marner in high school or college and I remember nothing about it. I checked a synopsis of it online and no bells were rung. I wonder if I read Middlemarch, too. I did take lots of English Literature in college.

Like you, Elena, I’m thinking I ought to re-read some of these literary works. More for the to-be-read pile!

I haven’t seen Middlemarch, but I loved Daniel Deronda. Hugh Dancy was great in that. I also The Mill on the Floss, but it was a while ago and all I remember is that Emily Watson was in it.

I loved the PBS Middlemarch but my favorite of Eliot’s books is Daniel Deronda because it doesn’t quite work; but what a brilliant and brave attempt it is. I don’t think there’s any novel quite like it in its scope and daring.

I’d like Mill on the Floss better if it started pretty much where it ends, but with Maggie surviving (sorry, spoiler!). There was a PBS Silas Marner with Anthony Hopkins, I think–very well done. It’s not an easy book.

Isn’t it interesting, tho, how few romance writers attribute G. Eliot with any influence at all…

Amanda, I loved Middlemarch. Loved it. I haven’t read a lot of other Eliots, but I know I should, especially now I’m older. Thanks for reminding us all that there are great women authors of past generations (as well as us!)

“I also The Mill on the Floss, but it was a while ago and all I remember is that Emily Watson was in it.”

How did I miss this?? Must go look for it.

“Isn’t it interesting, tho, how few romance writers attribute G. Eliot with any influence at all.”

Janet, I think this would make an interesting post all on its own! Maybe it’s because her books only feature romance as a sort of peripheral thing, a part of the other themes that are front and center (though I think Dorothea choosing Ladislaw in the end is quite romantic, as is Daniel Deronda). I would love to see more romances that place the characters in the midst of their world in such a way.

Next week is also Louisa May Alcott’s birthday (speaking of past women writers!) Glad to see another Middlemarch fan here, Megan. 🙂

The Mill on the Floss and Silas Marner were my inroduction to George Eliot. I adored as a young teen and still adore Silas Marner. I have read Midlemarch, but not Daniel Deronda.

I have yet to watch any one of them. Jane mentioned Hugh Dancy and Janet mentioned Anthony Hopkins. So DD or SM to watch. Hmm…

I read The Mill on the Floss in college and remember absolutely nothing about it. What a shame! And it takes me so long to get through a book, too …

Rufus Sewell in Middlemarch? I’m a fan, so I’ll have to check that out. I also love Emily Watson, and it will be easier to fit a netflix viewing of Mill into my days than a reread of that big fat novel …

Thanks, Amanda, for bringing George Eliot back to mind.

I’ve never read any George Eliot–sorry! 🙂 I wasn’t an English major, so my reading of the classics has not been very systematic.

I noticed one of your sources was by Jenny Uglow. One of my favorite history books is The Lunar Men, by her. It’s wonderful!

There are certain books I have reread many times–The Lord of the Rings, Watership Down, and The Little Prince, to name three. (That last one has the added benefit of being very short! 🙂 But my TBR list grows ever longer.

I haven’t read any of George Elliot’s books either, but then I didn’t study in an English speaking country 😀

I’ve only read Mill on the Floss and Silas Marner, but I’ve seen the Juliet Aubry/Rufus Sewell version of Middlemarch. Swoon! And I’ve seen Daniel Deronda which made look up Sir Moses Montefiore afterwards. Also both versions of Middlemarch, the more recent one with Emily Watson and an earlier version. Hey did you know that one of Steve Martin’s movies was based on Silas Marner? Yeah Scorpio authors!