First, a happy Thanksgiving to all US readers, and the rest of you, remember it’s Friday tomorrow. (I think this is a duck. It doesn’t look very turkey-like, but I couldn’t resist sharing the joy.)

So, our winners. It was tough. Maggie, bless her heart, wasted a lot of time and so the numbers were on her side (you’ll see more of her contributions below), but this one clearly spoke to me as a winning entry. That look on his face… all is made clear: 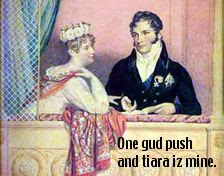 and our other winner is Gemma, who adds this helpful explanation for her entry: In case you’re wondering what she’s wearing…. ladies presented at court had a dress code to follow which included the (then outdated) panniers/hoops of the Georgian era. Instead of wearing a Georgian-style dress, however, they just combined it with the high Regency waist, resulting in maximum wtf-age. 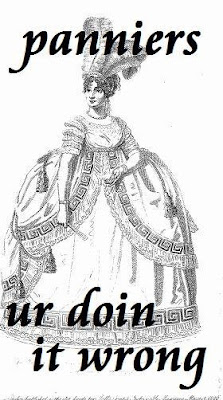 Maggie and Gemma, send your snailmail addresses to jmullany AT comcast.net (you can decipher that, right?) and I’ll send out your prizes!

And the rest–oh, I had fun with these. Keira, who already owns a copy of the Rules (thanks, Keira!) declined to be considered for a prize, but offered these two little beauties: 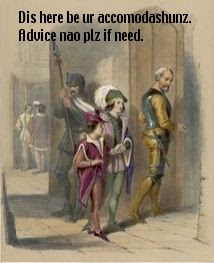 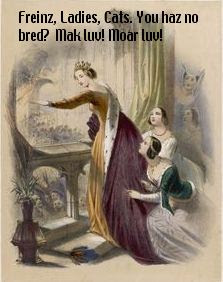 On the left: Edward V and Richard Duke of York Entering the Tower of London.

On the right: The Burning of the Savoy Palace: Eleanor Countess of March Confronts the Mob.

Little did the engraver suspect what our Keira would do to his work.

The lovely and talented Ms. Gaston, who claimed ignorance of LOL anything, showed a remarkable facility for the genre (obviously she was supposed to be writing): 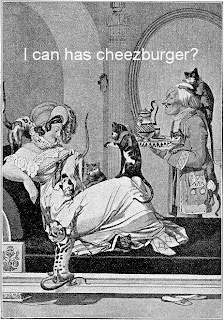 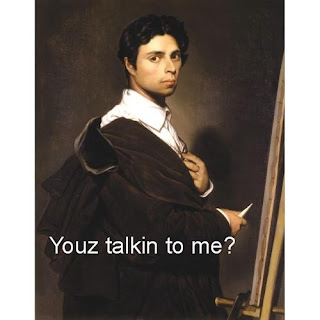 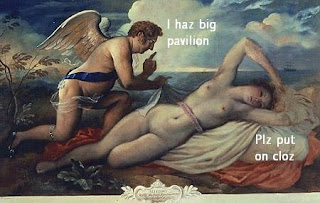 Elena came through with this mind boggler of a piece of serious (?) art, hilariously representing Prinny’s uh, relationship with Brighton (I think). That poor artist… well, if His Highness represents the classical ideal of physical beauty no one will know who it is… A bit more tummy perhaps… a bit more …oops. And the expression of pained, exhausted indifference on the nymph’s face. Note he’s wearing his Order of the Garter too. (Don’t leave home without it.) Priceless. 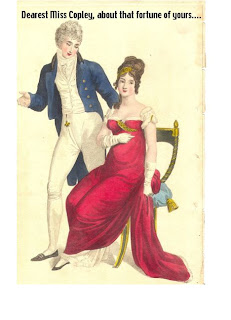 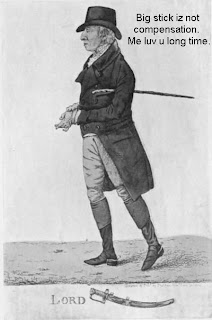 Next, Anke (left) shows us a gentleman admiring a lady’s huge tracts o’ land, and Michelle sent the one on the right, with an apology for it maybe being too risque. Ha. She was blissfully unaware that Maggie was on the job. 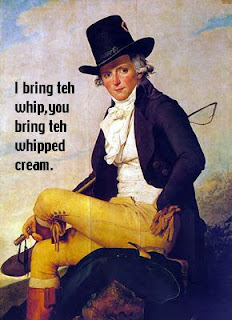 Maggie clearly had time on her hands and a wandering imagination. I was very tempted by all of these, particularly her poignant yet sensitive comment on the inadequacy of Napoleonic birth control, but ultimately it was the tiara one that made me snort tea out of my nose.

Congrats all, and thanks for playing! 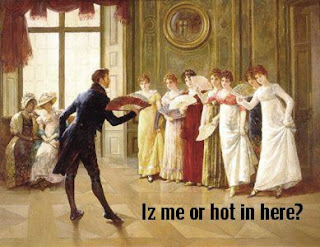 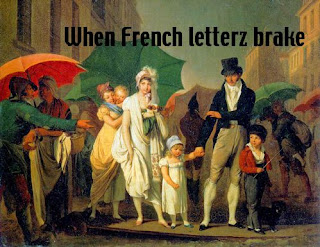 And Thanks to our Risky community.

They are all absolutely wonderful! What a concept. I have to admit my favorite is “When French Letters Broke.”
Happy Thanksgiving everyone!

Thank you, Janet! Yes, I’ll do most anything to procrastinate. 🙂 LOLing is somewhat addictive, but I horrified my visiting daughter this morning re condoms, whips and threesomes before breakfast.Mothers aren’t supposed to know about any of that. Then we had to visit the I Can Has Cheezburger site to explain it all. The day is all downhill from here.

These are such a great start to Thanksgiving! I’m afraid I spent so much time laughing the pie started to singe. I think my fave is also the “French letters” one, but each one is wonderful.

Thanks so much, Janet! Happy Thanksgiving everyone!

Wow, took a break from baking pumpkin muffins (the house smells wonderful!) and now I’m glad I don’t have tea on hand. I can’t pick a favorite.

My own was cheating because the picture itself is so ludicrous. Yes, Janet, it is about Brighton. It’s called something like The Prince Regent Awakening the Spirit of Brighton. If I were she I would rather stay asleep!

These were a scream!! Too funny! 😉

all excellent, but i do agree the tiara one is special

So…. did anyone have to thaw a frozen turkey with a hair dryer??