JANE AUSTEN MOVIE CLUB: what next?

As regular Risky Regencies readers know, on the first Tuesday of every month, we discuss a film or TV adaptation of Jane Austen, or some other Regency-interest film.

We have now run through all the commonly-watched Austen adaptations (and a few less-common ones), plus a smattering of non-Austen flicks. So…what next?

I couldn’t fail to notice that as we moved from the more recent Austen adaptations to the older ones (and the non-Austen ones), the discussions lagged. (The fewest comments came in our discussion of Cranford, and the most from the 1995 Pride & Prejudice.) This makes me leery of doing, say, the 1971 Persuasion or the 1972 Emma…

So after trying to figure out what would stimulate discussion — Scarlet Pimpernel movies? Specific Sharpe or Hornblower movies? — I decided to ask you, our faithful readers.

So let’s have it: which of the following would you have seen & have something to say about, assuming you knew a month ahead of time what would be discussed? (Or are there any you’d like to suggest which aren’t on the list?) 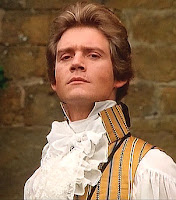 For purposes of clarity, this is the list of what we’ve already discussed:

Looking forward to hearing your opinions!

Cara
Cara King, whose geek interests range from Regency to SF to movies…

Thanks, Cara, for labeling me a geek for liking period movies. 🙂

I’ll have an Ioan Gruffudd (Hornblower), an Anthony Andrews (Scarlet Pimpernel), with a side of Clueless, once every quarter.

Before Susan Wilbanks clobbers me over the head with a heavy, blunt object, let me quickly confess that I have not seen any of the Sharpe films.

I just checked and the older Austen adaptations you listed appear to be available on Netflix. So with some advance notice (and maybe a few friendly reminders!) they might be doable.

Oh, gee. Why doesn’t Hollywood bring out a Regency movie every month?

Shocking as it is, I, who usually have an opinion on everything, have no opinion on this! I like whatever you do, Cara.

I’m eager to see others’ ideas, though.

I like the idea of Sharpes, natch; and Hornblower, which I have, but haven’t watched.

Master and Commander? That Hamilton Woman? Moving beyond the period, all the Wuthering Heights and Jane Eyres?

I adore Anthony Andrews as The Scarlet Pimpernel, so I am always up for that. In fact, I just introduced him to several of my friends. 🙂 I own an older version of the movie too (Lesley Howard, I believe) that I’ve never watched.

I’ve also been meaning to watch the Horatio Hornblower series, so maybe this would be my catalyst? Adore Ioan Gruffudd, yes, I do.

Speaking of Gruffudd, how about Amazing Grace?

Oh, how about a movie called Possession, which stars Jennifer Ehle, Jeremy Northam, Gwyneth Paltrow and Aaron Eckhart. http://www.imdb.com/title/tt0256276/
A pair of literary sleuths unearth the amorous secret of two Victorian poets only to find themselves falling under a passionate spell.

Oooh, Lisa, Possession sounds like a good one. I will have to find it.

I haven’t seen all of the Sharpe films either, Keira, so we will be clubbed together. However, I was at our local flea market with my Mom and spotted four hardbound copies in perfect condition of Sharpe books and I HAD to buy them. (Five dollars for the four of them!!) Of course now I have to replace my paperback Sharpes with more hardbacks so I have the complete set. What kind of geek does that make me?

Oh and Amazing Grace is another good choice for discussion. I also enjoyed Master and Commander as well. And a discussion of the different versions of Jane Eyre and Wuthering Heights may make for a lively debate!

I liked Possession! Not quite as–epic as the book, though, but quite romantic 🙂

I’ve been on a Dickens-watching thing lately, Our Mutual Friend and Bleak House, etc.

Well, it is the only one I presently have that was in your list, but boy would I love to do it regardless, Leslie Howard’s Pimpernel, pretty please!! 🙂 I love him in that one! 🙂

In any case, whatever movies are chosen, it’s probably best to stick with easily accessible ones. The thing with the older 70s JA’s, is that they might not be easy to find (other than online perhaps), or aren’t likely to be on tv.

And in the end, we can always repeat some of them in the future, as I’m sure we have new visitors to the blog who haven’t been here for the original discussions.

And of course, when all else fails, there are 10 Star Trek and 6 Star Wars movies we can do — and ah, well, the Regency connection I’ll leave to you to figure out. I’m clueless. 🙂

Before Susan Wilbanks clobbers me over the head with a heavy, blunt object, let me quickly confess that I have not seen any of the Sharpe films.

No clobbering here! The books are way better anyway…

Thanks for all the input & ideas so far — keep them coming!!!

Megan and Louisa, as to Master and Commander — we did discuss that here, three months ago. (And Louisa, you even commented!) Of course, the M&C discussion is still open, as are all our discussions — so Megan, you can comment anytime the mood strikes you! 😉

Amazing Grace is a great suggestion, but though the Jane Austen Movie Club never formally discussed it, we did discuss it here at Risky Regencies, so I suppose it’s best not to do it again. If anyone wants to comment on our previous post, though, here it is!

Lisa, I’d forgotten about Possession! Todd’s a big fan of the book, so we saw the movie in the theater when it came out. (Plus, we’re big fans of Jennifer Ehle…)
Cara

DOH! I am afraid my writing marathon has fried what was left of my brain, Cara! Just because I like to watch M&C over and over doesn’t mean we need to discuss it. I am definitely looking for Possession as it sounds like a real winner.

And I have always wanted to see Possession, and Netflix makes that all easier, so I’m good to go. And discuss. And comment. And promptly forget.

Can we discuss something, oh, I don’t know… a little less old and English?

Seriously, I just wanted to pop in here and say what fun I have lurking (and occasionally being snarky with) your intelligent, well thought out and well researched conversations. Thanks for the joy you’re creating without knowing it.

A little less old: Blackadder 3! Actually, that would be great fun, and I hearby add it to the list.

Well, there’s St Ives, which half takes part in France, and has some French characters…

Or we could do Sleepy Hollow…

Hey, Rob, I’m both old AND English and you won’t get rid of me!

How about Onegin–I’ve never watched it all the way thru but the bits I’ve seen have been lovely (stars Ralph Fiennes and Liv Tyler).

I’d also love to discuss Princess Caraboo, The Madness of King George, Vanity Fair. (all suggested by Erastes, thanks!) I’m not so keen on the series tho if we’re going to do any, let’s consider Middlemarch.

We could always do Gosford Park and Vanity Fair which may be English but isn’t that old.

How about Shakespeare in Love?

Possession is a good suggestion; the book was fabulous, though (sorry Todd!) I can’t imagine Ehle in the role.

Perhaps Scarlet Pimpernel (Andrews) can be followed by A Tale of Two Cities.

The movie Possession was OK–the Victorian pair (Northam and Ehle) were better than the modern pair (Paltrow and Eckhart), though all four are actors I admire. Possession is one of my very favorite books ever, so I went to the film expecting to be disappointed. And I was.

I was just at a SF convention, where I attended multiple panels in which it was pointed out that a film adaptation is always different from the original book, and should be judged on its own terms. In the case of Possession, the original book is very rich and complex. Only a small part of that can be captured in a movie.

I’m pretty much up for anything, though. Bring it on!

How about Lost in Austen? But I don’t know if you have it on the western side of the pond.

Gosford Park is awesome and Blackadder 3 (it has Hugh in it :P).

I like Posession, just because of Jennifer. And Wives and Daughters is quite good, but dunno if it exists on the west side…

Gosford Park is awesome and Blackadder 3 (it has Hugh in it :P).

You know, I started watching House at first because I just *had* to see Hugh Laurie in something where he wasn’t being farcical. (Okay, I’d seen that in Peter’s Friends long ago, but it was pretty brief.) At this point, I bet a lot of folks would be startled to see some of his earlier work. 😉

And we don’t have Lost in Austen — not yet, anyway! Hopefully they’ll bring it out here soon…