First: the schedule for the next five months of Jane Austen Movie Club — watch the film ahead of time (or go from memory), and come prepared to discuss! (Remember, our discussions are always the first Tuesday of the month!) 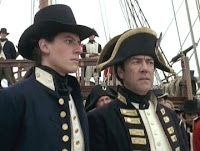 April 7: THE MADNESS OF KING GEORGE

I’ll write the beginning of the story, and anyone who wishes can continue the story in a comment…a sentence, a paragraph, whatever you like! Then the second comment can continue from the first…and eventually, we’ll have a (certainly bizarre) little story! (And if you like, you can keep coming back and adding to it — you’re not limited to one comment!)

THE CAT IN THE CRAVAT

On the first of May, in 1813, Almack’s was a frightful bore…until six minutes past ten, when a giant white cat in an exquisite coat by Weston strolled through the doors.

18 Responses to COMMUNAL REGENCY STORY: The Cat in the Cravat