Sometimes here at Risky Regencies we like to talk about some Risky Non-Regencies, as well! Historical romance settings that are maybe a bit out of the mainstream, a bit harder to find, but well-worth the search. Today, Amanda will start off this Unusual Historicals discussion, and tomorrow two Harlequin Historicals authors, Michelle Styles and Michelle Willingham, will join us. Two lucky commenters this weekend will win autographed copies of either Michelle S’s Viking Warrior, Unwilling Wife or Michelle W’s Her Warrior Slave… 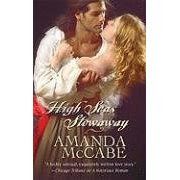 Pirates, passion, and danger on the high seas!
Balthazar Grattiano, captain of the infamous ship Calypso and renowned seducer of women, has just walked into the one tavern in all of Hispaniola he should have avoided. For Bianca Simonetti, his sworn enemy, is the owner–and she has vengeance on her mind…

But before she can take her revenge, she is captured by this rogue’s kiss. Her only chance for retribution is to stow away on his ship for a passionate adventure that will either kill them–or bring them together once and for all!

“Smell the salt spray, feel the deck beneath your feet, and hoist the Jolly Roger as McCabe takes you on an entertaining, romantic ride!” –RT

So, Amanda! 🙂 Tell us what historical periods are the settings for your books? And what are some settings that interest you?

So far, I’ve written books with Regency settings, as well as the Renaissance (1520s Venice, the Court of Henry VIII, and the Spanish Caribbean in the 1530s, as well as a WIP set in Elizabethan England). And I will have a trilogy come out in (tentatively) 2010 from Grand Central Publishing, set in Ireland around the 1798 Rebellion.

As for settings that interest me–hmmm, where to start! I love 18th century France (both pre and during the Revolution), the English Civil War, 19th century Russia…

What draws you to “unusual” historicals? What are some advantages/disadvantages?

General history geek-dom is what draws me in, I think! I find the way people lived in the past, how they are different from us and yet also fundamentally the same, fascinating. I’ve always wondered–what would it be like to defend a castle from Cromwell’s army (as Lady Derby did in 1644), or dance at Almack’s, or sail the Atlantic in a carrack? The research and writing of these stories lets me do that, and helps me prevent “writer burn-out”. I’m never bored, or short of “what-if” ideas! Plus so many of these time periods have such great clothes.

One drawback is a smaller market, I think. Settings like the Regency or the American West can feel more iconic and “familiar”, maybe, easier to slip into the fantasy. (Though I have to say “unusual historicals” don’t necessarily have to also have an unusual setting. Writers like our own Risky Diane Gaston can bring in aspects of Regency life that aren’t so widely known or often seen in romance fiction! I’m always learning new things from her books)

Another drawback can sometimes be a shortage of useful research material. For some settings, like Elizabethan England, there is no lack at all! But I had more of a challenge with the early Spanish Caribbean. Hooray for inter-library loan!

Which leads me to…

Tell us about your research material! What are some favorite sources?

Like I said, I luv libraries! The people at my local public library are wonderful–they’re always asking me what I’m researching now and giving me great suggestions. I’ve also found a fun resource in online groups of reenactors and scholars (which can also work great for promo! I actually did a booksigning at a Renaissance faire last year, and had a fabulous time).

Travel is a great help, too. To see where the stories are set adds such a richness in my mind! After seeing Versailles, I’m determined to write a story set there! That’s not always feasible, though–sometimes I can only afford a book, LOL. And sometimes the places are simply no longer the same (like the Caribbean–huge difference between 2008 and 1535. Though it was tempting to claim I needed to research beaches and Mai Tais…)

What are some unusual historicals you would recommend to readers?

Michelle Willingham and Michelle Styles both do wonderful books with richly-drawn settings! I also enjoyed Hope Tarr’s book Enslaved. And Claire Thornton’s Restoration-set trilogy, and Mary Reed McCall’s Templar’s Seduction are all great romance choices! (I’m sure I will think of 50 others as soon as I finish this blog)

In historical fiction, I recently read Elizabeth Robards’ With Violets (about Berthe Morisot) and Christie Dickason’s Firemaster’s Mistress (about the Gunpowder Plot).

And I grew up on Victoria Holt books, as well as Barbara Cartlands that had a variety of settings–this was what got me started on reading non-fiction, wanting to know the story-behind-the-story of these novels. 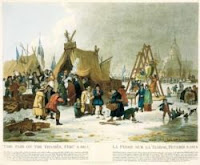 I’m finishing up the Elizabethan story (set during the Christmas season of 1564, when the Thames froze through and there was a Frost Fair), the Ireland books, and possibly some stories set around the Elizabethan theater and the Court of Marie Antoinette. In May, there will also be my anthology with Diane and Deb Marlowe, The Diamonds of Welbourne Manor, about the Fitzmanning family–a very “unusual” family indeed! And in 2010, look for the US release of my Regency “Muses of Mayfair” trilogy with Harlequin Historicals.

Now it’s your turn! What are some interesting books you’ve read lately? Any settings you’d love to see out there? Any you’d like not to see???

Amanda, I’ve said it before, but I’m always amazed at the range of periods you can write. My own research into the Regency makes me comfortable enough to stray a bit earlier or a bit later–stories that could be for the parents or children of Regency characters–but to range so far abroad takes something special. Do you find you have to adapt your writing voice a bit to catch the mood of different periods?

As for unusual settings, I’d like to see more Peninsular War stories. A flavor of Sharpe but with proper romance.

General history geek dom!
LOL. I think it says it all.

I can’t wait to read your latest.

I’d love to see more Peninsular War stories, too, Elena! I think you should write one. 🙂

I don’t think I necessarily adapt my “voice”–I like slightly darker stories and characters anyway, no matter what the period, so the style is basically the same. But I do have to adjust attitudes of the characters, and the atmosphere they live in, as well as the cadence of the language in dialogue. And each era has its own fun swear words! 🙂

I love seeing exotic story settings! It’s such fun. 🙂 I really enjoyed your Shipwrecked and Seduced.

The other day I ran into a historical tidbit on the Scottish Clearances, and my brain started racing with story ideas. Such fun!

Amanda, I misspoke when I used the term “voice.” What I meant was more the style of writing that conveys something of the spirit of the time period. You do it well!

One of my other favorite authors who does this brilliantly is Jo Beverley. There’s a different feel to her medievals vs her Regencies vs her Georgians but yes, the voice is the same.

Oh man, yes! I read Carrie Lofty’s debut, What a Scoundrel Wants recently. Set in Robin Hood’s Sherwood and Nottingham, it’s a great book and definitely unusual historical romance (both in setting and time period, and in characters–I reviewed it here if anyone is interested)

Congratulations on your latest release, and how nice of you to recommend ENSLAVED. The whole Victorian London music hall scene was a lot of fun to research and yes, write.

I too would love to see more Peninsular War set Regencies. It was a fascinating conflict and one of the first times, if not the first, where guerilla tactics were used on a grand scale to great effect.

My first book, A ROGUE’S PLEASURE had the prologue written at the Battle of Albuera, and the hero suffers from flash backs and other symptoms of what today we would call Combat Stress Syndrome throughout the book. Still, in most Regencies, including mine, the war is back story. It would be cool to have the romance set in Portugal/Spain proper, like the Sharpe series where Sharpe falls in love with a beautiful resistance fighter.

I echo Elena in saying I cannot believe how many settings you are able to write in.

I’d like to see more Regency folk abroad, dealing with other cultures just as we read about their ‘other’ culture.

I do like reading about other settings. I recall I started reading Fawcett Coventry books way back when, mostly for their Regencies — but Coventry did a wide range of time periods, so I ended up reading those too. I was particularly taken by the Edwardians! That would be a fun period to read more about, IMHO…

Wow, I’m really intrigued by all these periods you write in. What fun!

“I was particularly taken by the Edwardians! That would be a fun period to read more about,”

I think this would be a great period, too! Among other things, the clothes were gorgeous. 🙂 (I really enjoyed Nicola Cornick’s recent Edwardian, “The Last Rake in London”)

“I read Carrie Lofty’s debut, What a Scoundrel Wants recently.”

I have heard such great things about this book! It’s definitely on my TBB list when I (hopefully) get some gift cards for Christmas. 🙂

“There’s a different feel to her medievals vs her Regencies vs her Georgians but yes, the voice is the same”

That’s a good way to put it, Elena! It’s true that it wouldn’t work to take, say, Regency characters, plunk them in doublets and farthingales, and suddenly expect them to be Elizabethan. 🙂

Hi Amanda! Congratulations on your latest release! I can’t wait to read High Seas Stowaway! I love history and am particularly interested in the Revolutionary War era, The French and Indian War, English Civil War, and the French Revolution. History just seems to fascinate me and having a romance set against such historical backdrops is wonderful! Thanks for the interview! I enjoyed reading it!

Ammanda, I like to see you talking to yourself. 🙂

If you’re handing out tickets to that beach or even invitations, you have my “thank you” and “I accept.” When are we leaving??

And of course, it’s all about the clothes (and if we’re talking the Georgian, then it’s the shoes).

I’ll take anything you write, but most especially France in the 18th century and an Elizabethan.

Have you found different online groups of reenactors and scholars for all the various stories you write, or is it more of a larger group with niches?

A big hurrah for History Geek-dom!
Do you unsual historical writers have a blog of your own?

“Have you found different online groups of reenactors and scholars for all the various stories you write, or is it more of a larger group with niches?”

I’ve mostly worked with Renaissance-interest groups (have found branches with interest in both Italian and Elizabethan), plus some costumers’ groups and Renaissance faire people. I’m sure there must be some Regency/Napoleonic groups out there, too!

And I agree–18th century shoes are the BEST! 🙂