This week, we’re supposed to be talking about our first Austen…but I’ve done that before here at Risky Regencies, so I thought I’d thrown in a little twist…and tell you what my first (and later) reactions were to my first several Austen novels and movie adaptations…

The first time I read PRIDE AND PREJUDICE, I was thirteen, and I utterly loved it. (That part has never changed, though I do understand certain parts better now.) 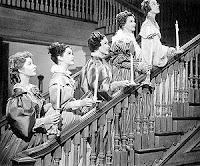 I believe the first Jane Austen movie I ever saw was the Greer Garson/Laurence Olivier PRIDE AND PREJUDICE, when I was a teenager. I liked it well enough, and for a while it even messed with my own memories of the book, leaving me with a vague belief that the book involved a lot of archery, and that Lady Catherine wasn’t all that bad in the end… đź™‚ (When rewatching this at various times years later, I think I most admired Olivier’s interpretation of a shy Darcy.)

The second Austen adaptation I saw was the 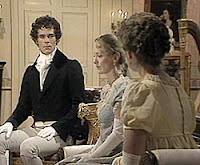 Rintoul/Garvie PRIDE AND PREJUDICE, also when I was a teenager. I liked it all right, but it didn’t excite me, and I definitely thought it inferior to the book. (The second time I saw it, I loved it. The third time, I was less enchanted, but really loved Garvie.)

Then, freshman year in college, I read NORTHANGER ABBEY. I was initially disappointed that it wasn’t more like PRIDE AND PREJUDICE, and wished there were more romance, and less satire. I really didn’t care for the implication that Tilney liked Catherine better for being ignorant! (I have loved this book more and more on each rereading…perhaps because I now read it for humor, while picturing Bath, and I ignore what I don’t like.)

Then I saw the 1986 BBC NORTHANGER ABBEY, and hated it! I thought Peter Firth was creepy, and the overemphasis on the Gothic bits just silly. I’ve always thought those were the weakest parts of the novel, so the idea to make them even more prominent just seemed wrong to me! (The second and third time I saw it, years later, I think I admired the costumes and Bath scenery more…but Firth and the Gothic bits have always seemed wrong to me.)

Next, I read SENSE AND SENSIBILITY, and was annoyed at how Marianne just ran on and on, and how Brandon didn’t have the sense to fall in love with Elinor. (This has remained my least favorite Austen…and I confess I’m always surprised when I run into anyone who puts this in their top two! I just see major weaknesses in it…)

Cara
Cara King, who hopes you all show up the first Tuesday in January to discuss the first Gruffudd Hornblower adaptation!!!