I can’t remember my first. 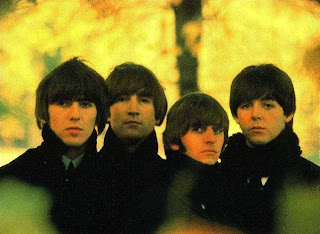 What an embarrassing confession. I know that I had my massive teenage Heyer binge after I read Austen, which must have been for high school, because I remember telling my English teacher that Heyer was just like Austen. Hmmm. But I can’t remember which book it was, although I remember earlier listening to girls complain about having to read P&P and it was so boring. Ha. The rest of us were blessed with Silas Marner, chosen, I’m convinced, because it was the shortest George Eliot–that it’s also complex and difficult apparently wasn’t a problem for a bunch of teenage girls who were really only interested in John, George, Paul and/or Ringo. 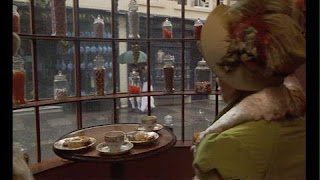 I remember watching something on a black and white TV with terrible reception and realizing, despite the blizzard onscreen, that it was the BBC Persuasion (the one from long ago) because I recognized the words. But I really fell in love with Austen after college, when I lived in Bath, and found that you could retrace Ann and Wentworth’s steps through the city.

And she’s been pretty much a constant in my life ever since. Every time I reread one of her books I find something that relates to where I am at that time–falling in love, falling out of love, married, unmarried, being a parent, growing older. Her novels offer consolation, inspiration, and a challenge. I admire Austen’s toughness, her unflinching clarity on family relationships.

Here’s a great poem by Kathe Pollitt, Rereading Jane Austen’s Novels, which I borrowed from a collection of Austen-inspired poems at pemberley.com. It’s bleak and biased, and not altogether accurate–Lizzie Bennett thinks nothing of a five mile hike (in the mud)–but I hope you’ll like it.

This time round, they didn’t seem so comic.
Mama is foolish, dim or dead. Papa’s
a sort of genial, pampered lunatic.
No one thinks of anything but class.

Talk about rural idiocy! Imagine
a life of teas with Mrs. and Miss Bates,
of fancywork and Mr. Elton’s sermons!
No wonder lively girls get into states —

No school! no friends! A man might dash to town
just to have his hair cut in the fashion,
while she can’t walk five miles on her own.
Past twenty, she conceives a modest crush on

some local stuffed shirt in a riding cloak
who’s twice her age and maybe half as bright.
At least he’s got some land and gets a joke —
but will her jokes survive the wedding night?

The happy end ends all. Beneath the blotter
the author slides her page, and shakes her head,
and goes to supper — Sunday’s joint warmed over,
followed by whist, and family prayers, and bed.

And remember, this week we’re holding a contest for Austen’s birthday–so comment often and early!

I think the “5 miles” lines are meant to refer to the relative freedom men had in that era compared to women, at least in that class system. Not necessarily that she can’t walk five miles, but that she can’t do it “on her own”: ie., that everyone is always watching an unmarried girl.

A wonderful Austen quote I found just yesterday and put on my blog:

I am not at all in a humour for writing; I must write on till I am.

The poem is sad, isn’t it. Or maybe I mean melancholy. I like it, though.

How I understand the John, Paul, Ringo, and George days! Through the Beatles I let my love of all things English flower, but I think my Anglophilia began earlier than that – maybe in Dickens or maybe in memories of a past life. Maybe I was Jane Austen’s maid of all work…or maybe Wellington once smiled at me.

Interesting poem: proves that one can see read almost anything in Austen.

As for Lizzie walking 5 miles, Caroline Bingley and Mrs. Hurst did criticize her for it. I think ladies of higher classes (and especially heiresses) didn’t have as much freedom. But I still remember a critique group telling me my first heroine (a vicar’s daughter) couldn’t walk out by herself. I tried using Lizzie as an example but too few of them had read P&P. Sigh…

Pam, I love that quote. I am tempted to embroider it into a sampler and hang it over my writing space. But that would be procrastinating, wouldn’t it? 🙂

I sign of how times have changed: in college I shared a phone with Katha Pollitt and 3 other girls. Now everyone comes to school with her own cell phone. Katha was definitely one of the smartest people there. One of the few times I’ve ever been able to impress one of my children was when I took my son to hear Katha read from one of her books, and she remembered me.

I definitely did NOT like the poem- guess I’m just not in the mood for negative.

Janet, the holiday net of family relationships descended upon me today. I shall take heed of the quote Pam supplied.

Only I haven’t written for a few days, so hiding and writing till I feel better might well produce a systemic blow-out. I can always blame it on the shrimp cocktail.

PS In case anyone is curious, I’ve posted a sample book cover for my latest book on my web site. (I am also an illustrator.)
http://www.jcgeorge.net/welcome_to_circus_fantastique

Yes, a bleak poem indeed. But, for some reason, I like it.

Janegeorge! What a talented lady you are! Love the illustration and the story.

And I’ve copied your list of Austen words. How useful!

Yes, please! Everyone help themselves to the Austen vocabulary list I culled from her books. It should be used! There’s a link to my site on my Blogger profile. I’d quite forgotten about it. Hmmm.

Diane, I wasn’t surprised to read here that you listened to Austen on tape when you started writing. To my mind your period “voice” is spot on.

There may be a touch of melancholy in the chill air tonight. Here’s some cyber mulled wine and a toasty fire for everyone!

I really enjoyed poem. Its was different but I liked it.

Janegeorge, thank you so much for the kind words about my “voice”

Elena, can you make a sampler for me, too? 🙂

It’s a gray, foggy day here, so I liked the poem. It seemed to suit the moment.

Wow, I love the illustration, Jane.

As for Katha Pollitt: I gave every woman on my list (and my son) a copy of her memoir, Learning to Drive: And Other Life Stories, last year. I read her book of poems, Antarctic Voyager, as though it were a can’t-put-it-down thriller. And I’m looking forward big time to her next book of poems, The Body-Mind Problem, out in a month or 2.

I liked the poem–but I must admit, reading Jane Austen never makes me feel like that! 🙂

Still, it’s been cold and rainy recently (for Southern California, anyway), so perhaps a bit of melancholy is not out of place.

OMG. I remember Silas Marner. Or rather I don’t. My sophomore English teacher assigned it. If someone put a gun to my head, I could not tell you one single thing about it. Not one. Off to google.

I do love that poem. Bittersweet.

I like the poem. It is a bit melancholy, but it touches on so many of the things that make Austen and the Regency appealing to me. Sometimes even the negative can be appealing.

I have to agree that The Divine One’s Regency voice is so natural it is truly amazing. And I’ll bet Wellington did more than smile at you!

Pam, that is the perfect Austen quote and it IS going on a sampler for my writing studio as soon as I finish my brother’s darn Christmas quilt!

Off to check Jane’s creativity!

I haven’t read any of her books in a while so I think this week will inspire me to pick up a Jane Austen novel after the holidays are over.

I tend to agree with some of the comments that the poem is a bit of a downer. Maybe it would be better after a few glasses of glögg.

some parts of the poem I understand and agree with but other parts I don’t.
Thanks for sharing it.