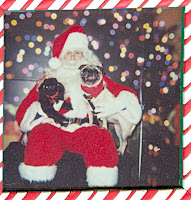 My first Austen was Emma! I read it when I was about 9 or 10, and like all my reads at that time was supplied by my grandmother. She went to lots of garage sales and thrift stores as well as regular bookstores, and lots of people gave her books, too. So there were always boxes of wondrous paperbacks stacked in her hall closet, oodles of Heyers, old Fawcett Regencies by authors like Joan Smith and Marian Chesney, Cartlands, and classics. When we visited her in the summer, I would hide in that closet to get away from my wild cousins and read, read, read! 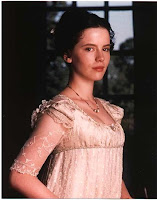 An old copy of Emma was in one of those boxes, and as I was currently on a 19th century England obsession, I was delighted. I had just finished Jane Eyre and loved it. Emma was a very different book, with a very different heroine, but I loved it, too.

At the time, I knew little about Austen and her stories and didn’t realize that: 1) there was a ‘mystery’ in the story (I took it for granted all along that there was something going on between Jane Fairfax and Frank Churchill, and Emma was silly for not seeing it. On the other hand I was shocked–SHOCKED–by the appearance of Bertha-in-the-attic in Jane Eyre, so was not a very perceptive child), and 2) that I was not supposed to like Emma.

Austen herself wrote, “I am going to take a heroine whom no-one but myself will much like.” But how could I help but like her?? She was “handsome, clever and rich”; everyone in the story seemed to like her; and she seemed well-meaning and good-hearted, even if her schemes didn’t often work out very well. She had perhaps “a disposition to think too well of herself,” but at age 9 I liked her self-confidence, her popularity and sense of belonging, and the cozy little world of Highbury. I guess I still like those. 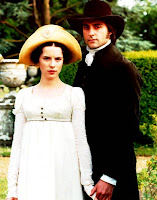 Later on, I was surprised to find that Emma was unique among the Austen heroines in that she had no financial concerns (unlike poor Jane Fairfax!). Her worries were more subtle. She was an intelligent woman who wanted to do good, even though she was not sure how to achieve that to the best ends. She had little to engage that intelligence, so perhaps it was mostly boredom (plus a lot of that self-confidence!) that led to her misguided machinations? She really had no power to change her location or routine, which, as a shy and dreamy 9-year-old who wanted to be Jane Eyre, I identified with strongly!

After Emma, I ran to the library and grabbed the other books, quickly consuming Pride and Prejudice (plus a video of the Rintoul/Garvie series), Sense and Sensibility (I liked the sisters in that one!), Northanger Abbey (Catherine was my favorite heroine at that age), Persuasion, and Mansfield Park. I didn’t much like Persuasion and MP then–I was just too young for them, I think, much like Wuthering Heights, Middlemarch, and Madame Bovary (no, my parents didn’t pay much attention to my reading habits!). Persuasion is now possibly my favorite book of all time, but I do have a soft spot for Emma. Thank you, Miss Woodhouse, for starting me on this journey! 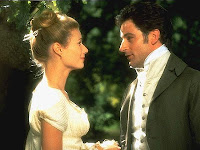 I like both the ’96 film versions of Emma (Paltrow and Beckinsale) though they are very different from each other, and neither is quite the story in my head. I’m not sure such a thing is even possible! I’m just grateful for all the Austen books and films out there to fill my rainy days. They always brighten things up.

Happy Birthday, Jane! From all your fans here at Risky Regencies.

(And check out High Seas Stowaway on Eharlequin for special savings this week. What could be better in a cold December than warm, sandy beaches and hunky sea captains??)

I’m pleased Santa was willing to be photographed with the four-legged children, too. How about a picture of all your four babies? 🙂

I loved Jane Eyre, too. For some reason, it was easier for me to identify with Jane Eyre than with Emma. Emma was a toughie for me to fathom; what was the point behind the frivolity? While the plot seemed insubstantial, Emma’s observations and tart rejoinders, plus her ease of conversation with Mr. Knightley were all fascinating. Especially that last bit, because at that time, I found boys to be a foreign species, having attended a girls’ school.

Emma was a tough read for me as a teenager, not because she was difficult to fathom but because I did understand some of her flaws. I wasn’t at all confident, rich or handsome at that age, but I did and still do have this impulse to do good linked to a fear of blundering in the process. I wasn’t comfortable with that at the time and wanted heroines to be smarter than me. Now I enjoy Emma’s blunders; they make me more comfortable with some of my own.

I read Emma fairly recently, comparatively speaking. One of the books I read after deciding to write and after seeing the movie Persuasion. I agree with Jane Austen. Emma was a heroine who I didn’t much like, in spite of understanding that she meant to do good. Moviewise, I liked the Kate Beckisale version better than the Paltrow version. I do get impatient with these movies that cast Americans in roles that could be played by any number of wonderful British actresses.

I remember loving Jane Eyre as a child and hating Wuthering Heights. Books where everybody dies at the end are not my favorites.

I read Madame Bovary somewhere along the way, but I don’t remember it! I slogged through Vanity Fair, too, at some point.

Anyway, this was a very fun week!!

It really was a fun week. You have no idea how much fun it is to discuss writers like Austen and Heyer with people who love them, have read them, know who they are and “get” them!!

I had to read Madame Bovary in French for my French literature class in college. It was part of my minor in French. I can tell you it is even worse in French. I just didn’t like that book.

I normally don’t like books where everyone dies in the end. (Hence my distaste for all Nicholas Sparks except The Notebook.)But I did LOVE Wuthering Heights. I have a thing for really flawed heroes, if you can call Heathcliff a hero.

I think I am rather ambivalent about Emma. Sometimes I read it and I like her, sometimes I don’t. Must have something to do with my mood at the time.

I have always loved Persuasion! But P&P is forever my favorite. Darcy! SIGH!

And Amanda your fur babies are TOO CUTE!!

I also LOVE Jane Eyre. And, while no book ever written or as yet unwritten can ever displace P&P as my favorite book, Persuasion is now a close 2nd. I do believe that Persuasion, written by a mature Austen, is meant to be read by those of us old enough to have regrets.

“How about a picture of all your four babies?”

Sadly, the cats refuse to leave the house! The few times they have to go to the vet, there is much screaming and growling. I don’t think Santa would appreciate it. 🙂

When it comes to Austen heroines I’d like to hang out with, maybe drink some tea and have a little chat, Emma is pretty far down there (but above Fanny Price!). I would be afraid she would try to set me up in some unsuitable match, or try to dispense charity (since I live in a little Bates-ish “cottage”)! But I like reading about her and how she learns her lesson about herself and the people around her. Keira, that is a good point about her ease with Mr. Knightley–I like that, too. Despite the age difference, they seem so comfortable together.

Louisa, I also love Wuthering Heights! I didn’t when I first read it–it is definitely not happy (even young Catherine’s ending, while technically happy, seems a bit of a bad deal to me), and the characters are beyond dark and complicated, yet I love that darkness

I think I’ve always been a fan of Emma and I’ll throw ‘Clueless’ into the mix. I really enjoyed that movie even more so after I learned that it was based on ‘Emma’. As you all know, I’m an Austen-Come-Lately.

Amanda, your babies are adorable. I don’t think I could ever get our Boxer to pose. Too hyper by half.

Diane wrote: I do get impatient with these movies that cast Americans in roles that could be played by any number of wonderful British actresses.

The way I see it, Diane, British actors are constantly playing American roles (everyone from Nixon to Zorro to House to Batman), so an occasional turnabout is fair play… 🙂

I confess I’ve never read Madame Bovary, BTW! And after reading all your comments (especially Louisa’s), it somehow didn’t just move to the top of my TBR stack! 😉

Santa, IMHO Clueless got Emma right in one way that no other adaptation I’ve seen has…it shows why everybody loves her so much, which I think is central to explaining the story…

I read Jane Eyre when I was young and did love it but never read any Jane Austen until fairly recently. I liked Emma because I had a teenaged daughter at the time and her behavior made sense to me.

What a cute pic!

And I am still too young to appreciate Emma, I think, since that is my least favorite Austen.

I read many of the same books you did, Amanda, and look how well we both turned out?

I love Emma even though she was a meddler. I dragged my friend to see the film when it came out.

Oh wow! you read the book Emma at the age of nine or ten. In this day you can’t get a nine or ten year old to even read. They seem to think they have better things to do these days.

“I read many of the same books you did, Amanda, and look how well we both turned out?”

We should write a how-to-raise-interesting-children book, LOL!

Virginia, I think I was a weird kid–I always would rather read a book than play video games or do anything else. I loved the worlds in my head. Guess I still do. 🙂

I loved Jane Eyre but P&P remains my favorite. And, I’m like you, Amanda, I always would rather read a book than do anything else.

When I was a kid I also read all the time by preference. But I seem to have made the transition to reading adult (or should I say, “non-children’s”) novels at a somewhat later age than you, Amanda–probably when I was 11 or 12. And for a long time I mostly read fantasy and science fiction, and occasionally mysteries, for pleasure, reading more “literary” stuff mainly for school. I’m still trying to fill in the gaps in my knowledge of literature.

In any case, I didn’t read Austen until I was an adult. I did read Jane Eyre as a teenager–but I can’t say I really identified with the heroine. 🙂