Last year, I posted a copy of my annual faux-holiday letter (or, more correctly, my holiday faux-letter) here…and it got very few comments. Which may mean that no one’s interested.

But when has that ever stopped me? (After all, I’m supremely lazy, and I also believe that recycling is good for the environment.)

So here, unrequested, is a copy of my 2008 holiday-card-letter-insert-thingy: 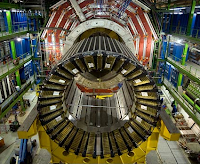 Greetings from the House of Books! My, a lot happened in 2008…

First: you may have heard of the Large Hadron Collider, a joint project by 100 countries and 10,000 scientists to discover sub-sub-atomic particles, further our knowledge of the universe, and win grant money, all while not creating a giant black hole that would eat the planet. The Large Hadron Collider succeeded in its last aim, but ran into a temporary snag on everything else.

What you may not have heard of was the Large Feline Collider, a joint project by two humans to discover super-super-evil kittens, 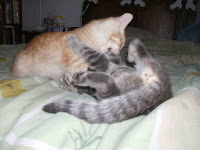 further our knowledge of caring for lacerations and broken vases, and waste vast amounts of time saying intelligent things like “oh, what a cute tummy!” and “no, you can’t sleep in the fruit bowl,” all while creating two giant cats that would eat us out of house and home if only they could open their jaws wide enough. The Large Feline Collider succeeds in colliding with great destructive force several times a minute, with such energy that it turns any nearby object into several smaller objects.

I found sudden fame online this year, after my scholarly essay JANE AUSTEN’S “BATMAN” gained unexpected popularity with the surprisingly large intersection of the following three sets: (1) people who read Jane Austen, (2) people who saw THE DARK KNIGHT, and (3) people who think I’m funny. (I had until recently thought that the only member of all three sets was Todd, but apparently he has been joined by John Scalzi, several Australians, one of my long-lost friends from junior high, and a penguin.)

In other news, my novel MY LADY GAMESTER was translated and published in Germany. The part I don’t understand: in the book, the heroine’s little brother is a very bad student, struggling even with basic Latin. So how can he suddenly speak fluent German? Surely no lazy schoolboy could guess that the German word for “Elephant” is “Elefant”!

In still other news, it seems my cat has been running a Ponzi scheme, and has singlepawedly ruined the world economy. When asked to explain himself, he gave a muddled answer which included the words “mew” and “it wasn’t me, it was the evil aliens from Pluto.” (Sources close to the feline tell us that he once drove to Pluto in a Hyundai and unintentionally taunted the inhabitants about their deplanetation, giving the Plutonians a cold grudge against the hapless Earth cat. However, sources even closer to the feline say “he’s dirty as a three-dollar bill, and could really use a bath.”) 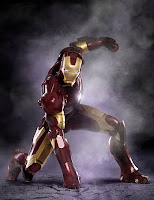 In national news, 2008 was a momentous year. Senator Barack Obama built himself an iron man suit and defeated the terrorists, the pessimists, the paparazzi, and the Volturi, to win the American presidency and become box-office champ. (Sources close to Obama once overheard him mutter “Yeah, I can fly.”) Mr. Obama’s next goals are rumored to be saving the TV show “Pushing Daisies” and improving his high score at “Rock Paper Scissors Lizard Spock.”

So, does anyone else out there have a Large Feline Collider? An Iron Man Suit? A time machine?

No cool implements here or back home. However, I’ve been promised a ride in the time machine being built in a particular basement by A Gentleman. And this time machine travels in parallel universes, see, so that I get to enjoy all the advantages of my current life minus all the nuisances.

So…the snag with Le Hadron was that 20k scientists were required instead of 10k? 🙂

Thank you for the paean to Obama. I’ve tried (OK, Megan, sorta tried) to stay off political topics on anything other than my personal LJ, but in an annual summary he definitely deserves a tip o’ the hat.

I do a Christmas newsletter too, but mine is nowhere near as creative as yours and features no cats or colliders whatsoever.

But last year I made it look good when my son and his wife had a baby and got divorced in the same year. This is why I write fiction. But the black hole would have come in handier.

Our own holiday newsletter is more the usual fare: what the kids are up to, editing out some of the stuff that not everyone can handle. In other words, some creative writing but based on the real story.

No cool gadgets here though my husband and I wish someone would involve a Pause button that stops everything else so we can catch up. 🙂

I like Elena’s idea of a pause button! Or a time machine to take me back and add more time to deadlines. Or more time to procrastinate. 🙂

I enjoy reading other people’s letters (especially ones like yours, Cara! My cousin who tells how Utterly Perfect her kids and life and everything is–not so much, LOL), but I don’t write one of my own. It would just say “worked, wrote, shopped for nail polish”

I don’t do a Christmas newsletter. I’m saving that for when I am published, IF I anyone I know is still alive by then. My new goal is to be the oldest debut romance author in history!

Love your newsletter, Cara! Especially the Cat Collider part! Too funny and I know exactly what you mean.

Okay, Maggie, I have to admit that would definitely liven up a newsletter. Real life is usually much stranger than fiction!

I think my newsletter would have to be written by the furry members of the family. They have far more spare time than I do and they pretty much run the house!

The Hadron Collider Snag was actually a *tiny* black hole.

My feline collider is also on the small side. The rescue kittens were so compromised that they’re not going to get very big. Their destructive capabilities remain huge, and amusing. The two older cats don’t collide much anymore, at least not on purpose. Their job is to ooze over the furniture like warm brie.

Great X-mas letter, Cara. I wish the other ones I got were like yours!

I have one thing to say about your kitten colliders….Awwwwwwwwwwww

I think you’re funny, too. And I like to delude myself that that means something since I’m an aspiring comedy writer *g*.

A penguin who likes Batman, huh. I wonder how that conversation would go. “Mr. Batman, I’d like to express my grave disappointment at the stereotypical negative protrayal of my avian sub-species compared to that of the robin. This is gross discrimination of our non-flying disability.”

What a wonderfully clever letter! I think my favorite part is the “Feline Collider.” Thank you for sharing it.

Keira wrote: However, I’ve been promised a ride in the time machine being built in a particular basement by A Gentleman.

Aha! But…promised in the future, or in the past? And if the gentleman were a gentleman of his word, would he not have already taken his time machine back in time and done it?

And thanks for the w00t on Scalzi! He had a link to JA’s Batman for a while on his (ever so popular) blog…and last month, Todd and I attended a SF con at which Scalzi was the Guest of Honor, and I had a chance to thank him for doing so, which was cool!

Maggie Robinson wrote: But last year I made it look good when my son and his wife had a baby and got divorced in the same year. This is why I write fiction.

Elena, I’m with you on the pause button! And while we’re at it, I’ll take a rewind button. For things like when I’m at the grocery store and realize I forgot my list!

I’m with you there, Amanda! In fact, my faux-holiday-letters arose when a friend and I, shortly post-college, were so amazed by the holiday letter of a friend’s parent…because we knew all that had actually happened in the family that year, and everything was changed about so much in the letter that it was clearly fiction!

(For example, they might write something like “Hermione discovered a love of teaching this year, and has decided to go into elementary education” instead of “Hermione really wanted to try to become a professional actor, but we told her we’d kick her out of the house unless she chose a profession we liked better, and given our narrow preferences plus what she majored in in college, that didn’t leave her much choice.”) 😉

My new goal is to be the oldest debut romance author in history!

Not even close, Louisa!!! Because (a) you’re going to be published SOON, that much is obvious, and (b) I know some authors who debuted well into their golden years (never too late to turn author!) so you’d have to wait a good long while to reach that goal! 🙂

Oh, I’d wondered where that had got to! My cat snagged my favorite sweater and caused a tiny black hole…but now the tiny black hole is gone and there’s a great big hole, and I’ve been wondering where the little one had got to…

BTW, I love the oozing metaphor! Cats do the weirdest things… (And I hope your rescue kittens, though small, are healthy!)

M wrote: I think you’re funny, too. And I like to delude myself that that means something since I’m an aspiring comedy writer *g*.

“Mr. Batman, I’d like to express my grave disappointment at the stereotypical negative protrayal of my avian sub-species compared to that of the robin. This is gross discrimination of our non-flying disability.”

Batman’s response: “What are you complaining about? Do you think if I looked as good in a tux as you do, I’d be wearing a bat suit?”

And Judy and Diane, thanks for the kind words! So glad you enjoyed it.

Our own holiday newsletter is more the usual fare: what the kids are up to, editing out some of the stuff that not everyone can handle.

Oh, and to anyone who lost their life’s savings in our cat’s giant Ponzi scheme: we would like to deeply apologize, and let you know that we said “Bad Kitty!” to him in very severe tones.

A kitty collider! I must remember that.

Such a very cool year there! 😉 And I definitely live with a Kitty Collider, most assuredly. 🙂 Me though. . . hmm, I just have my trip to Mars via the Starship Enterprise to mention in my holiday letter. But guess it’s going to get out late since that’s where I’m writing from. Mars, that is. It’ll take a while to get there. Well, unless Santa makes interplanetary trips as well. 😉

Happy to clear up yet another missing black hole mystery!

And thanks, yes, our kittens are very healthy and are now sporting thick winter tuxedos. Very cute.