I’m blessed with ample reading opportunities on my commute and in the bathtub, and like Diane I also like to read before I go to sleep. So it’s quite common for me to have a book on the metro and a book (or two) at home. You’d think I would have a lot more books to talk about than I actually do. I had to go and look at my account on Goodreads to see what I’ve read this year as well as the ones knocking around in my head.

I don’t read a lot of romance for various reasons, but I have to mention a couple: Pam Rosenthal’s wonderful, inventive, subtle, sexy The Edge of Impropriety, a book for and about grown-ups, and not just because of the sex. Honest. Also Julie Ann Long’s terrific The Perils of Pleasure, with its elegant prose and complex characters, though to be honest I’m not sure what it was about, but heck, I had a good time with it. 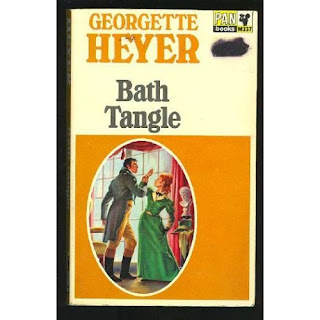 I also have been re-reading Heyer after an absence of, uh, several decades. I talked about Regency Buck a couple of weeks ago. I also read Cousin Kate–meh, zzzz, Gothically silly; Frederica–this must be the book which began the tradition in romance of adorable children and rumbunctious cute dogs, or the other way round if you prefer; The Nonesuch–sorry, all I could think of was Where’s Waldo, but it had a terrific spoiled bimbo anti-heroine; Devil’s Cub–loved it up to where Mary shot him and then was appalled that she turned into his mom (but obviously, with a cross-dressing loony as his real mother, what else would we expect?); A Woman of Quality–interesting because it was one of her later books with a heroine who was bored and grumpy, but no discernible plot; and Bath Tangle, which I gave up on after finding the hundreds of characters Heyer tends to throw at you in the first few chapters interchangeable, although I’m sure I would have noticed Mr. Spock, as the cover suggests.

I read the newest release by one of my very favorite authors, Jude Morgan (he’s a guy!), Symphony, about the love affair between actress Harriet Smithson and Hector Berlioz, with whom he fell in love when he saw her in her signature role as Ophelia (in English) in Paris. She inspired him–I guess that’s the right word, maybe it should be tormented him–to write the Symphonie Fantastique.

I discovered a new Irish writer called Tana French who writes modern Irish police procedurals; gorgeous, stylish, thought-provoking stuff. I lay on the sofa the day after Christmas and read her first book, In The Woods, and did nothing else all day. Blissful. I’d read her second, The Likeness, a few weeks before (I tend to read things out of sequence).

Early last year I had the interesting experience of reading, one after the other, two books on the same theme, modern retellings of the Orpheus legend–Gods Behaving Badly, the first novel by a smart, funny young English writer, Marie Phillips; and the beautiful, painful, eloquent Orpheus Lost by Janette Turner Hospital.

One book that was a major disappointment, but that translated into a wonderful movie, was The Jane Austen Bookclub (how about this one, Cara?). The writer(s) of the screenplay wisely took the author’s copious telling and translated it into dialogue between the characters. A pity–this was a book I wanted to love.

As for nonfiction, I enjoyed Sultry Climes, a book about the Grand Tour, or the STD Tour, as it should really be known. Those enthusiastic young men often brought back more than a few pieces of statuary from their educational travels. I also found a new book about servants, Master and Servant by Caroline Steedman, a thought-provoking interpretation of master-servant relationships in the late 18th-century, based on the case of an elderly clergyman whose female servant became pregnant (it wasn’t his child), and instead of righteously dismissing her, he kept her and the child in the house, doted on them, and provided for them both in his will. 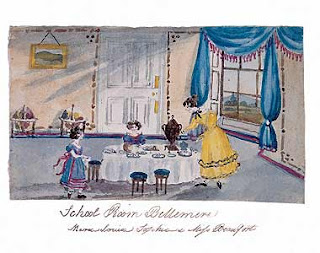 I also discovered A Picture History of the Grenville Family of Rosedale House, a collection of watercolors by a young girl named Mary Yelloly, painted in the 1820s when she was between eight and twelve years of age. She only lived to be twenty-one, which gives a sweet poignancy to her pictures. The paintings were discovered and published only recently. You can read about the book here, and this is one of the paintings.

And here’s something I hope you’ll read and enjoy–I’m doing revisions for it at the moment–coming in May, my next book, A Most Lamentable Comedy, available from amazon.co.uk, and although it’s not listed there yet, this UK site, The Book Depository, offers free shipping worldwide.

What are you reading? Plan to read? What books did you enjoy recently?