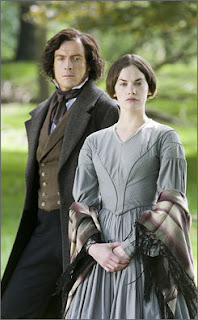 Some intriguing, perhaps disheartening, news from across the water:

This week, the BBC announced it planned to move away from traditional 19th century costume dramas in favor of a grittier look at the period and a new focus on other historical eras.

A senior BBC drama insider said, “There is to be an evolution in the presentation of period dramas, moving away from classic 19th century so-called ‘bonnet’ dramas to looking at other periods of history. This will allow us to look at other times and places in British and world history. The aim is to give drama audiences something new and different to enjoy.”

Traditional costume dramas would not be abandoned altogether, but the BBC will focus on the new type of period drama–an adaptation of the award-winning novel Small Island, about Jamaican immigrants moving to Britain in the 1940s, and Desperate Romantics, about a group of “vagabond painters and poets” set among the “alleys, galleries and flesh houses of 19th century industrial London”, among the first to be broadcast later this year.

While at first blush this might seem like bad news for fans of the costume dramas–and that still might be true–it might be beneficial in the long run to revitalizing the BBC drama and placing “costume dramas” within a wider drama context, thus making the “costume drama” not just a precious oddity, but another subset under the Drama banner.

I do worry sometimes that our (meaning historical fans) tendency to fetishize our history means it doesn’t translate to a broader audience. I like the idea that the BBC is branching out, as we encourage our readers and authors to branch out in era, location and characters.

What do you think?

I politely beg to disagree. Taking the costume out of the drama is like taking the history out of the drama. The culture, the societal more, the language, the food, and yes, the costumes all form part of who they were and what they thought and said. Taking things out of context is the same as writing modern heroes and heroines in period dress.

British theater director Peter Brook does innovative drama. I was interested in seeing what he made of the Indian epic Mahabharata, which is akin to the Icelandic sagas. Brook ruined it completely. He took the glorious, richly spiced tales of valor and honor, kings and battles, and made them beggars grubbing by open fires discussing The Gita. That entire philosophy makes no sense without the relevant context and the events and choices at stake.

I’m a bit confused as to what they mean! I think it could be a very good thing to have adaptations of lesser-known works or stories from eras beyond the 19th century, instead of, say, the 250th version of “Pride and Prejudice” (much as I love P&P!). (that “vagabond artist” one sounds interesting…)

If it is more what Keira says, when classic stories are loosely adapted to fit another setting or period, that can be very hit-or-miss. I liked the movie “The Claim” (“The Mayor of Casterbridge” set in the American West), but an Icelandic saga that isn’t at all doesn’t sound appealing. 🙂

Do you know any more about this new direction, Megan?

From what I understand, they are broadening their range of dramas beyond the 18th and 19th centuries, not taking the costumes out of dramas already set in that period. For example, they did the Diary of Anne Frank and the 39 Steps. They have plans to expand their range of dramas beyond P&P/Little Dorrit et al (in fact, the article cites Little Dorrit as the reason for the change, since it did so poorly in the ratings. Fat Matthew MacFadyen!).

It sounds to me as if we are going to be offered more graphic cruelty and ugliness. These are facts of life, and of literature, but not the only ones. Not really what I want to see. I guess I am getting old and crochety.

Desperate Romantics sounds great. As an art school survivor I still mythologize the whole starving in a garret thing. lol. And I did enjoy the dark-ish City of Vice, most of all the history.

But I still love a good parlor drama. It’s time for a new, good Mansfield Park. And has Middlemarch been done recently? I’d also like to see more Dickens on the screen. Someday I’d also like to purchase the old Poldark series. Ross Poldark (Robin Ellis) was my first screen introduction to swoonworthy men in breeches. 🙂

Janegeorge, amen on the Poldark series. My husband and I discovered it right as the series was ending and thus missed most of it. I, too, would love to own the whole thing.

I really must get Netflix so I can see some of these movies I want to see that are not likely to be on cable. So far it has been cheaper to simply buy the DVD that I want.

“From what I understand, they are broadening their range of dramas beyond the 18th and 19th centuries, not taking the costumes out of dramas already set in that period”

Sounds intriguing! I did like it a few years ago when they did an adaptation of Zadie Smith’s “White Teeth.” But I hope they don’t abandon the 19th century altogether. 🙂

Jane, I agree, it’s time for another “Middlemarch”! The last one was in the ’90s, I think. And a good “Mansfield Park” (I think that one really needs a multi-episode series, like the ’95 P&P, to do anything worthwhile). Maybe “Pickwick Papers”?

I have actually never seen Poldark–I was a little kid when it came on, and even though I was intrigued by what I glimpsed my parents thought it was too racy!! Maybe they have it at Netflix. (I have 73 movies on my list so far, though, and it might take a while to get to it…) I WAS allowed to watch Upstairs, Downstairs, and that’s another one I’d like to revisit.

“From what I understand, they are broadening their range of dramas beyond the 18th and 19th centuries, not taking the costumes out of dramas already set in that period.”

Ah! I get it now. And, er, apologies for going of half-cocked, Megan. 🙂

Ammanda, wished you a happy birthday on your History Hoydens blog yesterday. A belated one here as well.

Hey, I’m the old and crotchety one, but I’m all for innovation, altho I’ve been less than impressed with the latest offerings (e.g. the new Austens).

Thing is, how many of them will get over here? I’d love to see both the productions mentioned (Small Island, which is a fabulous book, and Desperate Romantics, which sounds just my cup of tea).

Well, in the end, there is room for everything, because not everyone looks for the same thing. Gritter, go for it. Not so gritter, go for it. It’ll bring some people in who haven’t watched other costume dramas while other people just watch movies for watching movies, and don’t look for anything in particular. Besides, there will always be another adaption of something Jane, just like there will always be another A Christmas Carol or something else, but they really do need to be spread out a tad. 😉 Besides, there sure are plenty of books out there, written in the past about their present day or written today about the past — always plenty of material to try to use! 🙂

Well, given that my reaction a year or so ago to hearing they were doing new versions of Persuasion and Sense and Sensibility was “why? there already are excellent [film] versions of them, and you’re only going to invite hard-to-satisfy comparisons with Amanda Root and Emma Thompson,” I can see some good here.

(Wow, that was a long sentence!)

There are wonderful versions out there of much of Dickens, and IMHO all Austens but MP, and a whole bunch of different Jane Eyres and Wuthering Heights…

They should do some Heyer! And Aphra Behn. And Fielding. And Fanny Burney. And Louisa May Alcott…

Yes, I know, most of that is 19th century. And if they’re going for grit, it might not do. (And if they’re being exclusively British, then no Alcott anyway.) But new sounds good…. I think….

Most classic novels (with the exception of, say Austen) do have their grittier aspects. If this means less ‘chocolate box’ period drama, all I can say is ‘thank god!’

And LadyDoc, if “graphic cruelty” is a fact of literature, then why shouldn’t it be part of the adaptations?

Hmm. I will have to give this one some thought. I happen to like 18th and 19th century costume dramas. I happen to like novels set in these time periods as well. And I am afraid I am partial to British 18th and 19th century settings. I am open to good productions of other stories, but frankly if they try to make them more commercial and cinematically appealing to the masses I am not sure I will like it. I would love to see some new adaptations of Dickens. I would love to see some great productions of Georgette Heyer and the Poldark series would be great. I guess I can be a bit of a snob when it comes to literature and those books worthy of adaptation to film.

And I have to agree with you, Keira. Mahabharata is a fabulous epic and anyone who would do that to that glorious story should be shot.

I have seen many adaptations of operas that try to take them out of the period for which they were written. So far NONE of them have done the operas justice. I refused a role in an adaptation of Macbeth because the setting was 1950’s America. I am glad I did because the opera flopped and closed in a week.

If one is doing adaptations of novels, one can’t range much beyond the 18th and 19th centuries, because the novel itself (at least in the Western tradition) isn’t that old. Of course, one could adapt modern historical novels set in earlier periods, and that could definitely be cool. I’d like to see an adaptation of Silver Pigs, for instance! 🙂

As for gritty–life in the past wasn’t all balls and pretty costumes, but it wasn’t all dirt and misery either. I hope they strike a balance.