Okay, I know it’s been a week since the Golden Globes, but you knew I would just have to talk about it, right? With no Tilda Swinton this year, I was hoping someone would bring the wackiness and save us from an endless sea of styled-up good taste. And luckily there were plenty of questionable choices, with Renee Zellweger nobly leading the pack in a dress that never should have seen the light of day. With the addition of the crazy hair, she could be heading to an audition to play Bertha Rochester in the attic.

Other than that, there were a few, more minor missteps (IMO, anyway!). Maggie Gylenhaal is too young to look she’s shopping at a boutique for Florida retirees; Drew Barrymore, great dress–bad hair; and Eva Mendes and Blake Lively looked like they had no time to have their gowns properly fitted before running out the door (ditto for Cameron Diaz, but somehow she always manages to look like she mistakenly put her couture gowns in the clothes dryer!)

But it was mostly good! Black, cream, and metallics were big, as was strapless (which I keep hoping is a trend that will fade away, but it never does!). Still, of my top 4 favorites, 3 were strapless, so go figure. Those favorites: Anne Hathaway (I love the midnight-blue color! But she is getting a bit scary-skinny…)

January Jones (another color I love!)

And Freida Pinto from Slumdog Millionaire (my favorite of the night!)

The next big fashion event will be the Inauguration on Tuesday! I can’t wait to see what Michelle Obama wears, and wish so much I could be there in person (though I will be glued to my TV!)

And just to keep this blog somewhat on-topic–on this date in 1775, Richard Brinsley Sheridan’s play The Rivals had its premier! Though it’s possibly his most-performed play these days, it had a somewhat rocky beginning.

The Rivals was Sheridan’s second commercially produced play, written while he was a cash-strapped, 23-year-old newlywed living in Bath with his new wife, the famous singer Elizabeth Linley. It was first performed at Covent Garden, and was roundly booed by the public and the critics for its overly-long length, its bawdiness, and the character of the Irishman Sir Lucius O’Trigger (“a meanly written role played very badly” by the actor Mr. Lee, who was hit in the head by an apple during the performance and stopped to berate the audience. BTW, if it was too long and too bawdy in 1775, it must have been very long and very bawdy indeed!)

Sheridan apologized for any impression that O’Trigger was meant as an insult to Ireland, and set about doing extensive revisions in 11 days. On January 28, it re-opened with a new actor and a shorter length, and went on to great popularity. It became a favorite of the royal family, with 5 command performances in 10 years, and was also ironically a favorite of George Washington. 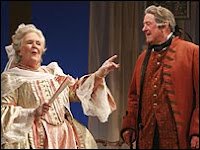 The story is set in Bath, and centers around the young lovers Lydia Languish and Captain Jack Absolute. Lydia, a very Catherine Morland sort of girl who reads lots of novels, wants a Romantic Affair. So, Jack pretends to be a poor ensign, not a wealthy officer from a good family (who, ironically, has been betrothed to Lydia by his father, all unknowing!). Lydia loves the idea of eloping with a poor soldier behind the back of her guardian, the famous Mrs. Malaprop (“He was the very pineapple of fashion!”)

Lydia also has 2 other suitors, Bob Acres (a buffoonish country squire) and the argumentative Irishman O’Trigger. The plot is full of misunderstandings, duels, acceptances, quarrels, etc, until all ends well.

I recently read a very interesting novel called Jack Absolute by C.C. Humphrys, which re-tells the story in a much more dramatic fashion. A good source for this post was Linda Kelly’s Richard Brinsley Sheridan, A Life (1997). And a good source for Golden Globes pics is the Entertainment Weekly website!

Who were your favorites at the Golden Globes? Seen any good productions of The Rivals?

And you can see an excerpt of High Seas Stowaway this week at Unusual Historicals...

Oh, my. What was Renee thinking?

Oh, I’m going to have to check out Jack Absolute! But first, I have a humongous pile of Rita books!

Yeah, that Renee dress was ghastly. I thought Drew B. looked tipsy for most of the evening. Gotta say nothing wowed me.

And I was in a production of the Rivals! Our production had background characters with umbrellas spelling out “The Rivals;” I was the letter “V,” brought in at the last minute to replace someone.

Alas, I didn’t see the Golden Globes, but I’m rectifying that tonight when it will be rebroadcast.

But I did see The Rivals a couple of years ago at the Folger Theater in Washington DC, which is a small, theater that looks very “historic” on the inside. It was a delight!

Megan, there were no umbrellas in the Folger production, but I’m certain you were the very best V there could have been!

“but I’m certain you were the very best V there could have been!”

And one thing I always enjoy about the Golden Globes is the fact that there is drinking going on. As the evening goes on, the speeches get loopier and loopier! I especially loved it this year when the presenters had to keep “shooshing” the audience.

And speaking of Ritas–I must read mine, too. But I think we should have tables with bottles of champagne on them at the next ceremony, and see what happens 🙂

I wish I had seen the awards ceremony itself, instead of just the takedown at gofugyourself.

To add more relevance, Nelson’s 250th anniversary was on Thursday.

Now, let’s talk about the GG clothes and how awful Zelleweger’s outfit is.

Our production had background characters with umbrellas spelling out “The Rivals;”

I think Renee was living her Bridget Jones triumph (remember what Daniel Cleaver said about her see-through top?).

What were they thinking…

I did see the Golden Globes and I LOVED Kate Winslett – classy and elegant. And I love that Anne Hathaway gown too.

Renee, Renee, Renee. Does your Mama know you wore that gown? Good heavens. I don’t know who is more to blame – the designer for designing it or her for wearing it.

I haven’t seen The Rivals but I would love to see it. Sounds like you saw it in a wonderful setting O Divine One.

Am adding the books to my teetering tower of TBRs!

“Am adding the books to my teetering tower of TBRs!”

LOL! Blogs are so good for that. It seems the Jack Absolute books are a series, though I’ve only read the first one. And I love that Sheridan bio for all the great background on theater, politics, fashion, all sorts of things.

And I love that Sheridan bio for all the great background on theater, politics, fashion, all sorts of things.

Oh….now I have to add to my TBR pile!

I love The Rivals. I think if I’d seen the long version, I wouldn’t have minded!

BTW, my favorite Globe dress was Drew Barrymore’s, and I actually liked her hair, too!

I wonder if some of them really know what they look like?

Isn’t there a movie based on a graphic novel about a young actress who is cast as the letter “V,” but thinks she should have had a larger part (like the letter “R” perhaps)? She vows that she will have her revenge. I think it was called “V for Vendetta.”