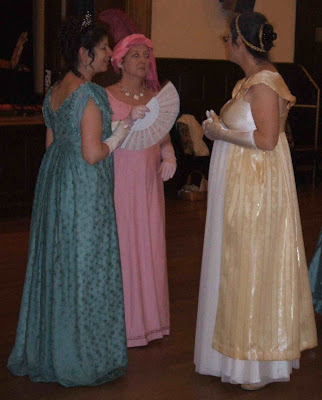 First off, I would like to welcome any newcomers or visitors to the blog! Risky Regencies is a light-hearted community of Regency writers and Regency fans, and we provide great discussions on everything from the merits of the 1995 miniseries of Pride and Prejudice to rereading Georgette Heyer.

Now, to today’s subject: the 2009 Jane Austen Evening, which I attended this past Saturday!

(In fact, I enjoyed it so very much, that I shall be giving away two Regency-themed prizes to lucky commenters today! Just comment on this post by Wednesday night, and you’ll be entered to win a DVD of the Rintoul/Garvie version of Pride and Prejudice, or the guidebook to the Bath Museum of Costume, or a book on Sarah Siddons, or another prize of your choice!) 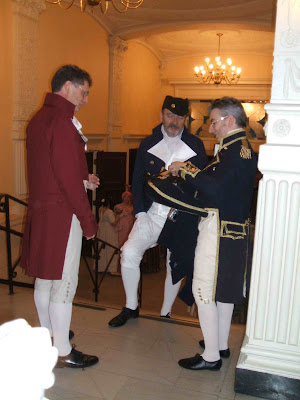 I have now attended something like six Jane Austen Evenings, and it seems to me they get better every year.

As always, it was held in a gorgeous location (as these photos attest!)

First, we had a Regency tea, with as much scrumptious period food as one could eat, plus a variety of teas.

My favorite food this year was the sweet rosemary shortbread — I went back for more.

I think every year, the costumes are better, and the dancers more experienced.

And this year, it seemed to me that the costumes weren’t only fabulous, but that nearly everyone was in some sort of costume. 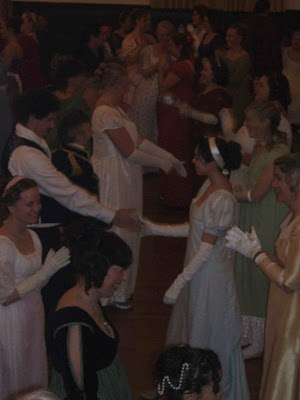 There were moments when one could truly picture oneself back in Jane Austen’s time!

(Though the cameras, I suppose, were a tiny bit anachronistic.) ­¤śē

Then again, with so many amazing costumes, who could blame those of us who took photos?

(In fact, I took so many, that I had to do two blog posts today to hold them all…)

I even brought a camcorder this time — though I’ve yet to see how my taping turned out!

(If it turned out well, then I’m going to upload some of it to youtube, just as Jane Austen would have done herself.) 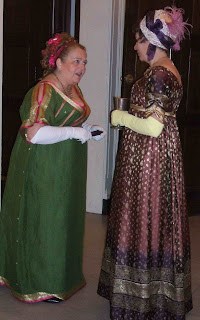 Then, after all the splendid tea, we danced all night.

(My feet were killing me by the end!)

So: if you want to comment on this post, feel free to answer any or all of the following questions:

Did you attend the Jane Austen Evening? What did you think? Which was your favorite part? (Your favorite food, or dance, or costume?)

If you didn’t attend it, which part sounds the most alluring?

Which is your favorite photo?

Have you ever attended a similar event?

Cara
Cara King, author of MY LADY GAMESTER and dancer of Maggots 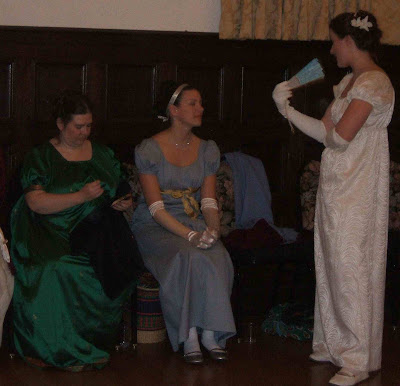 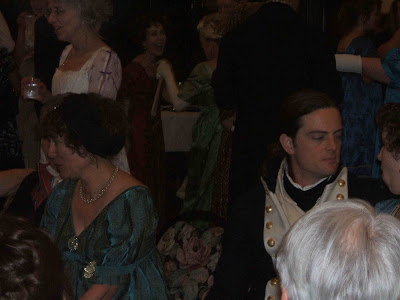 Elena Greene grew up reading anything she could lay her hands on, including her mother's Georgette Heyer novels. She also enjoyed writing but decided to pursue a more practical career in software engineering. Fate intervened when she was sent on a three year international assignment to England, where she was inspired to start writing romances set in the Regency. Her books have won the National Readers' Choice Award, the Desert Rose Golden Quill and the Colorado Romance Writers' Award of Excellence. Her Super Regency, LADY DEARING'S MASQUERADE, won RT Book Club's award for Best Regency Romance of 2005 and made the Kindle Top 100 list in 2011. When not writing, Elena enjoys swimming, cooking, meditation, playing the piano, volunteer work and craft projects. She lives in upstate New York with her two daughters and more yarn, wire and beads than she would like to admit.
View all posts by Elena Greene →
This entry was posted in Uncategorized and tagged English country dance, Jane Austen Evening. Bookmark the permalink.