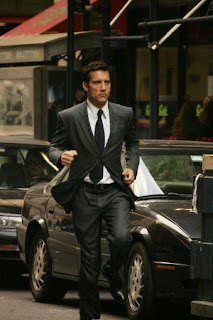 We are featuring an interview with Carolyn Jewel soon, but due to some technical difficulties [curse you, Yahoo!], we won’t be posting the interview today.

[Edited to add: Look for the interview NEXT Friday]

So, sorry for the no-post post, but let’s just start some chatter, shall we?

Do you Twitter? Amanda and I do. If you do, come find us!

I am about to start watching Cranford; is it awesome, or not so much?

Are you watching the Grammys this Sunday? If so, keep an eye out for my gal Adele, who’s nominated, and who’ll be performing.

Anything else on your mind this frigid (in New York, at least) Friday?

That’s very clever, tossing in a pic of Clive Owen to appease the masses when the blog fairies have handed you an unexpected posting void.

I HATED ‘Closer’ from the first five minutes, but forced my way on to the end, waiting for all cause of critical praise to show itself. Never happened.

Though I love Clive, I’m not sure of his being able to pull it off. Heck, I’m not sure of Julia Roberts being able to pull it off anymore. I think I’m too heavily influenced by how bad a movie that one with Jennifer Lopez and Ralph Fiennes was. Though to be fair he might have succeeded if it was a better film. And it really would be nice to see what Clive looks like when he smiles. Don’t think I’ve ever seen it. He has that photogenic perma-brood going on.

I agree, how clever to have his picture on the side of the comment about technical difficults. Softened the message tremendously.

I saw the preview for the Clive Owen/Julia Roberts comedy and it has possibilities. Hopefully all the funny/romantic bits weren’t just the preview scenes. And, yes, he is cute when he smiles 🙂

I remember watching Closer but that’s it. Can’t even remember the plot so it must have been one of those we thought would be interesting from a preview or someone’s comments. From the comments I’ve seen since then, not one I’d watch again.

I really enjoy it when actors are cast against type and I think Clive has the chops to pull off a romantic comedy. In that vein, I’d like to see Hugh Grant in a grit-jawed thriller. I bet he’d rise to the occasion, grateful not to be playing another insipid self-obsessed character. (Don’t get me wrong, they’re great characters, but my guess is he’s bored!)

Julia Roberts is a problem. I’ve never been able to enjoy her roles because she erects a giant wall about herself for protection. She never lets it down. It’s right there in her eyes and it interferes greatly with her ability to be vulnerable while acting. It’s there even in Brockovich, although it kinda worked there because Erin used the clothes and boobs as a means to keep people at a distance as well.I would have LOVED Conspiracy Theory if it had cast Clive Owen instead of Mel and Jennifer Connelly or Ashley Judd or…

Hey, keeping with my casting against type theory, let’s cast Cate Blanchett opposite Clive in the romantic comedy. Zing!

Okay, enough blathering from me. I happily await Carolyn!

Well, I don’t watch the Grammies, never saw a Julia Roberts movie. . . never saw Closer, don’t know much about Clive. . . but I did finally see Clueless today! 🙂 It sure is an enjoyable version of Emma! And that Josh/Mr Knightley was kind of cute too. 🙂

Love Clive. Can’t imagine him with Julia Roberts, who is not one of my favorites.
Now Clive and Cate Blanchette? Good casting, janegeorge.

I agree about Twitter–I just joined last week, and it is a great way to waste time online. 🙂

Clive in a romantic comedy–I think he could be great! Don’t like Julia Roberts, though.

I thought Closer was brilliant, and it almost, almost squeezed a performance out of Julia Roberts (I’m inclined to pretty much agree with Jane G about her).

Loved the picture of Clive Owen doing an Irish jig, Megan–I didn’t know he could dance too.

Uh-oh, was I harsh?
Must go eat some conversation hearts and sweeten up.

I think Clive Owen would be fine in a rom com, but I’m not sure his vibe and timing will mesh with those of Julia Roberts. We’ll see…

Cranford is grand…if you want more detailed opinions after you watch it, be sure to check out our Risky discussion on Cranford!

I actually ended up really liking Closer despite its flaws. I thought Clive did an amazing job, showing his acting skills.

And Natalie Portman was pretty great, too. Julia, no. Jude Law, lovely to look at, for sure.

thanks for reminding me about the Cranford discush, Cara, I thought you had done it at some point, but avoided it so as not to spoil. I’ll look up the post when I’m finished watching.

Clive Owen, not so much. Er, not in a rom or rom-com with anyone.

Ah, I’ve been wondering where Carolyn got up to.

I really like Cranford. I haven’t finished it yet. So…Megan, how come tonight it’s not ole Rupert but two ole ladies you’re snuggling with, given that S is off to watch his team get kicked, er, win?

Keira, it’s ’cause I finished those two epis already. And just mailed them off today, so no MI-5 for me. Wah.

My CP watched Cranford and loved it, so I see a viewing of it in my future. I LOVE Clive Owen, but I’m not real sure about him with Julia Roberts. I think her performances are a bit uneven and sometimes she just doesn’t ring true – that’s the only way I know to put it.

I think I’d watch Clive Owen read a grocery list but can he pull of romantic comedy? with Julia Roberts? The jury’s out for me on that.

I have never seen Cranford but it looks great.

I don’t follow the Grammies or any of those award shows except to see what folks are wearing. Shallow but true.

Julia Roberts is a problem. I’ve never been able to enjoy her roles because she erects a giant wall about herself for protection. She never lets it down. It’s right there in her eyes and it interferes greatly with her ability to be vulnerable while acting.

Hmm. And yet, Notting Hill is one of my favorite romantic comedies.

Re Todd’s comment: Interesting!! Notting Hill is the one rom-com that every guy I’ve met loves. (I enjoyed it too, but I was a bigger fan of 4 weddings.)

Anyone else here seen Clive’s “Second Sight”? It’s a British police series; C’s a detective who’s losing his sight. Terrific stuff, as I recall, although I saw it years ago.

I saw some of Second Sight, Greta; I liked it, and want to see more, Netflix permitting.

I didn’t like Chancer, Clive was too much of a gawky cad. Plus it was slower than treacle.

While not a “rom com” (WHO coined that darn term?) perhaps the most romantic thing a Clive Owen character did was at the end of “Children of Men”. It surpasses (slightly) the chemistry he has with Monica Belluci in the sleeper hit “Shoot ‘Em Up” (where he saves the wee baby from the evil clutches of Paul Giamati).

“Closer” had four self-absorbed characters which made it impossible for any of them to be close to anything (hence the ironic title). IMHO, Julia needs to take acting lessons from her criminally under-rated brother Eric. The gravitas and soulfulness he displayed in the latest Batman movie clearly was a winner.

Btw, Twitter is 140 words of posting goodness. It’s an excellent way to connect with your fans (and other writers). Ultimately it’s a self-marketing tool but don’t let that notion spoil your fun! 🙂

Hm, I love Clive above all things, but I’m skeptical about romantic comedy. He’s too edgy. And Julia Roberts is whatever.

Closer was one of those movies I would classify as “good”, but not “fun”. Too harrowing ever to watch again.

But he was pretty electric with Natalie Portman in that movie. And he made a bad thriller with Jennifer Aniston once, but they had a ton of chemistry. Sometimes it’s there and sometimes it isn’t.

Anonymous, I loved Children of Men, and yes, it was swoony romantic.

And YES, Abby, he needs to choose his scripts more wisely! Derailed was a POC.