Unless you’ve been living in an obscure cave you’ll know that today is the 200th anniversary of the birth of President Lincoln. I wanted to tell you about a touching memorial to him in Manchester, UK.

This statue bears the inscription:

This statue commemorates the support that the working people of Manchester gave in the fight for the abolition of slavery during the American Civil War. By supporting the Union under President Lincoln at a time when there was an economic blockade of the southern states the Lancashire cotton workers were denied access to raw cotton which caused considerable unemployment throughout the cotton industry… 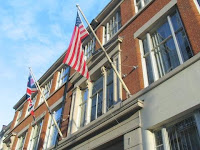 Technically, Britain was neutral during the Civil War, but Liverpool, the port where the south’s cotton was unloaded, was a wholehearted supporter of the confederacy. The confederacy headquarters were in Rumford Place, where a US flag still flies.

In an 1863 letter to the “working men of Manchester,” Lincoln termed this action “an instance of sublime Christian heroism which has not been surpassed in any age.”

The other big birthday today is that of Charles Darwin, born in the same year. His mother was a member of the Wedgwood family and the novelist Elizabeth Gaskell was an obscure cousin. Her last book, and one my favorites, Wives and Daughters, was published around the same time as The Origin of Species.

It’s possible that her portrayal of Roger Hamley, the nature-loving hero of the book, is based on her memories of Darwin as a young man:

He had gone about twenty yards on the small wood-path at right angles to the terrace, when, looking among the grass and wild plants under the trees, he spied out one which was rare, one which he had been long wishing to find in flower, and saw it at last, with those bright keen eyes of his. Down went his net, skilfully twisted so as to retain its contents, while it lay amid the herbage, and he himself went with light and well-planted footsteps in search of the treasure. He was so great a lover of nature that, without any thought, but habitually, he always avoided treading unnecessarily on any plant; who knew what long-sought growth or insect might develop itself in what now appeared but insignificant?

For Darwin Day celebrations, check out this site.

There are many Lincoln celebrations taking place across the US. Here’s the link to the Library of Congress’s With Malice Toward None: The Abraham Lincoln Bicentennial Exhibition.

What are you doing today?

gosh, I must be living in a cave–doing revisions–I totally forgot today was Lincoln’s Birthday.

I didn’t know that about the Manchester workers. How heroic of them.

I can just hear Darwin and Elizabeth Gaskell chatting at a family dinner.
“So how’s your book going?”
“In its second printing.”
“It is? How…nice for you.”
“Yours?”
“It is selling well to its target audience.”
“Did it make any of the lists?”
(pause)”no.”

What an absolutely clever post!!!! Janet, I’m in awe. All I knew was that today was Lincoln’s and Darwin’s birthdays, nothing else. So thanks for the education.

I wrote about Darwin at my place, too. And just saw Wives and Daughters, and loved Roger. Science geeks rock!

thanks for wrapping it all up for us, that was cool.

I loved that BBC version of Wives and Daughters, Megan. It was so well done and had a great cast. And the clothes, OMG the clothes.
(My next deep thoughts for the day. And Keira, you don’t want to be me because today I had an ingrown toenail removed, yuk. The doctor said I could take it home and I did think, for a very short time, that I might take it home, dip it in chocolate, and offer it to my husband for St. Valentine’s Day. But I didn’t. For a start, he’s not supposed to eat chocolate.)

Yeah, except Roger was a total dopey GUY falling for the obvious stepsister first. 🙂

Well, I have ingrown toenails in the big toe but I’m too chicken to have them taken out. So, I, too, want to be when I grow up. (And since my husband is sitting next to me laughing about the chocolate-dipped toenail…)

BTW, this year is also the 150th anniversary of the publication of Darwin’s Origin of Species and thus also Wives and Daughters.

Clever post, Janet! And I loved the dialogue O Divine One!

Hmm. Today, I am trying very hard NOT to kill some of my fellow Americans. Is that a patriotic celebration of Lincoln’s birthday or what? Never get between harried mothers and cupcakes the day before the classroom parties. Teachers all over the county will be cursing my bakery tomorrow. Chocolate cupcakes with lots of icing. That’s exactly what a bunch of schoolkids need before lunch!

I haven’t seen Wives and Daughters. Need to add it to my list. I have a great old copy of Darwin’s Origin of Species. Really good read, that one.

This weekend I kind of got into the spirit of Lincoln’s birthday. I watched (or rather rewatched) the films Glory, Amistad and Amazing Grace. I was just in the mood for that sort of uplifting reminder of where we were, where we are and where we can go if we have courage and faith in each other. A nice reminder in tough times.

And Darwin’s book has never been out of print, so that’s doing pretty well, publishing-wise. 🙂