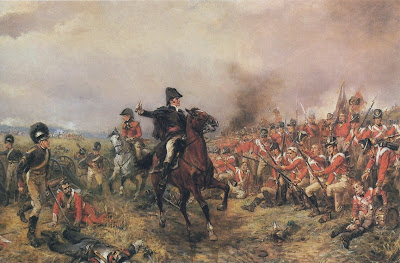 Last night as I was plugging along on my revisions, I discovered AN ERROR, one I could not ignore, even though maybe only about two readers would recognize the error.

From the beginning of this book, my villain was a general in the British army and his son, the mini-villain, was his cowardly aide de camp. I thought I was so lucky because I put him in charge of a regiment, the Royal Scots (1st Regiment of Foot), while my hero was in the East Essex (44th Regiment) and they both fought at the battles I needed them to, including Waterloo.

A couple of days ago I also discovered that these two regiments fought at Quatre Bras as well as Waterloo AND they were in the same brigade. This fit perfectly with some changes I’d decided to make.

Then last night I noticed something. The real commanders of the regiments were all colonels. After about two hours of searching the internet and my dozens of Napoleonic War books, I verified that, indeed, colonels commanded regiments, not generals, and colonels do not have aids de camp. (I also phoned my friend Eugene Ossa who knew all this stuff off the top of his head)

So I had to revamp a few things and go through the whole manuscript to make sure I fixed everything.

Needless to say, I didn’t get much sleep last night….

Of course, each regiment had surgeons, bandsmen, clergy, a paymaster, but I didn’t need to know that to solve my problem.

I sent my manuscript on time, then got permission to go through it one more time, just to polish the prose (and hope that I don’t discover another ERROR)

But first I’m going to sleep…..

So…has this ever happened to you?
Do you understand the British Army in 1815???

Diane Gaston is the RITA award-winning author of Historical Romance for Harlequin Historical and Mills and Boon, with books that feature the darker side of the Regency. Formerly a mental health social worker, she is happiest now when deep in the psyches of soldiers, rakes and women who donâ€™t always act like ladies.
View all posts by diane →
This entry was posted in Uncategorized and tagged British Army, Quartre Bras, revisions, Waterloo. Bookmark the permalink.