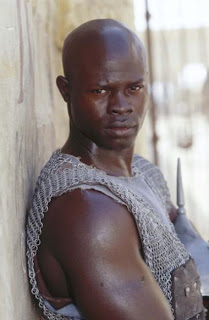 Is everybody in the world sick with the flu? Or does it only seem like that?

Anyhoo, when our house hasn’t been running through tissues like a bunch of softies watching Terms of Endearment, I’ve been revising my super-racy, not-quite-erotic novella. It takes place in Paris in 1831, and its hero is a Free Person of Color.

The first inspiration for him was Barbara Hambly‘s Benjamin January, a free man of color in New Orleans around the same era. January spent many years in Paris, enjoying freedoms unknown to persons of color in America. But in figuring out how my guy ended up in France, I had to research how persons of color became freed in the slave era. Like January, Fortune–my hero–had been freed by his owner. Unlike January, however, he was freed only at his owner’s death, a former placee [a woman of color who entered into a legal contract with a white man to be his official mistress] who had a sizeable fortune and owned property in New Orleans.

[I originally wanted my hero’s former owner to be Haitian, but it was a more direct route from New Orleans to Paris; but do check out the history of the first successful slave revolt in Haiti here. Really cool.]

There are a few examples of such a woman, including Eulalie de Mandeville, whose white lover married her at his deathbed and left her his entire fortune, which was upheld even though his white relatives contested the will. Another such example is Rosette Rochon, who took what her various white lovers bestowed upon her and speculated in real estate, entered in money-lending and bought and sold mortgages, among other things. She died at age 96, still illiterate, with a fortune valued at about a million dollars in current valuation.

It’s been interesting, as a white twentieth century woman, to navigate the delicate balance of race relations in France in the nineteenth century. I have to admit, moreover, that my first draft didn’t take that into account, so I am revising with an eye to that.

Hambly describes January’s constant concern that he be taken and sold as a slave, despite being freed. He carries one set of papers at all times showing his status, but keeps another set in a secure spot in case the first set doesn’t suffice. My hero is equally uncertain as to how he will be treated, and he carries that awareness of race with him, no matter how much money is in his pocket.

One of my favorite themes, both in reading and in writing, is the outsider, and Fortune is the epitome of that: An educated, dark person of color living in a white world with resources but without ever quite belonging.

Do you like reading outsider stories? Do you have favorite outsider heroes or heroines? And would you think this kind of story too risky for a romance?

I don’t know that an outsider story is risky for a romance, but the life of any true outsider is never easy.

I can imagine a free person of color gaining the acceptance and respect of a circle of friends and acquaintances, yet always having to establish his/her worth whenever meeting someone new. And while it’s true that the same could be said for any hero/heroine introduced to a new circle, a free person of color at a time when slavery was the norm would have severe added handicaps.

It sounds like an interesting project, and, of course, there’s the fun of research.

Did you find any useful books/articles?

I would love to know how you went about researching the book. I read somewhere about a fencing instructor in 18th century Paris who was a free person of color, called Chevalier something. It was also the fashion for the sons of Creole men and placees to be educated in Paris as well. I once directed a play called The Brown Overcoat by a playwright named Victor Sejour who was a free person of color.

Megan, I love this idea!

One of the first acts of the revolutionary government in France was to free slaves; Napoleon re-enslaved them again, so I think there would have been a tremendous sense of betrayal, even a generation later.

In England the notorious London mob aided and hid escaped slaves. There was a population of about 10,000 people of color at the end of the 18c in London, most of whom were men, and whose legal status was ambiguous. There was a brief fashion in England of having a black slave as a page and you really wonder what would have happened to those boys when they grew up and were no longer cute.

Sorry about the flu, Megan.

My reject pile has a partial with a former page coming into puberty well, that was an unfinished sentence! I was very happy writing in his POV. The book was mainly about the servants and their relationship with Upstairs, tho I could never figure out what would actually happen.

Honestly, the way I tend to do research is through immersion, so I read all of the Hambly January books and felt comfortable enough to venture into another area of fiction. Then, when I had to figure out exactly where my guy came from, I started trotting through Wikipedia.

EKM, I’ve heard about that Chevalier, too. Also another one who was a transvestite, although he was white.

And Janet, I remember reading some books featuring young black pages–yes, I do wonder what happened to them after! Not like they could go get another job so easily.

I think the outsider hero works great in romance. There’s so much angst and conflict and so much of a journey for him!

Outsiders who are sociopathic probably wouldn’t work, but outside of that….

So much to learn; so little time…

I adore reading about outsiders in romance, whether it’s a man or a woman. I remember reading a Karen Robard’s novel where the hero turned out to be part black, and one of my favorite historical romances was about a creole planter and his placee who moved to France so that they could get married.

Nothing intelligent to contribute here other than: Djimon Hounsou–ooh, hawt!!

Lisa Kleypas in her Creole historicals deals with race and color, free and enslaved.

A couple people I know have tried writing non-white Carribbean heroes, but have been largely unsuccessful in having editors even request partials. “Too risky,” was the response.

I really like the way you think. I mean I really like it! I do know that it is has been hard for some of my fellow aspiring writers to write with these types of heroes and heroines but I don’t think it’s impossible.

How could I have forgotten Lisa Kleypas’ Caribbean stories! Didn’t Catherine Coulter (did I get that right?) also write a couple of mixed heritage heroes and heroines?

Anne Rice’s ‘Feast of All Saints’ also featured the free persons of color in New Orleans.

I’ll have to hunt down those Kleypas books you guys mention.

And of course, I can’t forget that Amanda wrote a biracial heroine in an anthology, the title of which I am totally forgetting. But I loved.

Keira, I am hoping that the fact that it is a) a novella and b) super-sexy will overcome any concerns about its being too far out of the main.

And Santa, thanks! I’ve read a lot of Anne Rice, before she got the crazy, and she really evoked that era well, too.

Well, dang, Megan! I’ve been working off and on with a similar story but set in London, rather than Paris.

I was in DC, visiting the portrait gallery with Janet Mullany when inspiration struck. Now I just need the time to write the damn thing.

“I can’t forget that Amanda wrote a biracial heroine in an anthology, the title of which I am totally forgetting.”

Upon A Midnight Clear–the heroine was the daughter of Jamaicans (and it was re-released last fall!) I loved her so much, though there wasn’t the word count to play with it as much as I would have liked. 🙂

And I second the rec of the Hambly books–I love that series so much. I think it’s ended now, though, right? Pooh.

And I am also suffering a sinus infection. Blech.

Excellent Megan! I adored Anne Rice before she got the crazies, too! Ah, how could I have forgotten The Witching Hour! That had the potential of being a great series until she decided Lestat had to be in every book!

In case anyone is interested in the two Chevaliers mentioned, I thought I’d add their names:

And the Chevalier d’Eon was the 18th century French cross-dresser…people for a long time honestly didn’t know if he was a man or a woman. He was also a spy.

(Anyway, I thought the names would help in case anyone wanted to look for further info…)

I want to read this story! I’ve been toying with a plot set in 1830s Barbados featuring a white planter and the woman he owns, but I’m chicken! It’s a heavy subject for a romance, but it won’t let me alone. *g*

Jennifer Blake’s Master at Arms series has a reocurring character patterned, I believe, after the Chevalier de Saint-Georges. She discussed wanting to write his story, but since the series is ending next year, I don’t think it will happen. 🙁

I need to look for Amanda’s novella now, and the Kleypas books!

Ooh, I want to read this story. I have a penchant for characters who are outsiders in one way or another who can finding love and community, that’s most gratifying for me to read and write.

And yes, My BF had a nasty flu, it’s everywhere. He had it, Jacob had it, Marianne had it (I think maybe I’m Flu-Bug Mary) Watch out.