Heroine of the Battle of Salamanca by Delle Jacobs

Good morning, everyone! It’s always such a delight to be a Risky for a Day.

You might know I’ve started my own blog called “In Search of Heroes,” and I’m having alot of fun with it- the way I look at it, everything related to reading and writing romance is the search for the hero. Today reinforces my theory because today, my hero is a woman, Susanna Dalton Dalbiac, the Heroine of the Battle of Salamanca..

Susanna was born in 1787 and married James Charles Dalbiac, who had joined the 4th Light Dragoons as a cornet in 1797 and made them his lifelong career. Charles joined the Portugal campaign in April 1809, and when he fell ill of a fever, Susanna rushed to his side to nurse him,
and thereafter stayed with him.

According to William Napier, “This gentle lady has followed her husband through two whole campaigns in the Spanish Peninsula. She has been by his side in every danger- in every vicissitude she has borne her loving share. In all the thrilling movements of the past few days she has ridden close to her husband’s regiment. Again and again has he urged her to seek security but as often she has refused to leave him.”

On the night before the Battle of Salamanca, Susanna and her husband slept beneath the stars, she wrapped in his greatcoat, when a thunderstorm struck, stampeding the terrified cavalry horses. Charles snatched up his wife to safety atop some artillery pieces, and he climbed up after her, but there were many of the dragoons who were trampled, Thirty horses were still missing the next morning. 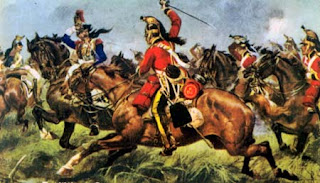 Despite such an inauspicious start to the day, Wellington found the advantage he needed in the audacious mistake of his counterpart, Marmont, who thought he was seizing an opportunity to outflank the British-Portuguese Army. But he didn’t know Wellington had judiciously hidden Pakenham’s 3rd Division behind the hill, at an angle to the main force, the very place where Marmont’s troops hurried to attack and turn the British flank. As the French over-extended themselves to trap their foe, Pakenham lunged, cutting off a good part of the French forces. Then
Le Marchant’s Heavy Cavalry came at the enemy in a wild and brutal assault that left the French in ruins and their commander, Thomieres, dead..

The 4th Light Dragoons were a part of Le Marchant’s assault, and Susanna rode after them. As described by Major Elliott, “The cannon shot of the enemy flew past her, the French shells burst all around. Leaden bullets pierced her riding habit in many places.. . The cavalry trumpets rang
out an order, the horses broke into a rapid trot, she drew aside her horse, for she knew that a desperate charge was at that moment to be delivered.”

As the cavalry rode into their own cloud of dust, Susanna spotted a color guard with an arm wound gushing blood, and she bandaged it and gave him wine from her flask. From then on, she raced about from one wounded man to another offering aid, and when her wine was gone, she
bent to a stream to refill her flask, bullets flying all around her and splashing water in her face.

It was many hours later, hunting through the thousands of dead, dying and wounded, not knowing if he lived or had died, before she finally caught up with her husband again, and they embraced on the battlefield. “As the regiment was dismissed from its ranks, all its remaining men gathered around the brave lady with demonstrations of deepest admiration and respect.”

Susanna stayed with her husband until they returned to England, and never returned to the campaign again. In 1814, she gave birth to her daughter, Susanna Stephania Dalbiac, who later married the Scottish Duke of Roxburgh. Many years later, Charles spoke of his wife, “Of this
incomparable wife I will only add that a mind of the most refined cast, and with the frame of body alas too delicate she was, when in the field, a stranger to personal fear.” 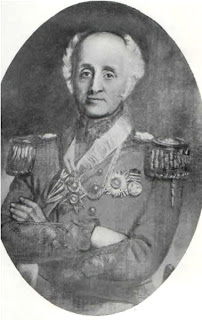 In looking for pictures of Susanna, I could find nothing at all. Then I came upon a family genealogy site which showed a picture of her husband James Charles Dalbiac, in his later years, still in uniform, and one of her daughter. But there’s something wrong with that photo. Most of you can probably spot it quickly. The young woman in the photo- probably a photo of a painting- is wearing a dress of the very late 18th or very early 19th Century, when the elder Susanna would have been a young woman. The younger Susanna was not born when this style was in
fashion. So I think the similarity of names fooled someone, and likely the younger Susanna’s husband was better known.

There’s another reason I believe this photo is of Susanna Dalton Dalbiac. When I look at her as a young woman, and at Charles as an older man, there’s just something in their faces. These two were married to each other, don’t you agree?
—
Delle Jacobs
SINS OF THE HEART
ADVENTURE as rich as gold * LOVE as delicious as chocolate
www.dellejacobs.com

Delle, what a very cool post! I’ve never heard that story. What a remarkable woman!

Of course, I’m sure if I rode off to war, my own courageous wife would follow me, in spite of shot and shell. But she probably wouldn’t have any wine for the wounded men, ’cause it gives her headaches. 🙁

As it is, she has followed me to many a harrowing physics conference–but there the greatest danger is being cornered into conversation by a physicist. Painful, at times, but rarely fatal.

What a great model for a heroine, Delle!
Thanks for guest blogging with us.

Delle, what a wonderful story! Thanks so much for visiting here today and sharing it with us. I like reading “general history” books, but what I really love are these individual stories that bring an event alive.

Todd! A physics conference? It must be real love for her to follow you there. :))

Thanks, Todd, Diane and Amanda.

Todd, I think I agree with Amanda- I think I recall you attending a few Beau Monde conferences with your wife, though, and that might be comparable. I don’t want to even think about my hubby going to RWA conferences with me, although I go to gun shows and antique watch shows with him sometimes.

Amanda, I’m like you, I love reading those unique anecdotes that make history come alive.

Last night I received an email from the owner of the two photographs, who is on holiday. He promised to send me more photos of Susanna and her husband after he returns. I hope I can learn more about this remarkable family, and do a longer biographical piece on them.

What a great story. Thanks for posting your research.

Remarkable story Delle! Thanks for letting your fellow Beau Monde members know about your visit to the Ricky Regencies blog today. I was not only inspired by your story, but also by your notion that reading and writing romances revolve around the search for the hero whether it be man or woman,

About the portrait of Susanna (or not)–to me it looks like a Victorian artist’s impression of what a woman in late 18c dress would have looked like. So maybe it’s an artist’s homage to her.

Amanda wrote: A physics conference? It must be real love for her to follow you there. 🙂

Well, seeing as the last one I attended was in Nice, I’m not sure it’s a sacrifice! 🙂

And yes, Delle, that was Todd at a few RWA & Beau Monde conferences a while back…and I’m sure he regrets missing the most recent one, where the gentleman had all the period firearms to display!

Janet, I agree with you on the picture. IMHO the line looks wrong for the 18th century (any decade) but does look like a Victorian idea of an 18th century gown…

Oh well, Cara, if it was Nice, then you don’t get extra points for bravery!

On the dress- yes, I can see it might be a Victorian re-interpretation of 18th century dress. To me, though, it seems sort of provincial. Reminds me of American Colonial a bit. The shawl-like fichu I’ve seen in some paintings, right at 1800. But the skirt line was different, and the waistline higher. Susanna was born and raised in Yorkshire, but I don’t know where.

What I find fascinating are the perfect fold creases in the skirt. Makes me think of a clothes press. I’ve always wondered how dresses made of fabrics known to wrinkle could possibly be stored flat. This looks like a tablecloth ironed then folded and stored away, and brought out only at holidays.

Thank you Delle, for such an interesting post. Like Amanda, I love stories of individual courage, and a daring to go against the grain, especially in women. Imagine what a strong she was! A perfect heroine!

Thank you, Delle, for such a wonderful and inspiring post! I had never heard this story. Susanna is my kind of gal. Her deeds prove that bravery is not the absence of fear, but action in spite of that fear. And what a wonderful tribute from her husband.

I love those stories that come back to remind us that history is made by ordinary people doing extraordinary things. When I taught high school history I tried very hard to show my students the humanity of historical figures. Their favorites were John and Abigail Adams because I spent a lot of time reading their letters to each other out loud to my classes. John Adams was pronounced a “Mac Daddy” by my female students because he signed his letters to his wife “I am now as I ever was and ever shall be – yours.” I guess they would pronounce Susanna a “phat babe.”

Thanks so much for such an interesting post. I love reading about real people living in a period I find fascinating.

I think Susanna is amazing, not only for her bravery and steadfastness in such harrowing situations, but also because she did it all in a riding habit which unless one was custom made for her would still have been cumbersome in the field of battle.

I hope you let us know when you get those other photos. I’d love to pop by your site to view them.

Thanks, all- I’m so glad you love Susanna too! I think I really do want to write her biography, or a fictionalized one, especially if her descendant will agree and help me with information. She’s somebody who deserves more recognition than history has given her.

I’ll be sure to let you know about how all this works out.

A physics conference? It must be real love for her to follow you there. 🙂

Well, seeing as the last one I attended was in Nice, I’m not sure it’s a sacrifice! 🙂

OK, well, sometimes we do have them in nice places. Or Nice places. Whatever. But the odds of being cornered by random physicists and talked to are still high!