It will be no surprise to anyone who reads this blog that I subscribe to way more fashion magazines than are good for me. This year, I have resolved to save money and cut back to just 2 or 3. But which ones? I really ought to cut Vogue. They often have, er, questionable cover model choices (Blake Lively? Really? Don’t they know those Gossip Girl clothes are chosen by a wardrobe team???), condescending articles about The Wonders of Shopping at Target (who knew?), and too many socialites no one has ever heard of, yet who Vogue seems to think we should really, really care about. And yet, Vogue, I just can’t quit you. Because once in a while you come with a fabulous issue like the new March ’09.

I squealed when I opened my mailbox and saw this gorgeous Michelle Obama cover. It makes up for Blake Lively last month. Plus articles about Carla Bruni-Sarkozy, Queen Rania of Jordan, and one about English country estates incorporating contemporary art into their gardens (like Sudeley, Lismore, and Houghton Hall. I’m not sure what I think about this, really, after seeing that ridiculous Koons exhibit at Versailles last fall, but the houses look gorgeous…)

The Obama article actually deals very little with fashion, aside from a couple paragraphs and some speculation as to what influence she will have on American style. Obama says, “I love clothes. First and foremost, I wear what I love. That’s what women have to focus on: what makes them feel comfortable and beautiful. If I can have any impact, I want women to feel good about themselves and have fun with fashion.” 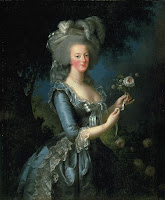 Fashion ‘leaders’ are nothing new, of course. There was Cleopatra, Helen of Troy, etc. And Marie Antoinette became Queen of France at a very young age, after a long line of dowdy, dusty queens (it was seen as a mistress’s job to be fashionable, not a queen’s). Caroline Weber, in her great book Marie Antoinette: Queen of Fashion says, “From her earliest days at Versailles, Marie Antoinette staged a revolt against entrenched court etiquette by turning her clothes into defiant expressions of autonomy and prestige.” And others followed her lead, even as she shocked with her rebellious innovations. Felix de Montjoie, in his 1797 biography of the queen, said, “By one of those contradictions that are more common in France than anywhere else, even as the people were criticizing the Queen for her outfits, they continued frenetically to imitate her.” 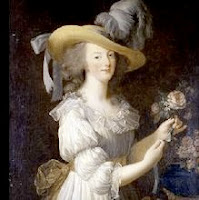 She introduced the “pouf” hairstyle, the idea of a ‘trendy’ color (such as the vividly named ‘caca dauphin’ when her first son was born), and the frilly muslin ‘gaulle’ dress and straw hat (“the unofficial uniform of the Petit Trianon,” says Weber). She also liked polonaise-style gown, the masculine-tailored redingote and tricorn hat for riding, and shorter trains and smaller panniers even for court life.

In England, queens were also not traditionally looked to for fashion trends. (Not since Elizabeth I, maybe, with her ruffs and white makeup. No one asked Queen Charlotte for style advice, I’m sure!). That was up to ton ladies, especially dashing, charismatic ones like Georgiana, Duchess of Devonshire. Her every outfit, every accessory, was observed and avidly copied (towering plumes, picture hats, colors like “Devonshire brown”). The gaulle caught on in England when Marie Antoinette made a present of one to Georgiana (which she then wore to a ball given by the Prince of Wales, setting off a furor). The Lady’s Magazine wrote, “all the Fair Sex now, from 15 to 50 and upwards…appear in their white muslin frocks with broad sashes.”

In 1785, a purveyor of perfumes and toiletries advertised he had ‘just imported a quantity of curious, beautiful, and sweet Powder a la Duchesse, or Devonshire Powder.’ In 1786, a scandal ensued when one of her dressmakers sold drawings to several ladies, supposedly of Georgiana’s latest gowns. Imagine the horror when they all showed up at a ball in the same gown–and Georgiana in something else entirely! 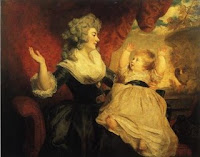 She was, like Marie Antoinette, not shy about using fashion in the service of politics. She often wore the Foxite “blue and buff”, especially when on the campaign trail. During the first Regency crisis, she and her friends donned a ‘Regency cap’ designed after the Prince of Wales crest with three feathers.

There could, of course, be a post days long on the crazy fashions of Marie Antoinette and Georgiana! I’m only grateful now that Michelle Obama tends toward sleeveless dresses as a trend and not poufs. But what do you think? Who are some of your favorite Fashion Icons? (I like Audrey Hepburn and Coco Chanel).

And be sure and check out my Oscar picks here, and don’t forget to become a ‘fan’ of Risky Regencies on Facebook! Happy weekend, everyone…

I heart Audrey Hepburn and Coco Chanel too, Amanda. Even the Duchess of Windsor had a certain style. And how can one forget Princess Diana. I also think that although she sometimes makes questionable choices, Sarah Jessica Parker is pretty cool. She takes risks that don’t always come off. I love the dresses that Marchesa and Carolina Herrera make, and I love my Alice Temperley dress that I bought at Target. What do you think of Alexander McQueen’s stuff for Target?

Oh, and I can’t quit In Style (the British version)or Lucky.

I love Sarah Jessica Parker’s style. She has fun with fashion.

I can think of a couple of icons from the 60’s – Jean Shrimpton and Twiggy defined that era.

I love the 1930s and 1940s, so my style icons are the actresses dressed by Adrian, Dolly Tree, Edith Head, Irene, and Bernard Newman.

I recently quit Vogue because of the reasons you mentioned and because of their only recently-slightly-loosening clutch on all white models. However, I won’t give up my Lucky subscription. I’ve been with them since the beginning and they’ve never let me down. 🙂

“What do you think of Alexander McQueen’s stuff for Target?”

I’ve only seen a couple of small pics so far–I think they’re probably too “young” for me, but I’m so excited he is doing a line for Target! I’ve had so much fun with their GO International stuff, and have a couple Thakoon skirts and dresses to wear when (if) it gets warmer.

Princess Di would have been a perfect example to include in a “fashion as power” post, if I hadn’t already rambled on too long! 🙂 She didn’t always make the very best choice, but she really knew how to communicate with clothes, and her style was evolving into something so elegant and simple at the end of her life.

And I do like SJP! Sometimes she really brings the crazy (like that plant as hat thing), but she’s always original and interesting. Plus she just seems so nice.

And “Lucky” is definitely on my list to “save”! A magazine all about shopping, how can I leave it? 🙂

“their only recently-slightly-loosening clutch on all white models.”

Sadly, this doesn’t seem to be something limited to “Vogue.” 🙁 It’s inexcusable, especially with gorgeous models like Chanel Iman out there. And why do we never see Asian models at all??

It will be interesting to see if Michelle Obama has some kind of influence on this, too.

My favorite fashion icons are Elsa Schiaparelli, Coco Chanel, and Claudette Colbert. Off the top of my head.

Audrey Hepburn will always be iconically fabulous. I miss Cher. And I admire Betsy Johnson, even if I probably wouldn’t wear her label. I like stuff like Anthropologie.

If I were a public persona with bucks I’d be a Nanette Lepore girl. I go gaga over most of her line, whatever season.

I’ve always admired Jackie O’s fashion sense and Katherine Hepburn. Their style was simple and classic. Styles of the ’40s are also a favorite of mine.

I also love vintage clothing for the same reason, particularly cocktail dresses of the forties, fifties and sixties.

“If I were a public persona with bucks I’d be a Nanette Lepore girl.”

I agree, Jane! I love the aesthetic of Nanette Lepore (I have one precious dress I bought on sale), and would have to have more from that line. I always admire the Betsey Johnson party dresses in the store, they’re so cute and fun, but when I give in to temptation and try one on I look ridiculous. 🙂

I’ve been looking at the Fall ’09 fashion shows online, and am really liking Jason Wu’s new line. I hope he builds on the momentum the inaugural gown has given him!

I’m lucky enough to own several Nanette Lepore pieces that I bought at one of her sample sales. Her stuff is gorgeous and slightly vintagey which I like. I’ve recently found that someone has been designing clothes inspired by Bettie Page, that are absolutely va-voom.

I’m with you on Audrey Hepburn and Coco Chanel. And Katherine Hepburn and Lauren Bacall wore some of the most elegant and gorgeous “casual” clothes I have ever seen.

Princess Diana always looked classy and comfortable in her clothes. I think that might be the reason so many people are drawn to Michelle Obama’s style. She looks elegant, but she always looks COMFORTABLE in her clothes and that is a great selling point to me.

Audrey Hepburn was and still is a fashion icon to me. She is and was the very essence of a lady. I also think Nicole Kidman is another. And finally Marion Cotillard the actress from La Vie en Rose (the movie about Edith Piaf).
Carol L.

If I were super-thin and rich I would run around in 50s sleeveless dresses with little white gloves. 🙂

Wish I was somewhere they had sample sales (sniffle)

Cara, then you would look just like a character on “Mad Men”! Could you get Todd to wear a suit and a fedora, too?

And Carol L., you are so right. Marion Cotillard and Nicole Kidman both have an elegant “ladylike” style about them I like a lot (though I didn’t much like Kidman’s Oscar dress this year!). I wish I could be reincarnated as a French woman…