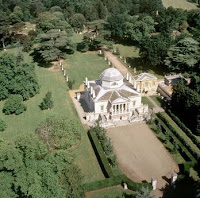 March is a strange month. It’s not quite the “armpit of the year” (that would be February, the Darkest Month), but it’s not quite spring, either. Sometimes it’s cold (last week), sometimes summer-warm (this week), and it’s always allergenic. But I can see spring just over the horizon as the tips of my lilac bushes turn green, and Daylight Savings Time (not to mention St. Patrick’s Day) is only a couple weeks away!

One thing I’ve been doing this week is planning my garden. I have a tiny house with a wee back yard, but I do like to put in flowers along the front walkway and in pots on the porch, and I have a vegetable patch in the back yard. I’ve been looking over seed catalogs, and think I’m going to try some new heirloom tomatoes this year, as well as cucumbers, green beans, and peppers. Any other suggestions? 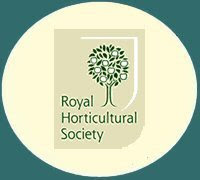 The Society was first suggested by John Wedgwood (son of Josiah) in 1800. “He wanted to hold regular meetings, allowing the society’s members the opportunity to present papers on their horticultural activities and discoveries, to encourage discussion of them, and to publish the results. The society would also award prizes for gardening achievements.” It was 4 years before the first meeting, with 7 members, on March 7, 1804 at Hatchards bookshop in Piccadilly, London. The other members included William Townsend Aiton, Superintendent of Kew Gardens; Sir Joseph Banks, President of the Royal Society; and William Forsyth, Superintendent of the gardens of St. James’s Palace and Kensington Palace.

The RHS now has 4 flagship gardens in England, all of which look gorgeous. Wisley Garden, near the village of Wisley in Surrey (pictured at left); Rosemoor in Devon; Hyde Hall in Essex; and Harlow Carr in Harrogate, North Yorkshire. Their first garden was in Kensington from 1818 to 1822, and in 1821 they leased part of the estate of Chiswick to set up an experimental garden. They held fetes there, and shows with competitive classes for flowers and vegetables.

They’re also famous for their annual flower shows, the most well-known being the Chelsea Flower Show. There are also 8 London Flower Shows at the Royal Horticultural Halls, the yearly Hampton Court Palace Flower Show, and Tatton Park Flower Show in Cheshire, and they also administer the Britain in Bloom competition. (I’ve never attended one of these shows, but I love looking at the photos every year and trying to find out if the plants featured would also flourish here). 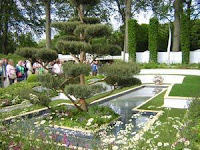 A good source to learn more about the RHS is Brent Elliott’s The Royal Horticultural Society, A History: 1802-2004.

Reading about all of this just makes me want spring to get here sooner, so I can go out and dig in the dirt! Do you garden? What are some of your favorite “crops”? And if you’ve ever attended one of these flower shows, or seen the RHS gardens, tell us about it! Happy almost-spring, everyone…

My mother and aunt used to plant a garden every year, flowers and always a couple of tomato plants. I’d love to grow tomatoes but we don’t have any good place.

I love to have flowers in a garden, but I don’t like to take care of them! I need a gardener.

Fascinating post, Amanda! Definitely need to pick up that book. I remember touring lots of gardens when we lived in England, but I don’t remember the names of them, darn it. (Turning 50 is NOT for sissies!)I just remember my Mom LOVED to take us to these gardens. Our little cottage had a back garden covered with paving stones and our front garden was very small. It did have a darling half wall / half wrought iron fence around it. My Mom had all sorts of roses in that small space. Her neighbors were quite envious.

I have roses, azaleas, rhododendron, tulips, hyacinths, honeysuckle and three types of wisteria that threaten to take over the entire five acres every year. I also have a little mini grape arbor.

Try grapes, Amanda. They are easy to grow is you have some tall flat surface to train them on – or even do like I did. I made my arbor from those plastic lattice panels you can get at Lowe’s.

O Divine One, I wonder if Gerrard Butler does gardening work? Can you imagine having HIM as your gardener? SWOON!

I would love to have one of those arbors at the front of my walkway! I was thinking climbing roses, but a grapevine might work even better. (I have a few rose bushes, but they have to be very hardy to do well here. My bulbs are coming up now, though!!)

“if Gerrard Butler does gardening work? Can you imagine having HIM as your gardener? SWOON!”

It would have to be in his contract that he works shirtless, of course! 🙂

Diane, I also don’t like to put in a huge amount of time with the plants! (the time just isn’t there, for one thing…) so I try to plant stuff that does well with minimal tending. I planted tomatoes last year in a sunny spot, gave it some tomato food once in a while, and they went crazy! My parents grow them in pots on the patio, too, you might buy one of those and give it a try.

Gillian, I’ve heard mint goes totally crazy! But I love it in iced tea. Maybe I can find it its own corner. I also like to grow herbs in pots, rosemary, basil, stuff like that.

Ammanda, er, Daylight Savings Time is tonight at 2am, not two weeks away.

Zuchhini is said to grow easily. How about spinach?

What’s a flower show? Is it like a horse or dog show? Or is it more like a flower auction? I’d love to visit the flower auction at Alsmere in The Netherlands.

I don’t garden, but like Diane, I do love flowers in the garden. Perhaps this year, we should look into a gardener. Our problem is that in general, Seattle gets very little sunlight throughout the year, and our backyard, almost none, except for August, since the yard backs into a regional forest with very tall firs.

The National Rose Collection at Mottisfont Abbey is well worth a visit, particularly in late June. The setting and grounds are lovely, and many of the antique varieties on display date from the Regency or earlier.

Mottisfont is in the general vicinity of Steventon–a site familiar to Jane Austen pilgrims–as well as Winchester and the cathedral, where her grave site is located.

This is the second year we’ve actually had space in which to garden, but I usually leave all that to my MIL.

I do love my herbs, which i’ll have to go get soon.

It’s in the 50’s here and sunny today so I’ve been weeding. The “kittens” think this is great fun.

Nature has taken over my suburban home in the form of deer and gophers, so I’m down to a few pots where they can’t get at them!

“Mottisfont is in the general vicinity of Steventon–a site familiar to Jane Austen pilgrims–as well as Winchester and the cathedral, where her grave site is located.”

Sounds like a wonderful tour idea! I do love those antique rose varieties.

Actually got outside and started weeding the veggie patch today! I get so excited when the weather turns warm 🙂

Thanks for the “timely” reminder, Keira! Have you ever tried a hosta or a helleborra in the shade? I know there are lots of very pretty ground cover plants meant for the shade, too, but maybe not for the Seattle variety of shade

Diane, I have an entire book on city gardening, using pots, as Amanda suggested.

Keira, shows and auctions are very different events. When I lived in London, I just missed a show at Kew Gardens. You can buy plants at the garden, but it is all about displaying the species at it’s best. In Holland, my cousin took me to a flower auction, where batches are displayed with the sole purpose of sale.

I love sweet peas, sugar snap peas, spinach, and broccoli. Truth be told, I love broccoli fresh from the garden so much I find any other kind intolerable. Crookneck squash and zucchini are yummy, sauteed with a shaving of fresh Parmesan. I sowed my first garden when I had a horse. The fertilizer was free, after all; it seemed silly not to take advantage. LOL!
~Judy

Thanks, Keira — I *thought* daylight savings started tonight! (Though it does seem awfully early…) 🙂

I have potted plants on the balcony (including a TREE that appeared out of nowhere in one of my pots one day) but no earth….earth would definitely be nice, but I also like that I live in walking distance to two movie theaters, tons of restaurants, and some actual theaters… (And now that it’s spring, maybe I’ll actually do that walking!)

I love touring gardens (Sissinghurst and Exbury are the favorites of those I visited in England) but as for my own gardening, it’s kind of “survival of the fittest”. I don’t bother with tulips any more (the deer eat the flowers off, leaving a naked green stem) or crocuses (the chipmunks dig them up). I do have loads of daffs. My favorite variety is “Ice Follies”. They bloom early and have a sweet scent. And nothing eats them. 🙂

Diane, I have an entire book on city gardening, using pots, as Amanda suggested.

But my deck faces the woods and gets very little sun. The front of the house gets full sun in the afternoon, but I can’t bring myself to plant tomatoes in my front yard.

I miss gardening. I used to do it before I wrote. Like Diane, I don’t have a good place for tomatoes because I’d like to have some.

Mint does take over–however, there are worse things, like poison ivy…

There’s an heirloom rose collection at the National Arboretum in DC (along with a superb collection of bonsai and the original Capitol columns). Sadly the blooming period will be long gone by the time we’re all there in July–they bloom early, usually late May/June. Even though I live five minutes away I’ve never managed to see them at their peak.

What lovely pictures and thoughts. Our weather has been warm but the grass is still very brown and only a few little plants are poking up out of the ground. Waiting to see if another storm comes through before they make a full appearance.

My husband does the gardening around our house. A bright, cheerful, always-something-blooming flower garden in front and his relax-after-work garden in the back. Lots of zucchini, some broccoli (something tends to eat the plants before we get them), tomatoes of various sizes, and melons if we’re lucky. When we were first married, we lived in a house that had asparagus and raspberries – not had any luck in our new location with those.

Now I’m eager for fresh produce on the table.

Thank you for clarifying that!!

Ammanda wrote, “I know there are lots of very pretty ground cover plants meant for the shade, too, but maybe not for the Seattle variety of shade.”

First of all there’s the Seattle weather. Then our back yard backs into the regional forest, so except for a month or two of summer, our yard’s moss, collected water, dead black moss…er, you get the picture. I want that lawn killed and paved over. Too bad for association rules.

Perhaps, this year, I should attempt have a gardener bring some color to our front yard.