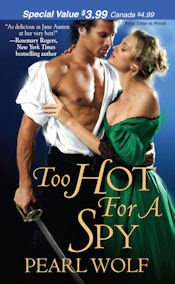 Today we welcome to the Riskies debut author Pearl Wolf whose book Too Hot For A Spy debuts this month. She’ll give away an autographed copy of the book to one person who comments or asks a question, so drop in, say hi, and chat.

Readers who enjoy action-adventure series by Celeste Bradley have a treat in store with Wolf’s daring debut. The nonstop pace, feisty heroine and alpha hero will take you on a wild ride as two strong-willed people encounter their match in a sizzling tension-filled love story. — Romantic Times Bookreviews – 4 Stars

Pearl, welcome to the Riskies and congratulations on the release. Tell us the story behind the story—how did your book come about?

For one, history is my passion. For another, large families fascinate me, since I grew up in one. Put the two together and you have Too Hot For A Spy, out in March. This is the first in the series about the Fairchilds, the children of the Duke and the Duchess of Heatham.

Tell us about your journey to publication.

My generous friend, noted author Shelley Freydont (AKA Gemma Bruce) who is my critique partner as well, introduced me to her agent Evan Marshall. I sent him a partial—three chapters and a synopsis, expecting him to decide whether or not he would represent me. Two weeks later he called and said he’d sold a two-book contract to Kensington Publishers.

It’s one of the most colorful periods (1810-1820) in English History. My fictional characters live within a world informed by that history, just as we live in our world today.

What do you love about the period?

Royalty dictated a strict code of behavior then, but breaking the rules ran riot anyway. No author wants to write about characters who play by the rules when it’s so much more fun to write about the rebels.

What do you dislike about the period?

Given my rebellious nature, I wouldn’t have fared very well living in this period. I might have been beheaded given the fact that, like my heroine Olivia, I have enormous difficulty following other people’s rules.

Who are your writing influences?

The risky question: What risks did you take with this book?

Women take risks even though we struggle against impossible odds. Today women break records in spite of those odds: The glass ceiling; outer space; presidents and prime ministers of our country. The list is endless. My heroine Olivia, the daughter of a powerful duke, had a tougher time in the Regency period. She risks everything and manages to succeed in an all male spy school against all odds.

What makes it stand out?

Olivia’s determination is key. In spite of the obstacles she faces because she’s a woman, she succeeds. She submits to the humiliation of scrubbing the kitchen galley on her hands and knees with the same determination she shows in mastering push-ups, something she’s never done before either.

I’ve just completed Too Hot For A Rake, due out in 2010. Olivia’s younger sister Helena, a timid young woman who is jilted by her betrothed, must decide what to do with her shattered life. I’m already thinking about the third book in this series, Too Hot For A Scoundrel, about Georgiana, another of the duke’s daughters. Bitter Steppes, a stand-alone Russian historical saga that takes place in the time of Catherine The Great is high up on my list of projects as well.

How old are you? (Riskies disclaimer–Pearl made us do it!)

I turned seventy-nine a short time ago. Imagine! I’ll be eighty years old next year. That’s middle age, isn’t it?

I’ve already slapped your book on my BTB list. The whole series sounds good and my kind of read! I’ve checked out your website to read more about your work. And I have to say, Pearl, that in your picture, you certainly DO NOT look like 79. And yes…that’s only middle age! I’m 65 and I’m just a kid! LOL

Pearl, you bet your sweet bippie that’s middle age! You prove one of my favorite quotes by George Eliot: “It is never too late to be who you might have been.”

Welcome to the Riskies and congratulations on such an exciting debut book! And I love your “Call” story. Talk about skipping all the anxiety!

Hi Pearl, great to have you here.
What sort of system do you use to keep your characters straight in the series?–index cards, a binder, an excel document? I’m always fascinated by the mechanics of writing a series. I’d never dare try it myself!

Hi Pearl,
Major congratulations on the release of Too Hot For A Spy! Your heroine, Olivia, sounds like a character I will love to read about. You just have to admire a determined woman. It has been a while since I have read a book with a female spy, so I will definitely be picking this book up. I enjoyed reading your interview.

Stood up and cheered when I read your age, Pearl! I started writing seriously a little over two years ago and I just turned 50 in December. I wanted to be published before I was 50, but hey, looks like I’ve got a bit more time. That is fantastic!

Your call story is amazing! What was your reaction when Evan told you what he’d done?

Like Janet I would love to know how you organize your writing AND what are your favorite research resources?

Can’t wait to get my hands on this book. I LOVE a good spy novel! Congratulations on your debut!

Hiya to the blog! 🙂 Can’t wait to get it, it’s been on my list for a while now. . . I mean, Regency, and spies, two of my favorite things! 🙂 And wow, you sure give me hope that it doesn’t matter how old one is they can still find what they want to do — I’m 32 and utterly clueless on what I want to do! 🙂

Hi Pearl,
Congratulations on your new book. Although I enjoy stories set in every time period when I have to pick a favorite it’s always the Regency period that wins. Your heroine sounds like a fascinating character.

Thanks for all the heads up! I keep separate detailed studies for each and every one of my fictional characters, including description, weaknesses, strengths, etc. in word files. I print out a shorter description which hangs over my desk until I finish the book.

Wow, a debut author at seventy-nine! No wonder you like to write about heroines with determination. Congratulations on the debut. Thanks for inspiring me today.

Pearl, what a great story! May you write dozens more. Louisa you baby. I’m 53.

Pearl, welcome to the Riskies. I’m so thrilled to see your interview here. (Thank you, Janet.) Congratulations on your debut book.

What a fabulous call story. Was this the first story you wrote that you submitted to your agent? Or did you write for a few years before submitting? What made you choose to be a writer. Did you always want to be one?

I had a big chuckle over your likelihood over being beheaded were to travel time back to the Regency. However much I love to read stories set in that era, I wouldn’t want to live then. Hygiene, among various reasons, comes to mind.

I grew up in the usual nuclear family, and so stories about large families always fascinate me.

Welcome once to the Riskies. What a marvelous opportunity this is to “meet” you. And I’m so pleased that you’re now a published author. Good on you!

Diane, what a marvelous quote. I love it.

Hi Pearl,
Congrats on your debut release. What romance sub-genres do you enjoy?

I take my hat off to you–that’s some serious determination you go there.

Here is wishing you many more goals reached in the future.

Big, big congratulations on your debut novel. And the follow up books sound very intriguing too.

Hi Pearl! Congratulations on your new release! Too Hot For A Spy sounds fabulous! I’m a history buff as well and the Regency period is my favorite. They had such strict rules back then. It’s just so much fun to create characters that break those rules! I love great adventure stories and your book sounds like it will be an exciting one! Looking forward to this book and the others in your series!

Congrats on the new release! It sounds like a delightful story, and I love that it is the beginning of a series.

Thanks for visiting today. I really enjoyed reading your interview.

Hello Pearl, great interview, I loved it. I am fasinated by you book and would love to read it. I will be putting it on my wish list because I love books set in this time period. I would be like you they would be head me if I lived in that time period because I have a mind of my own and wouldn’t follow the rules very well. I really admire you for following your dreams at your age but I would have never guess your age, you sure don’t look it. And yes that would be middle age.

Thanks, for sharing your journey with us!

Sounds like exactly the kind of book I like. Lots of action and a non-traditional heroine. And it’s nice to hear there’s hope for those of us who are older than 25. Best of luck.

Sorry I’m late jumping in here to say welcome to RR! This time change has me flummoxed. 🙂 What a wonderful inspiration your story is, and a reminder to all of us to do what we love and never be discouraged (the book’s story sounds great, too, LOL)

The kitchen scrubbing/push-ups bit really caught my attention. I love a determined heroine.

wow Pearl, you go girl!!! This is an amazing story and good for you. Looking forward to reading about a female spy.

What a marvelous interview! I can’t wait to read your books!

Hi Pearl,
Wow, Congratulations on your debut
book. I love it, 79 and here I thought at 61 things were slowing down. lol for me that is. Just goes to show you . I think it’s wonderful. I love Regency Romance and this is a book to go on my book list.
Thanks again for the interview Pearl.
Carol L.

I’ve never heard better news re age. I had always planned to be the Grandma Moses of Romance Writing, but I’ll graciously cede the title to Pearl. Way to go! Your book sounds like such fun. Looking forward to it and many more ahead!