Golden? I don’t think so

I wandered lonely as a cloud
That floats on high o’er vales and hills,
When all at once I saw a crowd,
A host of golden daffodils;

But they weren’t golden. We’ve been fooled! 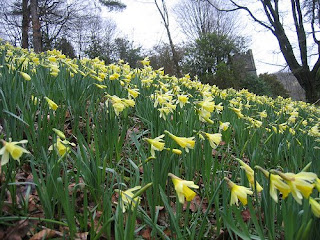 The daffodils Wordsworth saw were not the golden daffodils that were developed half a century later but the native species narcissus pseudonarcissus aka the Lent Lily which is a paler color. They’re not particularly popular today because they’re, well, lackluster if you lack poetic vision and don’t last well in a vase.

Daffodils became big business–and golden–in the latter half of the nineteenth century when commercial market gardening took off. The National Trust started a project in 2001 to identify historic varieties of daffodils–you can read about it here. 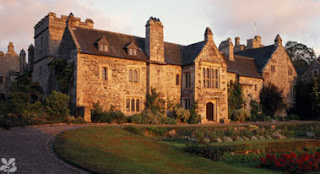 I find it rather appealing that the director of the project is a former International Daffodil Registrar (“… and what do you do?”). The project is conducted at Cotehele House in Cornwall where it’s estimated there may be as many as 400 unidentified species of daffodils lurking in hedgerows.

Here’s a US source for historic daffodils and an article on their history at Old House Gardens.com –they were introduced into England in the thirteenth century!

And have you noticed that the more you say the word daffodil the sillier it sounds?

Talking of silly names, the village of Tolpuddle in Dorset is where a courageous group of farm laborers living on starvation wages formed a trade union and were transported to serve as an example to their peers. The Tolpuddle Martyrs are still revered as champions of liberty and the trades union movement and today is the anniversary of their sentencing to seven years transportation in 1834. More at my other home away from home online at History Hoydens.

Do you have any favorite silly words or are daffodils blooming yet in your yard?

Interesting! I’ve been under the weather and wanted to go to Trader Joe’s and get some daffodils to cheer me up. So they’re Victorian, huh? I also adore sweet peas and like to get the “heirloom” varieties that smell so good.

All I have now are a few tulips in pots. Nature has taken the upper hand in my yard in the form of deer and gophers.

It’s very strange, every time I see a pic of Cotehele House I start to get all emotionally choked up. I’ve never been there, but it’s as if I have a strong connection to the place. Perhaps I was one of those servants putting in the bulbs? 🙂

Trader Joe’s daffs are from Ireland–I bought some in mid-February when it was very cold here and I craved some spring flowers. Now daffodils and crocuses are blooming in my yard.
Deer won’t eat daffodils–about the only thing they won’t–but do gophers?
Doesn’t Cotehele look gorgeous!

I have daffodils springing up in my front yard, haven’t unleashed the yellow yet, though.

My MIL came to plant pansies in the front and crocuses in the back.

I really love flowers. And in other controversial opinions, I like a good piece of chocolate and think Brad Pitt is the sexiest dad ever.

Not only weren’t they golden, they weren’t exactly a crowd. Nor saw he “ten thousand.”

In fact the whole incident (I learned belatedly a year or so ago) was cribbed from Wordsworth’s brilliant sister Dorothy’s Grasmere Journals, the original much simpler, free-er, less hyped up and self-regarding.

When we were in the woods beyond Gowbarrow park we saw a few daffodils close to the water side. We fancied that the lake had floated the seeds ashore and that the little colony had so sprung up. But as we went along there were more and yet more and at last under the boughs of the trees, we saw that there was a long belt of them along the shore, about the breadth of a country turnpike road. I never saw daffodils so beautiful they grew among the mossy stones about and about them, some rested their heads upon these stones as on a pillow for weariness and the rest tossed and reeled and danced and seemed as if they verily laughed with the wind that blew upon them over the lake, they looked so gay ever glancing ever changing. This wind blew directly over the lake to them. There was here and there a little knot and a few stragglers a few yards higher up but they were so few as not to disturb the simplicity and unity and life of that one busy highway.

Nor was he lonely as a cloud. Dorothy was there, dammit.

We stayed in Piddletrenthide in Dorset. Lovely place, funny name.

My bulbs are still buried under four feet of snow. Sigh.

They flash upon that inward eye
Which is the bliss of solitude.

We tend to color our memories more fondly than reality. Perhaps his joy made the daffodils more golden.

I have to admit when I saw that first line about the cloud, my mind went first to Winnie the Pooh (I’m just a little black rain cloud), not Wordsworth. Clearly, the literary level in our household has reached a new low.

“(I’m just a little black rain cloud), not Wordsworth. Clearly, the literary level in our household has reached a new low.”

Or maybe the weather has just been gray for a while? 🙂

My daffodils are starting to fade now (they’re not a host, either–just a clump by the porch), but I noticed tiny purple buds on the lilac bushes, so yay! Go spring!

The daffodil is the national flower of Wales, from whence my paternal ancestors hail. It is worn on St. David’s Day (the First of March, if memory serves.)

I have several nice clusters of daffodils on my five acres. I also have a small host of hyacinths as I LOVE them. I have day lilies in every color and I also have an entire hill covered with azaleas. I have a variety of rhododendrons, which I planted and nurtured because people said they wouldn’t grow here. I also have numerous rose beds and a Queen Elizabeth climbing rose that has grown over the house and is headed for the other side. I have forsythia and dogwoods growing wild throughout the property. I DO love Spring! Oh, and I am waiting to see which of the tulips I planted are going to bloom. I even planted black tulips! I hope they come up!

I love the word serendipity myself 😀

I’ve been to the Daffodil Festival in Gloucester, VA, one year. It was full of “golden daffodils”

I wonder what Wordsworth’s sister thought about him using her writing to inspire his poem. Intereting tidbit.

Don’t you just love how Janet finds these little treasure of information???

I love daffodils. I can never have enough. I would be happy to have them all year. My husband knows I like daffodils and he goes out his way to bring them to me. If you want to read another post on daffodils, here’s one I did

Ack! I walk out the door this morning and I’m down to one tulip!
Last summer I lost six rosebushes. Something underground polished off the rootballs while the deer ate them down from above. I think I shall stick to the pots on my porch and turn the rest into a nature preserve.

No interesting sounding vegetation in my yard, well, except maybe the jacaranda, which I pronounce with the j-sound but should be pronounced with an h-sound. Or maybe the bougainvillea, if I can spell it, which of course has no l-sound.

The daffodils around here bloomed in January and February and are only memories now. The stores have them though. When I lived in London, my auntie took me with her ladies group on a daffodil tour. One of the places we stopped, the quad instead of being grass covered was daffodil covered. She laughed and told me the little things were like weeds. They’d spread from their beds out into the surrounding forest area. What a sight it was!
~Judy