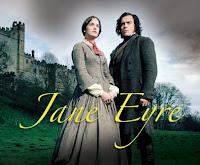 Happy weekend, everyone! The sun is shining, flowers are blooming, it’s spring–and I wrote The End on my WIP. It is Fug Madness on Go Fug Yourself. I have Reese’s Peanut Butter Eggs. Happy, happy, happy Saturday! I also have a few updates on my Amanda McCabe site here, including an excerpt from The Diamonds of Welbourne Manor. And Laurel McKee’s site is having its Big Debut, right here! A few tweaks still need, well, tweaking, but there’s release info, historical background on Ireland in 1798, and an excerpt. Let me know what you think!

A few days ago, I took a quiz on Facebook called “What kind of writer are you?” I got the result–Jane Austen. Woo-hoo! What romance writer wouldn’t love that? But then I started wondering if, in real writing life, I might owe more stylistically to the Brontes. I do love the Dramatic Moment, the Big Reveal, the whole wandering on the moors shouting things like “How can I live without my love?” type stuff.

Maybe it’s because Jane Eyre was the first “classic” I ever read (except for things like Anne of Green Gables and Little Women), and wow did I love it. I’ve been a sucker for 19th century England (and moor-wandering) ever since. I adore the Brontes, both their books and their oddball family story.

Which seems appropriate, since in one month from today, on April 21, it will be Charlotte Bronte’s birthday! Nothing like an early happy birthday. She was born April 21, 1816 in Thornton, Yorkshire, the third of 6 children of Patrick Bronte, clergyman, and Maria Branwell. In April 1821, the family moved to the famous parsonage at Haworth (you can see its website here), where Patrick was appointed Perpetual Curate. Maria died in September that year, leaving her five daughters and son to the indifferent care of her sister, Elizabeth Branwell (who seems to have stayed mostly in her own room!). In 1824, Charlotte and 3 of her sisters (Emily, Maria, and Elizabeth, Anne being too young) went to the Clergy Daughters’ School at Cowan Bridge in Lancashire (which gained infamy as the wretched Lowood School in Jane Eyre). Maria and Elizabeth died there, and Charlotte and Emily were never really healthy afterwards.

Back home at the parsonage, Charlotte, Emily, Anne and Branwell set about chronicling their imaginary worlds of Gondal and Angria, convoluted sagas that still exist in partial manuscripts. Charlotte went on to continue her education in 1831 at Roe Head, where she wrote her first novella, The Green Dwarf (1833). She taught at the school from 1835 to 1838, taking up her first governess position in 1839. In 1842, she and Emily went to study in Brussels, at a pensionnat run by Constantin Heger and his wife Claire. After Emily departed, Charlotte’s stay in Brussels took a turn into loneliness, homesickness, and a crush on the married Constantin (this time was used as inspiration for her later novels The Professor and Villette).

Back home again in Yorkshire, the three sisters published a volume of poetry in 1846, under the names of Currer, Ellis, and Acton Bell (the volume only sold 2 copies, but the names stuck for a while). Jane Eyre was published to much acclaim in 1847, but much sorrow was just around the corner. Branwell, rumored to be a drunk and a laudanum addict, died in September 1848. (When I dropped into the National Portrait Gallery last fall, I made a point of going to look at his portrait of the sisters which hangs there). Emily and Anne died soon after, in December 1848 and May 1849, leaving Charlotte alone with their father. 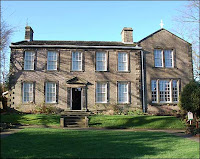 But things were not entirely bleak. After the great success of JE, Charlotte visited London occasionally, where she revealed her true identity and met other authors, including Harriet Martineau, Elizabeth Gaskell (who wrote the first Charlotte Bronte biography), Thackeray, and GH Lewes. In June 1854, she married her father’s curate, Arthur Bell Nicholls, and soon after became pregnant. She died, along with the unborn child, on March 31, 1855, at the age of 38. She was buried in the Bronte family vault in the Church of St. Michael and All Angels at Haworth.

I have a big pile of Bronte biographies on my shelves, but some favorites are: Juliet Barker’s The Brontes; Rebecca Fraser’s Charlotte Bronte; Margot Peters’ Charlotte Bronte, Unquiet Soul; and The Oxford Reader’s Companion to the Brontes.

Do you love the Brontes, too? What are your favorites among their books? Anyone visited Haworth (I haven’t had the chance yet, but it’s high on my Travel Wish List!) Have a good Saturday, everyone…

I adore the Brontes! But Jane Eyre is my absolute favorite. I can’t help but think that Charlotte got the only happily ever after of her life in that book – she WAS Jane. And Haworth is high on my list of places to make a pilgrimage to! Great post, Amanda! Thanks!

Louisa, JE is still one of my favorite books ever! I like that idea of it being Charlotte Bronte’s “happy ending.” And next time I make it to England, I plan on an Authors’ Pilgrimage–Chawton, Haworth, Hilltop Farm, wherever else I can think of. 🙂

Hi Amanda, I too adore the Brontes! When I was in London last week, I made my pilgrimage to the National Portrait Gallergy to see Branwell’s painting, and this time I saw a painting that was new to me of Emily as well. I’ve often wanted to go to Haworth, but I just never seem to get that far north on my trips. And Jane Eyre is my absolute favorite, perhaps because it has a happier ending than Wuthering Heights. OH, and I once played Anne Bronte in a staged reading of a play about the family.

Jane Eyre has always been my favorite Bronte’ book but I always seem to want Wuthering Heights to get up there, too. Sadly, that hasn’t happened yet. I simply want it to end differently and, dang it all, it never does!

I know it’s irrational but I’m allowing my little idioscincricies to take hold for a few minutes today (see my response to Megan’s post). It’s an exercise in letting go which is what I think Heathcliff really, really needed to do.

I’d love to visit Haworth. As a matter of fact, I think there should be a Grand Tour of England which includes both the locations our beloved novels take place and the places our favorite novelists grew up. I seem to remember such a tour but can’t recall its name.

Congrats on writing ‘The End’! I’ll pop over and catch up on your site later today.

Please forgive any typos or misspellings of the previous post.

We have dense fog outside this morning, but I just got a blast of sunshine in my Google Reader. A top o’ the morning to you, too, Ammanda. What a fabulously cheery post. Two days in the cave, and you’re done, done, done, well before the deadline.

Jane Eyre was the angst my teen heart craved. Charles Dickens’s school books were too depressing. This one has triumph and tragedy by turns so you keep losing your heart, piece by piece.

No time to read! I’m off to Nora Roberts’ party (I’m just saying…)

“It’s an exercise in letting go which is what I think Heathcliff really, really needed to do.”

LOL–to say the least! When I first read WH, I think I was too “young” for it, and didn’t like it at all. Now I’ve come to like it quite a lot, though I also can’t resist rewriting in my mind to make it more “romantical” (and make Heathcliff less a psycho).

I would LOVE a tour that combines sites from the books and real places the authors lived! I know JASNA is doing a tour this summer of Austen sites, and there must be a Bronte tour somewhere.

Sadly, it’s not totally done–I have to go back and fill in and do some tweaking, and look up a few research tidbits. But the hard part of actually getting the story onto paper is done!

Diane, tell us all about the NR party!!!

I love the Bronte’s works. I’ve read (even studied at university!)Jane Eyre, Wuthering Heights and The Tenant of Wildfell Hall. By the way, have you read Mrs Gaskell’s biography of Charlotte ? I noticed you mentioned it in your post. It’s very interesting since they were friends…and Gaskell is another of my favourites!
Happy weekend:):):)

I was JUST thinking about Jane Eyre, realizing how much of it–plot, writing style, etc.–affected my life.

And I got to get lit’ry on Wuthering Heights, when I wrote A Psychoanalytic Interpretation of WH for my psychoanalytic approaches to literature class.

But I love JE the best.

AND–congratulations on writing The End, Amanda!

I love the Brontes though like so many of you JE is my favorite. I love the moors, too, and have one story idea that cries out to be set in a remote corner of Yorkshire.

I like the new verification words. I almost always get something intriguing. This time it was “funtence” – a fun sentence?

“By the way, have you read Mrs Gaskell’s biography of Charlotte ?”

I have! I had to read it for a class once (on Victorian authors) and it brought me to read some of Gaskell’s own novels, which I’ve always been grateful for. 🙂 (and I just came across an interesting article online about the, er, not entirely truthful tidbits in the bio, LOL. Will have to try and find the address)

“I like the new verification words. I almost always get something intriguing.”

LOL–mine was “Undores.” I don’t know if that is when you don’t adore someone anymore, or a weird kind of underpinning…