Hougoumont or Anatomy of Researching a Scene

I’m starting in on a new book, the second in my Three Soldiers Trilogy. The last book ended at Waterloo and this one begins there, in the battle itself.

So my first decision was what part of the battle to use. 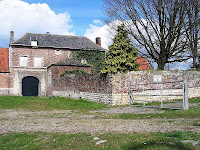 Some limits were imposed by just where in the battle my hero’s regiment would be, but I solved that problem. I first selected La Haye Sainte and read up on that part of the battle. The problem was, La Haye Sainte fell to the French right at the end of the battle and that didn’t work for me, so I started reading about Hougoumont.

I found some very interesting sites about Hougoumont.
Project Hougoumont, which aims to restore the site
A very detailed model of Hougoumont
Summary of the whole battle
Detailed timeline of the defense of Hougoumont, including how Victor Hugo got it wrong in Les Miserables.

I started pining to watch Waterloo, the epic 2 hour movie starring Rod Steiger and Christopher Plummer. I had a VCR copy but no working VCR. So I ordered the DVD.
I discovered another DVD about Waterloo, a documentary I’d seen on the History Channel. I ordered that, too (only to discover that I’d ordered it before…)

Then I hit on the idea to look on YouTube (Note to Everybody: you can find anything on YouTube). Sure enough they had clips of the movie Waterloo, enough to fill me with the sounds and sites of the battle.

I also ordered a book on Hougoumont. Hougoumont: The Key to Victory at Waterloo by Julian Paget and Derek Saunders (I always order some reference book when I start a new book)

I also poured through some of my relevant reference books on my bookshelves and braved falling over the clutter to get to them. Because they are shelved two (or three) deep, this was much like an archeological dig.

After all that I finally was able to write the opening scene of Chapter One.

Book One of my Three Soldiers Trilogy is scheduled for release in 2010, so who knows when this Book Two will come. Chances are I’ll be blogging about researching this book again!

How do you go about researching a scene or a topic? Have you found any other helpful things on YouTube?

Visit Diane’s website for a sneak peek of her eShort Story, The Unlacing of Miss Leigh, and her novella, Justine and the Noble Viscount, in THE DIAMONDS OF WELBOURNE MANOR. Diane’s contest is still on, too!

Wow, Diane, I never thought of looking up scenes on You Tube! Very cool.

I suppose I try to stay away from battle scenes. I can’t imagine it well, and the horror, confusion and turmoil make me a little sick with anxiety. WWII left my Dad with nightmares even forty years ‘later.

Kudos to you for such detailed and caring research!

Diane —
YOu should read An Infamous Army by G Heyer which is v good for the history. Andrew Roberts tends to be good as well.
But one of the best about Waterloo is A Week at Waterloo by Magdalene de Lancey — it is a first hand account

I like doing light research, a few books and movies, mostly for reference. Being dyslexic, reading can be a chore. My romance reading is for fun, so it doesn’t matter if I haven’t read it exactly right. Research scares me silly because I lose track of things and jumble them so easily. That being said, I really appreciate the research other writers do for their stories, and I know it shows in the writing. For myself, I tend to draw on personal experience or use the internet to look up websites that are applicable.
~Judy

Ladyhawk/Judy, I can fully understand why not everyone would enjoy doing this sort of research. I’m thrilled that you read for pleasure, because lots of people who have dyslexia don’t and miss out on so much.

Michelle,
I have read An Infamous Army and am ready Lady DeLancey’s memoir on my Kindle!
There’s a story in Georgette Heyer’s biography that when she and her son visited the Army Museum and viewed the Waterloo diorama, she was explaining the battle to him only to discover that several people were also listening, shocked that a woman was such an expert on the battle.

Donna, I’m an army brat and I suppose battles have fascinated me. What the battle experience does to the soldier also fascinates me. I think that the WAterloo movie does a marvelous job of showing what the battle must have been like.

I love YouTube. I set something in Yorkshire and found a fabulous tourist-y thing that made me feel as if I was right there (I have visited in person, but darn it, long before I knew I wanted to write and cannot remember much). I’ve been known to watch whole movies in their nine-minute increments, too.

Sounds like you’ve got a handle on everything. Can’t wait to read it!

What YouTube did was give me the feel of the battle, the sounds, the smoke and fire.
I must remember to look at YouTube when I want to do other settings too.

Any excuse for a new research book is a good one, I say! 🙂

And I adore YouTube. Anything can be found there! (I recently watched a 5 minute demonstration on making an 18th century ‘pouf’–sadly I do not have nearly enough hair!)

Oh, Diane, I can’t wait to read this series.

I love doing research like this. Nothing else fuels you to write so much as immersing yourself in history!

Incredible research O Divine One, but I expect nothing less from you! I can’t believe you found something on You Tube. Amazing!

I am gradually accumulating a research library and have a number of great books on Waterloo. There is a book outline I have in a monstrous notebook that I will one day turn into a historical romance about an incident in the heat of battle at Waterloo and what it does to a group of friends after they return home. Don’t know when I’ll get it written, but it is something I go back to over and over.

I have been keeping up with Project Huegenot (sp) and I have this plan/dream of traveling to Belgium for the 200th anniversary of Waterloo, IF I am published by then!

I am an Air Force brat, but my Dad was six years Army before he switched to the Air Force. He was in the Army and fought in Korea. I have an interview with him that I taped for a history project. I also interviewed two of my uncles who fought in WWII.

Military strategy was a topic of discussion at the dinner table many nights as before they found I could sing I was supposed to go to West Point. I still find the subject fascinating.

O Doggie One, I, too, want to go to Waterloo for the 200th anniversary! Keep this in mind.

To my father, being in the Army was a job more than a life or a calling. He never talked about anything military, so I learned more about his service in WWII from my uncle than I ever did from him. But we often lived on Army Posts and the army life just soaked into my skin.

This is my personal dilemma with research – how do you stop yourself? I find myself delving so deeply into what I want to research about that I forget to keep it to the topic at hand. I’ve done this for as long as I can remember. A friend of mine thinks this may be why I don’t write historicals. I fear I would get lost in the research and never get to the writing!

Santa,
The pressure of a deadline puts an end to my researching most of the time. When I feel the need to move on, I stop when I feel I have enough to write the scene or enough to solve my plot problem. But I have spent hours on minor things that should never have used up so much time.
I try to tell myself that it doesn’t have to be perfect.

I check on YouTube whenever I want to see a fave love scene for inspiration–it’s way easier than dragging out the DVD and loading it up downstairs. You get the quick snippet, and it’s fresh in your head.

You are amazing with your research, Diane, I look forward to reading this one.