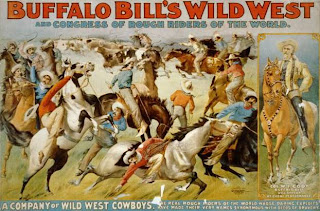 Joseph Campbell, author of The Hero with a Thousand Faces, was born on this day in 1904.

Although he published the book in 1949, his interest in mythology, particularly Native American mythology, was sparked by a visit as a kid to Buffalo Bill’s Wild West Show at Madison Square Garden.

It’s from his work that the concept of the Hero’s Journey derives, something Campbell describes as

A hero ventures forth from the world of common day into a region of supernatural wonder: fabulous forces are there encountered and a decisive victory is won: the hero comes back from this mysterious adventure with the power to bestow boons on his fellow man. 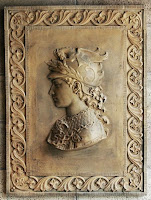 Yes, it sounds like Tolkien, but I love it as a reality check for writing fiction, and one of the few writing books I like is Christopher Vogler’s The Writer’s Journey.

Here are a few more quotes from Campbell I thought you’d enjoy. To my very great amusement, when I followed the link to Campbell quotes, the first thing I read was:

Sensuality Redefined
The New
Push Up
Demi Bra
with an appropriate illustration, before it rearranged itself as an ad at the side of the page. Here are the real Campbell quotes:

Computers are like Old Testament gods; lots of rules and no mercy.Find a place inside where there’s joy, and the joy will burn out the pain.

Love is a friendship set to music.

I’m off fairly soon to the New England Romance Writers Let Your Imagination Take Flight conference, where I’m doing a workshop on servants, signing, hanging out with other writers, and shutting myself away to write.

Pam Rosenthal, who was nominated for a Rita (go Pam!) for The Edge of Impropriety, is having a contest–the prize, a copy of my August 2009 release A Most Lamentable Comedy. Go read an excerpt and enter now!

What are you up to? Reading, writing, nominated for a Golden Heart or Rita? Tell us!

ah! I read parts of ‘The Hero with a Thousand Faces’ for a public speaking assignment (I was discussing Buffy’s Hero Journey and how it could be scene as a metaphor for High School and growing up in general).

I have an odd fixation with Rosa Bonheur, who was fabulously successful in her lifetime but is largely disregarded now. She traveled with The Wild West Show and there was even a Rosa Bonheur doll.

The Wild West show and early American circus history fascinates me and I’m working on a relevant way to incorporate some of those elements into what I’m working on now.

Jane George
who still doesn’t have her computer back but figured out how to log in as me. I’m brilliant, I tell ya.

I am *trying* to write, but lacking motivation. Wah! I wish I were going to NE, too, this weekend, I always have fun there.

I will write soon–and I like reading bits of Joseph Campbell, maybe he will inspire me.

Many congrats to Pam for her (very deserved) nom!!

And I love, love, love Joseph Campbell, ever since we watched “The Power of Myth” series in a college mythology class. His stuff is not always ‘easy’, but it is endlessly fascinating.

Pam Rosenthal, who was nominated for a Rita (go Pam!) for The Edge of Impropriety

And major congrats also to Louisa Cornell, for her Golden Heart nomination!!!

I have long been a follower of Joseph Campbell. I wish PBS would re-broadcast Bill Moyers’ interview with him. Years before I decided to write his words about heroes and their journeys sparked ‘aha’ moments which I kept filed away. I am currently reading Christopher Vogular’s book and it’s been most helpful in my writing.

Have fun at the conference. I hope you accomplish all you set out to do there.

Huge congrats to Pam and to Louisa for their RITA and GH finals!
Whoo hooo!

I’m working on a workshop presenting Michael Hauge’s take on the Character Journey.

Huge woots! to Pam and Louisa!

What fabulous quotes! And wishing I could be at that conference, but at least I’m blessed with the opportunity to participate in Tolkien Reading Day, in L.A., so it will be writing related, so to speak. I’m looking forward to hearing all about the conference after! And CONGRATS to PAM and LOUISA! Well done!
~Judy

but at least I’m blessed with the opportunity to participate in Tolkien Reading Day, in L.A., so it will be writing related, so to speak.

How wonderful for you, Judy. Have a great time.

Thank you all for the congrats and a big WOOT to Pam Rosenthal. Loved The Edge of Impropriety!

I am currently writing my fingers off trying to put the last big of polish on my GH manuscript revisions so that I can start querying it like a maniac. Strike while the iron is hot, so to speak.

I taught a high school English class on the hero’s journey using Campbell’s book and showing films of heroes’ stories from Ulysses to Star Wars. It was one of the last great classes of students I had before I gave up teaching. They were essentially the same group who took my Holocaust class – smart, incisive, and never afraid to ask the hard questions. Needless to say, most of them went on to college.