I thought I’d tell you about the writerly things I’ve been doing over the last couple of weeks; and isn’t it funny how writerly things so often don’t include actually doing any writing? Although I did manage to squeeze some out. I’m so proud of myself.

Weekend before last I attended a writers’ retreat in Gettysburg, sponsored by my local chapter Maryland Romance Writers, led by the wonderful and inspiring Alicia Raisley. 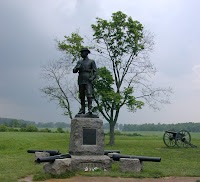 Have you ever been to Gettysburg? It’s a town that was the center of a Civil War war zone, so as you approach or leave the town you drive through open country dotted with monuments; humbling and startling to see the extent of the battle and get an idea of the slaughter. 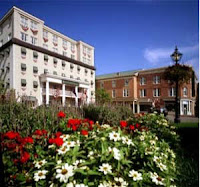 Our retreat was in the historic Gettysburg hotel. It’s haunted of course–everything in Gettysburg is haunted, and no wonder. I didn’t see any ghosts, though some of the other writers took a ghost tour.

I ploughed on through my novella which is to be published in an anthology with Mary Balogh, Susan Krinard and Colleen Gleason. We’re all doing paranormal takes on Jane Austen, and I’m doing Emma as a contemporary; lots of fun.

I finally finished the novella last weekend when I was at the Let Your Imagination Take Flight conference sponsored by New England Romance Writers. It rained all the time (it is mud season!) but I was cheered by meeting up with old friends and making new ones, like Miranda Neville who was a guest at the Riskies recently. And I ate like a pig. There was lots of food. Yum. I gave my servant workshop there, galloping through scads of material in record time.

So now I’m catching up. Taxes (ugh), laundry, books to read, and oh yes, one to write. And in a couple of weeks I’ll be in England, visiting my father and spending a weekend in London with my best friend. More on that later. What are you up to?

Hi Janet. It does sound like you’ve had a lot of writerly fun lately!

I did something fun and writerly a couple of days ago. A local library held a Regency Tea and I spoke along with Amy Corwin, Claudia Dain, Liz Carlyle and Sabrina Jeffries. We had a great time!

Other than that, it’s been squeezing pages in–my kids are on their school break.

But I’m looking forward to BEA–where Diane, Amanda and I get to sign The Diamonds of Welbourne Manor together!

I would imagine the Waterloo battlefield feels the same as Gettysburg…

How I WISH I could have gone to that weekend! It sounds fab.

The New England conference as well! I can’t wait for your anthology! What a marvelous idea that was.

I am actually writing!

Yay! Congrats on finishing the novella, too, btw.

I’ve never been to Gettysburg, but would love to go someday! I’ve also been writing (2 proposals down, 3 to go…), and researching all the Henry VIII anniversary events going on in England this year. I REALLY wish I could go see some of them, especially the Tudor Water Pageant on the Thames this June.

Janet, you HAVE been a busy writer! Right now I am struggling with serious envy of your trip to England! Really looking forward to the anthology!

Can’t make the Henry VIII anniversary but I am definitely shooting for the Waterloo Bicentennial in 2015.

Right now I am furiously revising my GH manuscript so I can start querying next week! Wish me luck!

Thanks for the heads up on the upcoming anthology, Janet. It sounds like it’s going to be great fun.

I am currently trying to put together a Facebook page for my chapter RWA-NY, our store and our charitable foundation. Wish me luck!

I was so excited to see my name in print with an article I wrote for my chapter’s keynotes. It’s a small article but it’s so cool to see my name there, lol. Funny, it’s kind of inspired me in my own writing.

I’ve been to Gettsyburg twice. The first was in high school. I was with my parents and my Army brother, who was then stationed at Fort Dix in NJ.

I remember standing with my dad on Little Round Top and imagining what it would be like to try to attack it. Now, I’m Alabama born and bred (though you’d hardly know it to hear me now), and my great-great-grandfather was a Confederate soldier. So as my dad and I discussed what had happened there, the South was our “we” and the North our “they.” After awhile we stopped talking–it’s the kind of place that breeds silence–and I happened to hear another father-daughter pair with very different accents about ten feet away. And of course their “we” and “they” were the opposite of ours.

When I went back with my husband on a 2002 vacation, I was just beginning to go military history geek, and I understood what had happened and why much better than I had at fifteen. Nothing quite hit me in the gut like the different we/theys from my first trip, though I got a chill standing alongside some of the Union cannon that repulsed Pickett’s Charge and was moved to hear a tour guide read the Gettysburg Address from more or less the same spot Lincoln delivered it from.

The only other battlefield I’ve been to is Culloden. A very haunted-feeling place, even more so than Gettysburg.

Louisa, I’m planning to be there for the Waterloo Bicentennial, too! I’m hoping I’ll be able to take a month, maybe even two, and make sort of a Wellington geek pilgrimage of it–start out in Portugal and Spain, spend some time in France, make sure I’m in Belgium June 15-18, and then head over to England and Ireland for a bit. My daughter will be 11 in 2015–depending on what kind of kid she is at that point in life, she’ll either think it’s the coolest trip ever, or that she has the lamest mom in the world to drag her on such an excursion when she could be at the mall and the beach…

I would also love to be in Belgium in 2015–must start saving my pennies! Maybe we could have an RR meet-up there 🙂

Emma as a contemporary paranormal written by Janet Mullany?