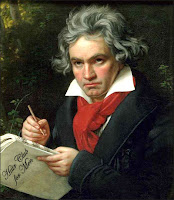 There is probably no single work of art that more personifies the Regency/Romantic period than Beethoven’s Symphony No. 3 in E flat major (Op. 55), better known as the “Eroica” symphony. It displays such a range of high emotion, from the sadness of the main funeral march theme, to the exuberant, hopeful ending. It marks a break from the style of Mozart and Haydn, and a turn in the sensibility of the times. And it had its public premier on this date in 1805, in Vienna’s Theater du Wien, with the composer conducting!

But it’s conception began several years earlier. Around 1799, when Beethoven was in his 20s, he began consulting doctors about the persistent ringing in his ears. In 1801, he was advised to go easy on his hearing for a while and take a little vacation. Beethoven duly trekked off to the village of Heiligenstadt, but the rest, the walks, the composing, didn’t improve his hearing. In despair, he wrote a last will and testament, a document that came to be known as the “Heiligenstadt Testament.” In it he leaves his property to his brothers, but more important it’s a snapshot of his emotional turmoil at the time, fraught with pain and despair. It’s after this that we can see the stylistic shift that results in “Eroica.” 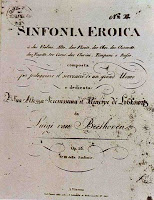 In October, 1802, Beethoven returned to Vienna, where he was engaged by theater owner Emanuel Schikaneder (who was the librettist and producer of Mozart’s Magic Flute) to compose an opera. After a long winter, there was still no opera, and Beethoven went off to Baden. He would spend the summer there and in the countryside, where he would create his new symphony. 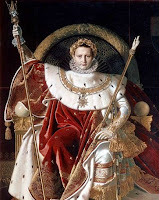 It’s well known that Beethoven originally planned to dedicate the symphony to Napoleon, who seemed to embody the ideals of freedom and high emotion that marked the birth of the French Revolution. But in May 1804, Napoleon proclaimed himself emperor. Beethoven’s assistant, Ferdinand Ries, writes in his memoir, “I was the first to tell him the news that Bonaparte had declared himself emperor, whereupon he broke into a rage and exclaimed ‘So he is no more than a common mortal! Now, too, he will tread underfoot all the rights of man, indulge only his ambition; now he will become a tyrant!’ Beethoven went to the table, seized the title-page, tore it in half and threw it on the floor. The page had to be re-copied and it was only now that it received the title ‘Sinfonia eroica’.”

In the end, the symphony was dedicated to Beethoven’s patron Prince Lobkowitz, and it had its first, private performance at the prince’s castle of Eisenberg in Bohemia. The public premier followed a few months later. 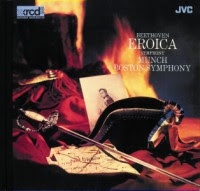 The critics were, er, divided in their opinions. The Allgemeine Musikalische Zeitung said, “a daring, wild fantasia of inordinate length and extreme difficulty of execution. There is no lack of striking and beautiful passages in which the force and talent of the author are obvious; but on the other hand the work seems often to lose itself in utter confusion. In the present work he (the reviewer) finds much that is odd and harsh, enormously increasing the difficulty of comprehending the music, and obscuring its unity almost entirely.”

Der Freimuthige said, “One party contend that this particular symphony is a masterpiece, that this is exactly the true style for music of the highest type and that if it does not please now it is because the public is not sufficiently cultivated in the arts to comprehend these higher spheres of beauty, but after a couple of thousand years its effect will not be lessened. The other party absolutely denies any artistic merit to this work. Neither beauty, true sublimity nor power have anywhere been achieved. For the audience the Symphony was too difficult, too long and B. himself too rude, for he did not deign to give even a nod to the applauding part of the audience. Perhaps he did not find the applause sufficiently enthusiastic.” 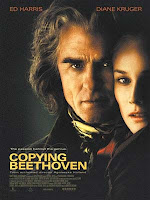 After the first few performances, the symphony was only heard 3 more times in Vienna during Beethoven’s lifetime. Now, of course, it’s considered a work of genius and enormous beauty.

(For more of Ries’s biography of Beethoven, see the 1987 translation from Great Ocean Publishers, Beethoven Remembered)

What is your favorite work by Beethoven? Any artistic creations (paintings, books, music) that you think say “Regency Period”? Have you seen any good movies about Beethoven (somehow, there just don’t seem to be any to compare with Mozart and Amadeus…)?

Count me as a fan of the Eroica Symphony and the Fifth. A piece that always calms me down is Fuer Elise. But the one that chokes me up and brings tears to my eyes every time is the Ninth, particularly once the choir joins in. Oh, those voices in that glorious last movement. Now imagine them in a huge ancient cathedral. Mein Gott.

It was very nice! A touring Russian company, and lots of little girls in Cinderella costumes dancing in the aisles at intermission. Miss Wee would have enjoyed it 🙂

The UK newspaper The Guardian (affectionately known as The Grauniad after it got a typo on its own masthead during industrial disputes of the Thatcher era) once listed it as the Erotica Symphony.

I’m with you on the Ninth, Keira. I have a wonderful recording with Norrington and the Orchestra of the Enlightenment. I also like many of the piano sonatas.

I actually loved ‘Immortal Beloved’, saw it 3x in the theatre. Don’t know why it wasn’t more popular. The scene showing his childhood inspiration for the ‘ode to joy’ was very moving and beautiful.

I’m with M, I really enjoy Immortal Beloved–but then I’m a fan of Gary Oldman and found his portrait of a tormented, broken Beethoven incredibly powerful.

Anything by Beethoven is divine to me. His piano concertos are masterpieces and my pianist friends say they are the most difficult and most rewarding to play.

The Eroica is amazing. The Fifth is magnificent and the Ninth is music that defies description. And Keira I have heard and have sung the Ninth in a couple of huge old cathedrals. There is nothing like it and few musicians can get through it without tears. What devotion and inspiration and sheer desire did it take to craft this wonderful, joyful piece when the very sense necessary to enjoy it had been taken away.

I too liked Immortal Beloved. I thought Gary Oldman did an great job of portraying this tortured giant.

Beethoven was also the first major composer to break away from the patronage system and to treat nobility with something less than the toadying they expected!

I love the Fifth — it’s so grand and beautiful and humorous.

I too adore Immortal Beloved. The costumes and setting are magnificent as is the acting…. However I don’t think it compares to the Oscar giant Amadeus. When I want depth of soul and emotion, Beethoven in just about any form is the man for me.

It’s been a long time since I saw “Immortal Beloved”–think I may have to add it to the Netflix list (which is now over a hundred movies, eeek!)

Another here who hasn’t seen Immortal Beloved, or even Amadeus. . . and I’m so limited on my knowledge of Beethoven, or Mozart, or Bach for that matter, that I have no idea if I even heard of this. I imagine I probably have heard it zillions of times, just never knew titles or to place what where. Just like listening to classical and instrumental, just don’t really study it. LOL 🙂

I was a poor graduate student singing in my first choir. Immortal Beloved was the one movie I saw that year. We walked five miles to and fro the theater in cold, snowy Wisconsin. I have never forgotten that movie. Those scenes where Beethoven finally realizes he’s going deaf are heart-rending. He wrote the Ninth when he could hear absolutely nothing. Even typing this is raising goosebumbs on my skin. What agony. And how perfect the orchestra and choir in his mind must be; far better than any human ones could be.

Louisa, it makes me very happy to imagine you singing it in those ancient places you did.

Ammanda, dancing in the aisles. Ohhh, that must’ve been precious!

Keira, I love Fuer Elise, too.

I used Eroica in A Reputable Rake (I think..might have been The Wagering Widow) The heroine was greatly affected by hearing Beethoven for the first time.

But, Lois, I’m like you. I listen to Classical almost exclusively and I never know who I’m listening to.

“Ammanda, dancing in the aisles. Ohhh, that must’ve been precious!”

It was sooooo cute! And one of them had some adorable blue satin shoes I want to find a pair of, too…

Okay, I’ve put “Immortal Beloved” on my Netflix list, but it’s pretty far down (after all the MI-5 episodes, thanks to Keira and Megan!). I may need to move it up.

But you do have adorable blue satin shoes. From last year’s soiree…