Mad as a March Hare Pie

Today is Easter Monday and in addition to egg rolling, all sorts of festivities are taking place in the UK, where Easter Monday is a Banking Holiday.

At Hallaton in Leicestershire, the annual Hare Pie Scramble and Bottle Kicking match is held, although the pie is made of beef and the bottles are tiny wooden kegs like the “plough-bottles” field workers once used to hold their daily ration of ale or cider.

There are varying accounts as to the origin of this custom. Some accounts say it began as a pre-Christian Celtic ritual; some say it originated in the Middle Ages. One legend has it originating in 1770, putting it close enough to “our” time period. On Easter Monday, the Lady of the Manor was crossing a field and was charged by a raging bull. She was saved when a hare ran across the bull’s path. Because her life was saved, a piece of land was given to the rector (how that follows, who knows?) on the condition that every Easter Monday thereafter he cook two hare pies, bake a dozen loafs of bread, and provide three kegs of ale, all to be given to the needy, who presumably “scrambled” for their share. Nice way to thank that brave little hare, cooking its descendents into pies… 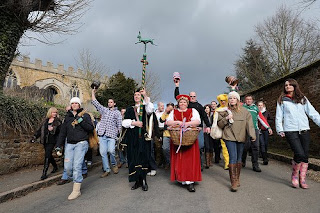 Today in Hallaton, a parade will begin at the Fox Inn and end at St. Michael’s Church. A man carrying a pole with the symbol of a hare leads the parade, followed by a woman carrying the bread in a basket, two women carrying the pie, and three men holding the kegs of ale over their heads.

At the end of the parade, the pieces of pie are thrown in the air and the crowd scrambles for them. The bread is blessed before being thrown to the crowd. 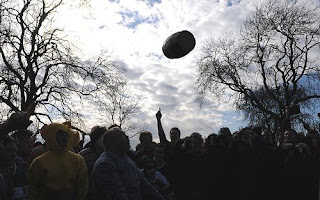 After the scramble the crowd proceeds to a field where a contest begins between Hallaton and neighboring Medbourne, to see which team can get all three ale barrels to a touchline in their repective villages. The contest takes the teams over hills, through hedges, across a stream. Every year some people are injured.

At the end everybody drinks the ale…

Here in the Washington DC area Easter Monday means the Easter Egg hunt at the White House. I’ve never attended the White House event but I did take my then 3 year old daughter to an Easter egg hunt once.

Come to think of it, it was a lot like Hallaton’s Hare Pie Scramble…

Photographs are courtesy of http://www.ourmaninside.com/, “Documentally” on Twitter. Thank you, Documentally!

Don’t forget, you can order The Diamonds of Welbourne Manor from eHarlequin right now and receive it before it hits bookstores. The Unlacing of Miss Leigh is instantly available from eHarlequin and other ebook vendors.

Visit my website and enter my contest for a chance to win Scandalizing the Ton.

I have to agree about the questionable honor to the hare. 🙂

For Easter, I’ve been eating off of my “Easter Egg” dishes (shaped and decorated like Easter Eggs). I figured today, Easter Monday, would be my last day to use them until next year.

I love the idea of you eating off of Easter egg dishes! How fun.

I had a very quiet day yesterday Easter Monday here in Australia eating easter eggs and lots of chocolate. Here in Sydney we have the Royal Easter Show on where the Country comes to the City lots of animals rides showbags but I am back to work today but still on a high from the chocolate.
Loved the post.
Have Fun
Helen

**At the end everybody drinks the ale…**

Perhaps we should suggest this to Obama for next year’s White House egg roll, no?

LOL! Every Easter egg hunt should end with ale. 🙂

That poor hare, though. I bet he was sorry he bothered saving that woman…

I saw clips of the White House Egg Hunt. Not quite as raucous as the Hare Pie Scramble. I don’t know about anyone else, but the President seemed to be having fun!

Helen,
I’d never heard of the Royal Easter Show so I looked it up. Wow, it’s huge!

I wonder if the Obamas are going to attempt to celebrate at least one of the major festivals of the representative religions of our country.

I saw news reports that some people were doing yoga on the WH lawn. Crazy!

I had some good beer over the weekend, but then, I always do.