Movies of the Past and Future

So, last weekend was a busy one. I had proposals to write and revisions to tackle. And, since I am crazy, I helped a friend supervise her 11-year-old’s slumber party on Friday. When I was a kid, I never understood when people would sigh and say, “Oh, I wish I had energy like that!” Now I totally do. There was running, shrieking, trampoline-jumping, gossiping (MUCH gossiping), lipstick-trying, Wii-playing. And, when my friend and I needed quiet, there was Twilight DVD watching. The whole movie, then rewatching various scenes. It’s a hard job to gawk at Robert Pattinson for hours, but I am a good friend and did it for the kids. Uh-huh.

Then Sunday, there was Easter candy-eating, family-visiting, and one of my dogs eating purloined boiled egg yolks and getting sick at my parents’ house. No wonder Sunday night I felt a bit under the weather. So I took a break, and had a “lie on the couch watching weird movies only Amanda would like” evening. I ended up with a French movie I just got from Netflix, Eric Rohmer’s newest (and last, according the 88-year-old director), The Romance of Astrea and Celadon. One of the reviews I found online said “You’ve got to ride with this movie the whole way, or give it a pass.” Which is so true–I just let it carry me where it would, and it turned into a lovely, weird, eccentric, baffling, charming ride. 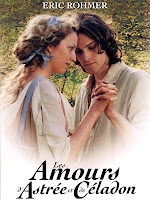 Astrea and Celadon is from a romance by 17th century French aristocrat/writer Honore d’Urfe, and is very much in the pastoral As You Like It vein, set in a 17th century French idea of 5th century pastoral Gaul. It’s very Renaissance-y in its storytelling. The plot (such as it is) concerns the impossibly beautiful shepherd Celadon and his lover, the impossibly beautiful shepherdess Astrea (almost everyone in this movie is impossibly beautiful, and they never herd sheep. In fact, I never saw a sheep the whole film). Early on they quarrel because A. thinks C. kisses another girl. She won’t listen to his explanations, forbids him to be in her sight, and he goes off to drown himself. A. discovers she was wrong, it’s too late, there’s much weeping.

There is a lot of talk about the nature of love, a little light proto-Christian theology, some Ren-faire style musical numbers, C. disguising himself as a woman (twice!), and lots of gorgeous, sunny scenery.

Anyway, my point (besides the fact that if you love oddball French movies, as I do, you should give this one a try) is this. That review also said, “If there had been movies 400 years ago…this is pretty much what they’d have looked like.” I found that a fascinating thought. Sure, it might not have been a movie to play well with the groundlings–there’s no blood or gore at all, and not a funny “bit with a dog” (though there are a few moments of semi-bawdy goofiness and some brief nudity). But I could see courtier-poets going crazy for it, debating its philosophical points about the Nature of Love. 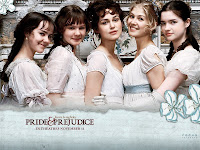 What would a Regency movie have looked like? Like one of the Pride and Prejudice movies, or something else? What about a Georgian or Medieval movie? What do you think? (And have you seen any good movies lately??)

I’ll tell you what I think would NOT be a medieval movie: Braveheart, no matter how good Mel Gibson’s calves may look.

I would think Shakespeare would be a tad naughty of a Regency movie.

What I like about French movies is that they’re always a tad off the straight and narrow as defined by Disney and Hollywood. Always something unexpected, turning ordinary notions on their heads. My best films (Un Pur Formalite) and worst films (Umbrellas of Cherbourg) are both French.

“What I like about French movies is that they’re always a tad off the straight and narrow as defined by Disney and Hollywood. Always something unexpected”

I think this is very true, Keira! And probably why I’m always disappointed when Hollywood remakes a European movie or TV show–it usually turns into something plastic and predictable, and takes away what was so great in the original in the first place. (I rad somewhere that Hollywood was remaking the Swedish movie “Let the Right One In,” which is so totally weird and unneccesary–the original was pretty darn near perfect!)

Uh-huh! Or Dances With Wolves. So period-appropriate.

Ohhhhhhh. You’re the first one I’ve met who has mentioned “Let the Right One In.” It’s so good.

One of my fave trilogies is Red, White, Blue with the musical Blue in the tops.

Yikes, back to French class with me.
But contrast that film with Disney’s, which is fun in its own way but is in no way transporting like Cocteau’s film. Hmmm, back to English class too…

“Ohhhhhhh. You’re the first one I’ve met who has mentioned “Let the Right One In.” It’s so good.’

I thought it was terrific, and went around telling everyone to go see it! (though I’ve heard the DVD has very stupid, poorly translated subtitled). I see no need to remake it whatsoever!!

It was a much better vampire movie than “Twilight,” though it seems wrong to compare them–they are so very different, and made for different purposes, I think

Jane, this is one of my favorite movies of all time! Gorgeous, gorgeous.

Have you seen “Les enfants du paradis”? Another big favorite of mine

I could happily live in Cocteau’s fantasy world.

**Have you seen “Les enfants du paradis”? Another big favorite of mine.**

Oui. 🙂 And Jean-Louis Barrault goes on the hero-hotties of all time list!

I think movies in the past would have been a lot slower, and more nuanced. Kind of like what you describe.

I have Let The Right One In on my Netflix queue!

That’s my goal, Megan–to make everyone’s Netflix queue as unwieldy as mine 🙂

Jeez, I feel like such a dodo. Maybe I ought to turn off repeats of Clean House and watch French Movies!!

I haven’t seen any of these!

I do remember from my youth just LOVING A Man and A Woman.

I tell people if they want to read a wonderful YA vampire book they should read “The Silver Kiss” by Annette Curtis Klause and if they want to see a wonderful vampire movie they should see “Let the Right One In”. The Twilight book/film were fun in their own way (Robert Pattison is stunningly beautiful), but Twilight is ginger ale compared to the champagne of the Klause book and Swedish film.