A quick note–I’m out of town this week, at a yoga retreat in the middle-of-the-mountains, New Mexico. I’m hoping to recharge my creativity, work on revisions for Irish Book One (and tone my abs while I’m at it!), but Internet access there is iffy. I’ll try and stop by this evening! And don’t forget–yesterday was Hottie Monday on my own blog (here), where I share my latest obsessions (I’m afraid I’m not faithful, as Diane is to Gerard!). This feature has cheered my Mondays to no end, so I’d like to keep going with it! But I need some hottie suggestions–who would you like to see there next? (I think I could also do historical hottie Mondays–Wellington, Byron, etc…)

And now to the main feature of the day! Catherine the Great, who was born on this day in 1729. I’ve always been fascinated by her. How did a young princess from a tiny German principality, bullied by her crazy husband and overbearing aunt-in-law, ever find the chutzpah to take over a whole country, and rule it for decades? And do it entirely on her own terms? (I also love the story of how noble families wanting to get ahead would spend fortunes dressing up their handsome young sons in hopes they’d catch Catherine’s eye! You hear that all the time with kings–Henry VIII, Louis XV–not so much with queens). 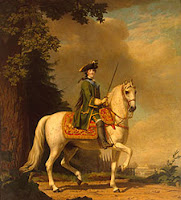 Catherine was born Sophia Augusta Frederica to the Prince of Anhalt-Zerbst and his ambitious wife, Johanna Elisabeth of Holstein-Gottorp (no wonder there aren’t many German-set romances–all those hyphenated names to remember!). Empress Elizabeth of Russia, wanting to strengthen Russia-Prussia ties against Austria (and who had once almost married Johanna’s brother, before he died of smallpox) arranged the marriage with her nephew and heir Peter. Sophie wed him at the age of 16, and the young couple went to live at the palace of Oranienbaum.

The marriage was not a success. Peter was, er, a bit odd, preferring to play with toy soldiers and set up fake battles (and cavort with unattractive mistresses) than spend time with his young wife. Not that Catherine minded–she made her own friends, read extensively, kept up-to-date on current events and politics, and bided her time.

That time came after Elizabeth’s death in January 1762. Peter was a predictably bad tsar, and lost the support of the nobility after an ill-advised alliance with Frederick II of Prussia, right after the end of the Seven Years War (where Prussia was the enemy). In July 1762, Peter retired back to Oranienbaum with his favorite German-born courtiers, leaving his wife in St. Petersburg. On July 13-14, the elite Leib Guard revolted, deposing Peter and proclaiming Catherine the ruler of Russia. (didn’t hurt that her current lover, Grigori Orlov, and his brothers belonged to the Guard). 3 days later, Peter died, reportedly at the hands of one of the Orlov brothers.

Catherine, although not descended from any Russian tsar, succeeded her husband as Empress. At first, some thought she should serve only as Regent for her infant son, Paul (and there was a fledgling coup to that end in 1770, quickly squashed). But Catherine reigned until her death. 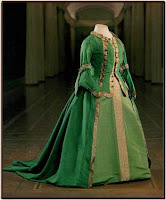 This post could be pages long, of course! We could talk about foreign relations (Catherine expanded Russia’s borders considerably during her reign, and set up a powerful Northern League of Russia, Prussia, Poland, and Sweden to balance the Bourbon-Habsburg League, among many other things). Wars, relations with Western Europe (she served as a sort of international mediator in foreign wars), the partition of Poland (when she put one of her former lovers on the Polish throne), and her reputation for being a champion of art and culture. The Hermitage Museum began as her personal collection. She wrote a manual for the education of young children (along with comedies, fiction, and memoirs), founded the Smolny Institute for young ladies, and corresponded with Voltaire, Diderot, and Alembert (among many others).

And there was her personal life. She was well-known for taking many lovers, often elevating them to high position as long as they held her interest, and then pensioning them off with gifts and estates. Some were men of great intelligence and political savvy who helped her in her work; some merely boy toys. She was never one to deny that, when it comes to romance, it’s good to be the queen.

She died after suffering a stroke on November 16, 1796 (not, as oft-repeated, after a failed attempt at intercourse with a horse!)

Happy Birthday, Catherine! Who are some of your favorite historical heroines? Any Hottie Monday suggestions???

I love Catherine the Great. . . although it’s probably only because of a movie I saw in the very early 90s on TNT, Young Catherine with Julia Ormond as Catherine, Vanessa Redgrave as Elizabeth (loved her Elizabeth!), and favorite Christopher Plummer as the British Ambassador, her confidant. It took you from Princess Sofie to the last scene, her coronation. Probably totally incorrect, probably makes her vastly more honorable that she was in real life, but hey, at the time, I was barely 12, 13 and didn’t care. LOL So I probably have some sort of lifelong bias to how I look at the real her, but since I’m not any Russian Scholar or anything, I don’t mind. 😉 Only thing is, I have her birthday as May 2nd. . . so I’m totally confused now. LOL 🙂

Amanda, I remember reading a bio of Catherine the Great when I was young, and like you, being fascinated. How horrible must it have been to be that smart and ambitious married to a guy who liked to play with soldiers. Of course, he got what she probably thought he deserved.

As for Hottie Monday, hm–you know my faves. I like the idea of Historical Hotties, but Wellington? Not so much. Byron was smokin’, however, and I’d be interested to see some of the famous actors then. Keane, right, was one?

Have a great time at the retreat!

I think Amanda’s Retreat sounds more Retreat-like than mine.

Lois, Maybe Amanda is shopping ahead of time for a present for Catherine.

Hotties? Well, who else can you have but Gerard? For a historical hottie, put in a photo of Gerard as Leonidas or as Attila. Or both.

You are ever faithful, are you not, O Divine One?

How about Clive Owen as King Arthur and Ioan Griffith as Lancelot?

Ioan Griffith as just about anyone, in fact!

Jane Austen is one of my favorite historical heroines. She may not have changed a nation, but I think she changed the literary world forever and I, for one, am eternally grateful!

I wrote about Catherine and her love affair with Potemkin for Valentine’s Day! I watched a fascinating docudrama on her on PBS and I’ve also seen at least two TV movies on her, one with Catherine Zeta Jones and one with Julia Ormond. Plus Marlene Dietrich also played her in a movie from the 30’s. It’s worth watching if only for the crazy costumes. Love how all these actresses are so much prettier than the real woman.

Greetings from the mountains! No computer access (or even cell phone) but I got them to let me use their office ‘puter. 🙂

I remember that TV movie with Julia Ormond! Gorgeous costumes. It IS funny how the actresses who play these women are always taller, thinner, and much more beautiful than the real women probably were 🙂

Using the office computer on a yoga retreat?

How did that horse thing ever gain traction?

I love Russian History. Wish I’d taken a course on it from the estimable Professor Herlihy when I had a chance. History is so much more fun when you know the details, don’t you think?

(For instance, Peter the Great enjoyed doing dental work for his courtiers. No thank you!)