I’m ba-a-a-ck! And, wonder of wonders, I did take a camera, I did figure out how to use it, and I have downloaded some extremely bad pictures of London and Brighton. I have a very few pictures of Greenwich up at Twitter. 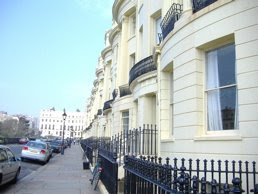 I went to Brighton on Tuesday to visit the Regency Town House in the company of Eileen Hathaway (isn’t that a great name?), who is an English writer, with her family entourage, a group of design students from the University of Brighton, and some historians–a nice mixed bag. The house, 13 Brunswick Square, is being meticulously restored to the time it was built, the mid 1820s, as part of a brilliant and supermodern development by architect Charles Augustin Busby (who interestingly enough spent some time in New York). His plans not only included housing for “support” industry workers involved in the upkeep of the luxurious lifestyle of the Square’s occupants, but also featured piped in water and gas. 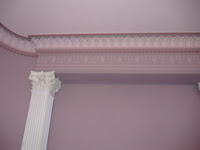 Here’s a detail of the restoration work on the dining room, on the first (ground if you’re English) floor of the house. Isn’t it a great color scheme (and if you blow it up you can see the gorgeous plaster work)? I was pleasantly surprised at how nice and girly it was, very unlike the usual bright blues and greens and yellows favored by Regency interior designers. We have Goethe to thank, who developed a color theory that specified purple as being good for the digestion and therefore a popular dining room color. 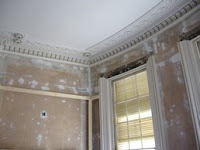 The second floor of the house consists of a pair of linked drawing rooms that were used, of course, for entertaining–the “open house” style of entertainment meant that several hundred guests would be visiting the house in one evening. Analysis reveals that the wall decoration consisted of painted panels in a neoclassical style and it’s possible to see where pictures hung on the wall (research is being done to see what sort of pictures the inhabitants hung). So the task at the moment for the museum is to decide whether to restore the painted panels or choose wallpaper (I vote for the painted panels). The wood frame on the walls, by the way, is for an art exhibit at the house. 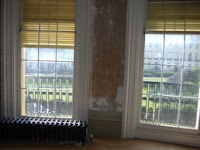 Here’s the view out of the window, looking out over Brunswick Square. The blinds are exterior storm blinds, because 1820s glass was fragile enough to be broken by hail. It’s the only house in Brighton to possess a complete set of storm blinds.

I was also very excited to see the servants’ quarters–actually an belonging to the house at No. 10, and in my excitement thought I was taking photos when in fact I wasn’t… or lacked impatience for the flash to recharge. 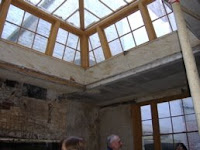 Here’s the restored kitchen skylight, which not only brought much needed light into the kitchen but also provided ventilation. The gent in the center is the museum’s highly erudite and learned curator, Nick Tyson, who claims that the kitchen was as brilliantly designed and equipped as its big brother kitchen up the road at the Royal Pavilion (which I also visited that day).

And one interesting factoid: the houses of Brighton were not designed to be a glaring pale yellow (this was a good idea adopted by the local government). The stone is actually the same used on the sidewalk, in soft shades of grays and beige, and the ironwork was painted a dark green, to give the idea of the beauties of nature brought into the sophistication of the town. 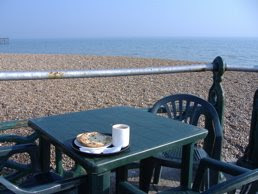 Altogether a wonderful and satisfying day, and what better way to end it than with a sea view, a toasted teacake and a nice cup of tea in the sun? And yes, the weather was glorious as you can see.

What have you been up to this week?

I figured out how to get on Facebook !! And I’ve been pounding on the revisions, as usual. Getting SO close to finishing those! This weekend for sure.

And right now I am sitting here GREEN GREEN GREEN with envy over your trip, Janet ! Great photos and fascinating stuff!

Oh, Janet! Amanda and I saw the Regency Townhouse in 2003 when its restoration was not so advanced. It looks wonderful.

Glad you are back safe and sound.

What a wonderful adventure, Janet, and thank you so much for sharing it! A lovely break – mini vacation – from work, work, and more work. 🙂

Color me as green with envy as the trim and railings. I would sooooo love to be touring Britain, esp on such a marvelous day!

Thanks for the detailed report!

Dear Janet,
This is my first time on this site, and what a wonderful surprise to see your photo’s. I wish there were more.

Whoa, those pix are gorgeous. And thank goodness for Goethe!

That color paint in the dining room is gorgeous! And thanks for the shot out the window. Somehow it’s easier to imagine the inhabitants when you can ponder along.

I really must go to Brighton someday. My wee American psyche is torn between Jane Austen/Regency and Mods/Rockers. 🙂

And now I want a purple dining room! 🙂

It was a great trip and I wish I’d been there longer. Welcome to the Riskies, Anonymous, I hope you’ll visit often.
Cara, I want that particular purple dining room and the lovely plaster work and the original black marble fireplace (still in situ, altho my photo made it look horrible so I didn’t post it)

I just “squeeed” over a dining room!

Squeeeing right with you, Jane George! That dining room alone would be worth the trip!

My husband and are watching a PBS program on the War of 1812 and recalling our visit last year to Fort Ticonderoga in upstate New York. We both felt as we walked around the fort and looked over to Lake Champlain that we were steeped in history. I imagine it’s the same thing walking through Regency House’s beautiful dining room and kitchen.

I’m so glad you remembered your camera!

Wonderful pix. And observations. Piped in water! Light for the servants! Yay!

Loved the article. It was just great!