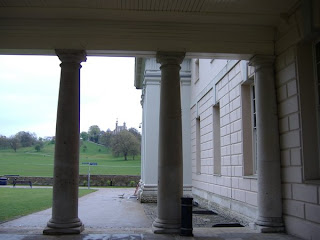 I’m still talking about my trip–I blogged last week about visiting the Regency Town House in Brighton, but while I was in England I made two trips to London. On one, I took a guided tour of Mayfair, and blog about it today at the History Hoydens.

I also took a trip to Greenwich, traveling there on the river and it was freezing, but well worth it. For one, you really get an idea of how huge London is, and how impressive the Thames is, with its wonderful meandering curves. You travel past a lot of reclaimed and tarted up wharves (now owned by people who are probably deeply regretting the investment), and past the London Eye, the Globe and the replica of the Golden Hind.

And Greenwich itself is amazing. I visited the National Maritime Museum where you can see the coat Nelson wore when he died and the barge King George I rode in when Handel’s Water Music was performed. 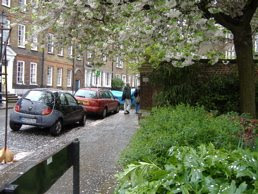 But it was outside the Park that I discovered what has to be one of my favorite museums, the Fan Museum. Check out their site because it has some really wonderful images and information. The museum is in a gorgeous, impeccably restored Georgian house on a pretty, quiet street–quiet for London, that is! This isn’t actually a photo of the museum but of the street itself, and everything was green and lovely because it was raining. The houses are quite small and would probably have been occupied by merchants or retired Naval officers (I like to house mistresses in Greenwich but I’m not sure why). 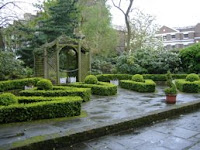 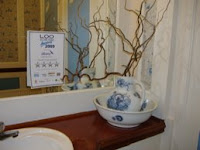 It also has an award-winning bathroom and a lovely garden. Yes, the English give out awards for Best Loos, and it was really splendid. As were the contents of the museum and the wonderful, knowledgeable staff. One of the things I found fascinating about the fan industry was that women were featured very strongly in fan manufacturing. Another is that the Worshipful Company of Fan Makers, the guild established in 1709 and which sounds straight out of Terry Pratchett, is still going strong and has made a flawless transition into modern times with the adoption of air-conditioning, aviation, and aerospace industries. No kidding.

You can also see some great pictures of fans at Candice Hern’s fabulous collection. 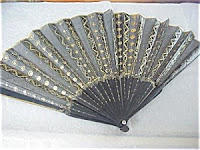 If you fancy owning a fan yourself, here’s a gorgeous Regency one, with its original box, for sale at The Cupid and the Swan.

And, oh yes, the so-called secret language of the fan … well, if everyone can decipher it, it’s not much of a secret, is it? The staff of the museum assured me it was purely a Victorian marketing ploy. 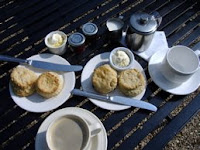 And now for my big news: I have sold a two-book deal, Immortal Jane, to HarperCollins. The first one, coming out next summer, is about Jane Austen joining forces with sexy vampires to save the city of Bath from the dastardly French. My working title, which I hope I can keep, is Blood Bath (groan). Oh yes, I’m gonna have fun with this. I’m excited! I am, in fact, fanning myself even as I write… it’s almost as good as a cream tea (my brother had the coffee. For some reason, cream coffee just doesn’t sound as good).

Have you had any writing successes or read or eaten anything good recently?

Wheeee!
Big congrats on your sales and HAVE FUN WRITING. I’m so happy for you.

I’d love to see that area by punting on the Thames. It’s been used in so many books I’ve read, from Dick Francis to Jo Beverley.

My current success is in the form of 3 agents and 1 editor currently reading the full ms of my YA. Cross fingers!

Janet! How exciting! I am thrilled for you, and can just imagine how you howled when you were writing the proposal.

And Jane George, what awesome news! That is just fantastic.

Major congrats, Janet!!! JA has certainly been kicking a tremendous amount of paranormal butt lately. 🙂 Can’t wait to read it. (and am putting the Fan Museum on my list of must-see places)

And congrats to Jane, too!!

They better keep the title — that’s classic! And knowing you, there may be sexy vampires and blood, but it’ll still be funny 🙂

The tea is on me at National!

Congratulations Janet on the book deal, and thanks for the heads up
about the fan museum. I had no idea that they had one in the UK. A must see on my next trip.

I usually have reservations when poor Jane is inserted into current lit, but I will make an exception in this case—it sounds like an absolute blast and I LOVE the title! Congratulations, Janet!

Hurrah on the fab contract, Janet!!!!

More places to visit in London! Thanks, Janet.

And super congrats about Blood Bath. What fun for you!!!

Jane, my fingers, toes and eyes are crossed for you to get THE CALL.

Zombies and vampires and (who’s next?), oh my! It’s utterly astonishing how much creativity is unleashed around the person of Ms. Austen. Congratulations!

Janet–so exciting!! Congrats, and I love the title. It’s a scream. 🙂

Maggie, I’m inclined to agree with you. My approach was to make it as over the top as possible–it’s fantasy and it should be fun.

Major congrats on the new contract, Janet–sounds like you’ll be having fun writing it!

Thanks too for the description of the fan museum. Greenwich is definitely on the list for the next trip to London (esp after our recent to-and-from-work audio binge on Patrick O’Brien’s Jack Aubrey books) and the fan museum sounds like a fab counter to all that naval testosterone.

Good luck to you, Jane, as you await The Call!

Thanks for the well-wishes, everyone. And Diane, I saw Dear Frankie last night. A sweet movie starring Gerard Butler as a mysterious stranger!

Congrats to Janet !! Sounds like a hoot! And what a great little museum. Definitely checking that one out.

Jane, how exciting! Keeping all appendages crossed for you!

Great article. I love that place!