Mothers In All Shapes And Sizes

Hope everyone had a great mother’s day. I was in Williamsburg where my in laws live (and where Deb, Amanda and I met to plan The Diamonds of Welbourne Manor). I didn’t even glimpse Colonial Williamsburg this time but my mother-in-law and I did make a quick trip to the Prime Outlets and I bought some clothes for the New York trip later this month when Deb, Amanda, and I will be signing TDWM at Book Expo America – Saturday May 30 at 3 pm.

My big To Do List isn’t whittled down nearly enough, so I’m not too happy about sleeping late and sending my Risky Regencies blog so late.

I’m steeped in the Battle of Waterloo for the wip. My hero’s regiment is The Royal Scots and in my research I came across this snippet, first appearing in The Thistle in 1895 but found here in the history pages of the Royal Scots: 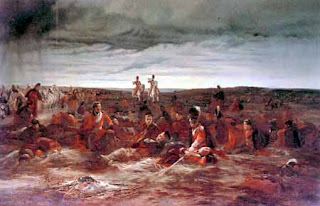 Donald Crawford was rescued on the field of Waterloo while nestling as a child in the bosom of his mother who was killed in action. It may be asked what she was doing there, but the poor woman knew of nowhere else to go, and naturally followed the regiment in whose ranks her husband fought and fell on the same day as her.

Fortunately for wee Donald he was seen by a private who was fighting in the ranks and picked him up out of his inanimate mother’s arms, laying him lengthways across his back on the top of his knapsack lodged between his rolled greatcoat and the nape of his neck, and immediately resumed his place in the front rank of the fighting line, where the little boy was as happy as a sand boy.

I regret, at the distance of time, I cannot recall the good man’s name…”

Donald revered the man’s memory with all the affection of a son for his father, and was brought up in the regiment by his guardian, and later attained the rank of Sergeant. 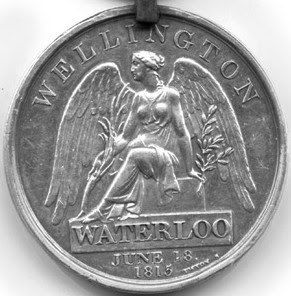 “The incident of his having been picked up on the field of Waterloo, having been brought to the notice of the Duke of Wellington, he ordered him to be granted the Waterloo Medal… as he was under fire during the whole three day engagement.

He wore the medal on his left breast, until he was discharged to pension in the year 1851, at Halifax, Nova Scotia, where he elected to settle, like so many other time-expired men of his regiment, most of whom did well in colonial life – the child of Waterloo.

Who besides your own mother provided a mothering role for you at least once in your life?

Here‘s a fun thing. A Riskie blog of mine was reprinted in a bilingual magazine Yareah, issue 7. Look at page 21. Check out my website for more news, reviews, and my contest.

Look for Amanda, Deb, and me at Word Wenches May 15.

Oh, and look here! Scandalizing the Ton and The Vanishing Viscountess are both finalists in the Desert Rose Golden Quill contest (Deb’s An Improper Aristocrat is there, too!)

I just bought the Vanishing Vicountess for my Kindle and am having the strangest sense of deja vu. I haven’t read it before, but seven years ago I was on a ship from Holyhead to Dublin and the storm we went through was so bad it damaged the ship and it took six months to fix it. I know exactly what everyone is going through. Ha!

What a wonderful example of motherly love! 😀

In my case, it was my stepfather, who married a woman with FIVE children and loved us, and our children, as deeply as our mother did.

I would have to say my undergraduate advisor who I call DW. She really helped me at a time when I was a wee bit lost. She’s still around for me today even though I graduated seven years ago. It is my desire to one day do for someone what DW did for me.

My grandmother totally substituted my too- busy- working mother in my childhood and teenage. She’s still alive, 96!, and I owe to her what I’ve become. My mother, though, has been a wonderful granny to my sons! She IS also a wonderful mother now she’s retired.
My ToDoList? I feel breathless, drowning in a sea of papers!By the way, I’ll go back to my tests to be corrected!

What a remarkable history! It is testament to the saying “Truth is stranger than fiction because fiction has to be believable.” Simply amazing. Thanks for sharing it, Diane!

I have a few dear friends who have mothered me, from time to time. God bless them.

seven years ago I was on a ship from Holyhead to Dublin and the storm we went through was so bad it damaged the ship and it took six months to fix it.

Wow, then I maybe did get it right? That was such a hard book because I had to research so many setting details. Note to self: No more road stories!

and, Jane Austen, that’s exactly what I meant. We all have someone in our lives who “mothered” us when we needed it–or I hope we all have that!

Judy, I’ll bet one of those mothering friends is named Mary! I gotta love her, too.

Obviously we didn’t crash and the boat was different…ours was sort of like a cruise ship because it had to have space for cars, but the weather was awful. I believe the Irish Sea often gets horrible galls and storms that just seem to pop up. What was suppose to be a 1 hour trip turned into a 6 hour trip and we basically limped to shore. When we left Ireland we had to take the four hour boat to Southern Wales because the ferry to Holyhead was out of commission as I said. The experience really made me not want to travel by boat ever again. I did not vomit, but I thought about it.

What a wonderful story

I never knew either of my grandmothers, but my aunt played an important mothering role. She lived with us growing up and was the “career” woman, the “daring” one, where my mother was more shy. My Aunt Loraine taught me not to be afraid to do things. And to have fun.

Congratulations O Divine One and Amanda on your Golden Quill nominations! They are showing exceptionally good taste this year, aren’t they? 🙂

My vocal coach in grad school and throughout my career was Dr. Vivian Lee Poates Wood and she was the “mother” of my music career. She really mentored me and taught me to believe in my voice. She was a truly amazing woman and a very dear friend to me.

My writing “Mama” has got to be The Divine One – Diane Gaston! Yes, you! You really have helped me along this twisty, bumpy road to a writing career with your wisdom, your concern, your advice and those great late night phone calls when I have no CLUE what to do about a request or a query! You’re the best!

I have just finished The Vanishing Vicountess and I LOVED it. I think the story was great and I loved Tanner as a hero. Am I mistaken or did you also write my other favorite hero Brenner? I have just purchased another book on my Kindle. This one a collection of three books by various authors, you included among them. I can’t wait until my assistant goes home so I can sit in my office and read.

And yes, Jane Austen does have an office and goes to work five days a week (if she’s luck sometimes her job includes weekends) but is thoroughly satisfied with what she does.

Hey, if Jane Austen loves my heroes then I must be doing something right!

So nice of you to say, Jane. You are right. Brenner is another of those voices inside my head, making me tell their stories. Tanner has more of a sense of humor, though.

If you are so inclined, my RITA winner, A Reputable Rake, is in the Rapturous Rakes Bundle on Kindle. And Tanner reappears in Scandalizing the Ton. Both on Kindle!!

I just read Amanda and Deb’s stories in The Diamonds of Welbourne Manor on my Kindle. Wow. I LOVED THEM.

Yes I thought Tanner had more of a story. I was wondering what other book he showed up in. I did buy the Rapturous Rakes bundle and am reading it now. I will go on to Scandalizing the Ton next.

I also received The Devlin Diary on my Kindle today. Different time period, but wonderful author. I enjoyed The Rosetti Letter so much that I’m excited for this one. Right now however, I am in a Regency Sate of Mind.

If it is Tanner you are looking for, Jane Austen, then you must get Innocence and Impropriety. This is the book that Tanner tried his best to take over. I only shut him up by promising him a book of his own. But it isn’t on Kindle! So I’ll forgive you if you don’t read it. Because I UNDERSTAND!

Diane,
Congratulations on Scandalizing thTon And Vanishing Viscountess. It’s definitely well deserved. I loved both books. Now that I know Tanner is also in Innocence and Impropriety, that’s my next read. 🙂 Thanks for that info. As for mothering I had just my Mother, the most amazing and loving woman on this planet. I miss her very much but her devotion to her children lives on in our hearts.
Carol L.

Carol L, I can see you love Tanner as much as I do! Hope you enjoy Innocence and Impropriety.