In praise of nettles

One of the things I love about England is that you don’t get poison ivy. Poison ivy, ugh. I have a backyard full of it (plus other assorted vines for variety) and I’ve just spent a fun hour drinking coffee with a landscape architect and talking about gardening and writing. 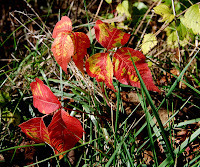 Did you know Jefferson planted poison ivy for decorative purposes at Monticello? Of course, Jefferson himself didn’t actually plant it–he owned people to do that sort of thing for him. And the only saving grace of poison ivy is that it’s gorgeous in the fall. The rest of the time, ugh again. The only organic way of removing it is to get goats in to eat it. 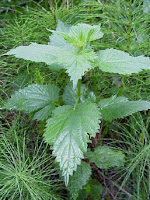 England (and Europe and the Himalayas) does have one native plant with uncomfortable side effects, and that’s the stinging nettle. It may be native to certain parts of the US too; as ever, it’s a case of conflicting information. US nurseries often sell them in the herb sections. And the sting of a nettle is nothing compared to what poison ivy can do, unless you have an extreme allergic reaction or have the misfortune to fall naked into a patch of them (no I haven’t, but feel free to use in a book). Unlike poison ivy, nettles will sting you right away and you’ll know about it.

Here’s a close up of the business end of a stinging nettle–it’s those little hairs that do the damage.

But it’s a truly wonderful plant. Steamed or boiled, the nettle loses its sting and is edible, medicinal, and can be used to make fabric and rope. Regency country-dwellers and stillroom managers would certainly have known of the virtues of a plant that has been around for centuries, and almost always connected with human habitation. Here’s a quote from British naturalist and writer Richard Mabey:

The wooded sites of Romano-British villages on the Grovely Ridge near Salisbury are still dense with nettles subsisting on the remains of an occupation that ended 1,600 years ago.

Nettles can be used to make tea and beer, boiled like other greenstuffs, and are high in vitamin C. See A Modern Herbal for the many uses of the plant, including these couple of interesting functions.

Although in Britain upwards of thirty insects feed solely on the Nettle plant, flies have a distaste for the plant, and a fresh bunch of Stinging Nettles will keep a larder free from them.

If planted in the neighbourhood of beehives, it is said the Nettle will drive away frogs. 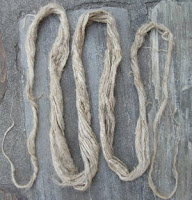 Nettles were also made to make cloth until early in the 20th century, and certainly in the Regency. Because the fibers are hollow, the fabric breathes, keeping you cool in the summer and warm in the winter. Most nettle fabric is produced now in the Himalayas, and may well make a comeback now hemp and bamboo have become popular for clothing.

You can buy gorgeous nettle shawls at the Bamboo Fabric Store and the fabric in this section.

So my question of the day is do you own any nettle clothing or have you drunk nettle tea? Or eaten any foodstuffs that grow wild–young, tender dandelion leaves in salads, for instance? Or, share your poison ivy or stinging nettle experiences with us!

Nope, never eaten or worn stinging nettle, but the plants did figure prominently in our childhood games of Truth or Dare in Wisconsin.

I’ve had no unpleasant experiences with either, though family members have related camping stories about both. The most memorable being a friend of theirs who mistook nettle for lambs tail out in the wild. Ouch.

Goats eat poison ivy? Hmmm… it never occurred to me that the song was anything more than nonsense.

I haven’t ever managed to work up the nerve to use the dandelions in the yard, though we did have a comfrey plant for a while.

I’ve eaten dandelions and fiddlehead ferns, but never nettles. I’ve also eaten those nice edible flowers, usually in places that charge way too much, but the salads are totally delicious. Oh, and we used to harvest rhubarb from the back yard when I lived in New Hampshire.

When I was a kid my friend’s mom said she was immune to poison ivy, but she had a terrible, very serious attack after clearing out a lot they owned. I never forgot that. Just because you’ve escaped poison ivy once, don’t think you can do it again.

I never learned to recognize poison sumac and the lack of that knowledge has bothered me my whole life.

I actually considered borrowing my brother-in-law’s goats for a while except the logistics (how many goats can you fit in the back seat of a Hyundai and how do you stop them eating the upholstery?) defeated me.

Young dandelions are delicious with a peppery flavor–very nice in salads. I’ve also eaten honeysuckle flowers–and although I know it’s a horrible and invasive plant, I love the scent.

Now, I’ve heard everything. Janet, truly, in PRAISE of nettles?! I’ve had the good fortune to never meet a nettle, poison ivy, poison oak, or a cobra.

BTW, Riskies… I have the sneaky suspicion that Janet in her current dress is the cover of Diane’s and Ammanda’s book. Aye or Nay? Discuss.

Well, this is one of those things that one would say you learn something new every day because ah, well, I never heard of nettles, I don’t believe. But the only thing unusual that I’ve been told that I ate was I apparently ate one of Mom’s plants when I was quite young. Believe it was a spider plant. Forget that detail now. LOL

I’ve eaten dandelions in salads, and like Megan edible flowers in overpriced restaurants, but never nettles! (I think the name puts me off–sounds like you’d get thorns in your mouth!!). And luckily I’ve never had a poison ivy encounter. I wouldn’t mind getting some goats to come eat the weeds in my yard, though. 🙂

Nettles–just reading the word I can feel that awful sting, tingle–stingle? With a burning. Ouch.

The last time I got nettled was picking cow parsley while chatting to a companion…suddenly I was yowling!

I’ve had nettle soup in a very nouveau fancy restaurant in the UK. Just proving that everything old (or traditional) will become nouveau again!

Love fiddleheads…’tis the season and I eat them every chance I get. (But unlike friends of mine, I don’t gather them myself.)

I’m not allergic to poison ivy–or at least I wasn’t. They say immunity can disappear over time, so I long ago gave up the stupid trick of picking the stuff and rubbing it on my arm, saying, “Look, look, I’m not afraid!”

Hail fellow Cheesehead Keira!
I spent my childhood til age ten in the small town of Markesan about an hour out of Madison. After that I moved all over the place.

LOL! I love it that “nettled” can be a verb…

Nettles taste like gritty spinach and can be used in any recipe for cooked spinach. They are fine once you have poured hot water on them.
I have done — nettle frittata, nettle soup, nettle pasta.
I have also used wild garlic in the past as well.

They do sting if you brush against them and I have had terrible rashes from them in the past. Thus the saying to grasp the nettle firmly — they sting less that way.
Nettles make a great plant food, if allowed to soak properly.

Nettle clothing always reminds me of the fairy tale about the wild swans and girl who tried to break the enchantment.

They are found whereever the ground has been disturbed in Britain.

Sigh…Poison ivy…Every year I manage to get a case of it in the most unusual, unmentionable places on my body. This year it’s…Well let’s just say wearing undies is unpleasant. As a professional horticulturist you would think I could manage to recognize it in time to avoid an incident, but it seems like the leaves and stems just jump into that handful of garlic mustard or creeping charlie I’m pulling from a flowerbed.

In the past, I’ve taught workshops on identifying and collecting wild plants for food. It’s a lot of fun for people to sample fresh salads and drink hot tea from leaves, tubers, etc. they’ve harvested. It’s empowering in some way. It’s also put me in contact with stinging nettles (they really so sting, but I prefer it to PI!!!) and of course more poison ivy. Jewel weed, another native plant in North America is supposed to help heal the rash, but I haven’t had much success.

The nettle fabric scarves and shawls were beautiful. Thanks for the link. Hand spinning is a hobby of mine, and I got that old rush of a feeling…Ooo, I’ve got to try that. But after reading about the process, it sounds daunting. Those women in India deserve every penny for all the work that goes into preparing the fiber just for spinning.

Dock leaves help with stinging nettle rash, but I don’t know if they grow in the US, so it’s not much help! Thanks for sharing your culinary experiences, Graspingmara, as well as the cringeworthy poison ivy experiences.

Michelle, you’re absolutely right about grasping the nettles to avoid being stung. I think it compresses the bristles.

I’ve never been stung by a nettle–nettled–in the US, only in Britain. Is the variety in the States the same or similar to the UK type?

no matter how nice you make stinging nettles sound i will never get past my high-level hatred of them.

i lived in england for a few years when i was little had an (emotionally) scarring experience of falling off my bike in shorts and a tee-shirt right into a GIANT patch of stinging nettles.

if you even BRUSH part of the leaf of one you’ll get an immediate welt. i won’t go within 2 feet of one.