It’s an interesting phenomenon that the closer you live to a historic site, the less likely you are to visit it. I had dinner last night with Diane and Amanda and our conversation included a joint confession from me and Diane about all the places we hadn’t been to in the Washington DC area. We also exchanged ideas on time management but I fear we only encouraged each other on new ways to procrastinate.

Last Saturday I took time off from writing by visiting Tudor Place with my friend and fieldtrip companion Kate Dolan. I’d never visited (of course), although it has a family connection via the Custis and Calvert families to Riversdale House Museum (which I visit fairly often as I’m a docent). Also I wanted to check it out as the Beau Monde field trip on July 15 includes visits to both locations. And if you’re a member of the Beau Monde, you’ll hear about it soon. Honest! 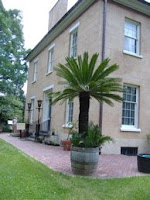 So, the house. Absolutely gorgeous. It was built by Martha Washington’s granddaughter and her husband, Martha Custis Peter and Thomas Peter, on land acquired in 1805, and designed by Dr. William Thornton, architect of the US Capitol. Construction ended in 1816 and the Peter family lived in the house until 1983. Consequently it is a house filled with almost two centuries’ worth of art and artefacts collected by the family, several of whom were amateur artists (quite good ones). It also has a superb garden.

This palm tree outside the house is one of several that are third-generation descendants of trees acquired by the Peters almost two centuries ago. 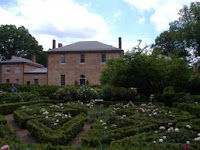 The house isn’t built of stone, as you might think, but stucco scored to look like it over brick construction. Photography was not allowed inside the house, but one of the highlights for me was seeing the original 1920s kitchen with original fittings including a mighty iron range and hot water heater. There’s also a very lovely butler’s pantry with many sets of china–because the family were in the house so long each new bride brought new china to the house.

The house is also particularly rich in items owned by George Washington, including china and silver. Moreover, since this was a family who didn’t throw anything away, ever, there’s a terrific amount of documentation in the form of bills, letters and so on. Many major historical figures were entertained at the house including Lafayette and Daniel Webster. 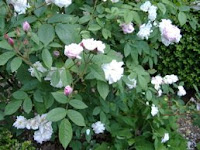 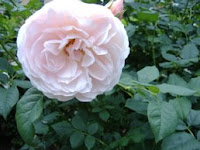 I was lucky enough to visit at peak rose blooming season, which was spectacular this year because it’s been cool and wet. The garden has many varieties of heirloom roses, many beautifully scented; and with a wide variety of scents, too–peppery, spicey and so on. The roses on the left are from the early nineteenth century–early varieties tend to be rather straggly with small blooms, and this one is unusual in that it blooms all summer (or as long as it can stand to in DC). The one on the right–oh, it’s a nice (if off-center) picture. I think it’s probably a variety from later in the century. By July most of these roses will probably have given up the fight against the heat so I was glad to see them and take these pics. 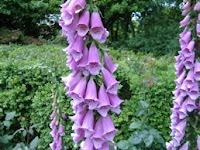 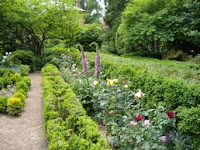 Here’s an overview of the gardens and a closeup of some foxgloves, which to my surprise grew in full sun among the roses and seemed quite happy there. 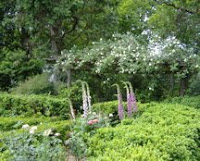 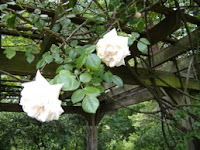 Here’s a very lovely rose arbor and a close up of the roses growing on it. On the left you can also see some of the gigantic boxwoods in the garden. There were also some huge trees that may have been original to the garden and although I briefly met the garden specialist I didn’t have time to bombard her with as many questions as I would have liked.

So this seems as good a time as any to ask the question: What are you doing this summer? Are you coming to the RWA National Conference in Washington, DC?–and I’ve just heard that I’ll be signing A Most Lamentable Comedy at the July 15 “Readers for Life” Literacy Autographing, which I’m very excited about. Are you planning a vacation? Where? What will your beach reads be?

I am definitely coming to the national conference in DC and I am looking forward to the Beau Monde day trip!

I LOVE heritage roses and have a few in my small rose garden. One of these days when I am a little old lady of leisure I intend to expand my rose garden so I can putter around in it.

And I will definitely be there to buy an autographed copy of your newest one, Janet!!

I think I am going to the International Foundation for Cultural Property Protection in Chicago and becoming a certified cultural property protector. I guess that makes me Ben Stiller in Night at the Museum. (I’m already certified in museum security).

I will also probably go to NYC and Fayetteville, WV since that’s where my family lives and we normally go visit. Always fun. Very different places. I think I want to take in a show in NYC. Anyone know of any good ones going on?

I will miss going to RWA this year, but I’ll continue to be busy helping my husband recover from his stroke. We are toying with the idea of a long weekend somewhere with a pool but that’s as close to a vacation as his therapy schedule will allow.

But I must share some good news. Rich squeezed my hand today, on purpose. It’s the first time we’ve seen any voluntary movement in his right arm since the stroke and a very good sign. 🙂

Jane Austen, what an interesting field to work in.

Louisa and Azteclady, look forward to seeing you there, and sorry we won’t see you this time, Enid.

My roses are just coming up, Janet. So lovely to see, and such a nice reminder that summer is coming.

Oh, and Elena, what fabulous news! I am so happy Rick is improving, no doubt thanks to your care.

And congrats to Louisa on being a finalist in the Royal Ascot.

And the Tudor Place garden pics are lovely.

And I’m cheating on my new Internet diet. Gotta go.

Thanks for sharing your lovely pictures. I’m not sure if I’ll be able to make the Beau Monde tour, but I might drag my husband to see the Tudor Place the weekend before the conference starts.

Amanda and I are now in NYC after riding from DC to NYC on a bus that was worth every penny of its $25 fare.

I met with my webdesigner extraordinaire, Emily Cotler, and Amanda and I had dinner with Andrea Pickens, then we went to the ballet to see American Ballet’s THE CORSAIR (based on a poem by Byron)

Jane George, we thought of your daughter!!

More later on Book Expo (saturday) and the Met (tomorrow)

I wish I could get there maybe one day.

It is very cold here today in Australia a great day for curling up with a good book some chocolate and a nice coffee.
No holidays at the moment but I do have lots of good books to read which makes me very happy.

My summer will be a long rest! As a teacher who is partially disabled (but works anyway!) I soooo need the time off.

There will also be 3+ weeks at the Jersey shore- which will be all about reading (historical fiction and murder mysteries- LOTS of both) and needlework. I am working a historical sampler from the Ackworth School- the Beatrix Potter Quaker Sampler- and doing a mystery sampler with a group.

Good grief- when I write it all down it doesn’t sound very restful, does it?