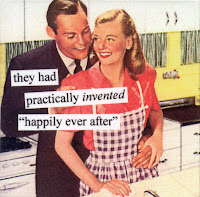 A lot of times, when romance readers talk about why they read romance, they mention the “Happy Ever After,” or “HEA,” as we’ve shorthanded it.

And that is the same reason many of us don’t read literary fiction, because there’s often an UNHappy Ever After, and that is unfulfilling, not to mention depressing.

For me, however, I’ve come to realize that what I require is a Satisfying Ending. I don’t need it to be happy, I just need it to be resolved. And, sometimes, literary fiction doesn’t resolve things, it just shows us that our miserable lives continue on and on past the book.

I like reading genre books because the point of the book is usually reaching some sort of conclusive ending: The murder is solved, the battle is won, the fantastical planet is saved. Something that makes you feel as though you’re not missing anything, like the world will continue as you’ve come to understand it even though the last page has been read and absorbed.

For example, I was thinking of one of my favorite authors, Bernard Cornwell, and his trilogy of the Archer’s Tale; the overall goal of the main character is to find the Holy Grail, but there are just as large goals that are begun, and concluded, in each book. Fabulous, fabulous writing and plotting. Back to romance, Elizabeth Hoyt does a similar thing with her Four Soldiers quartet. Each story has a traditional HEA, with a larger goal drawn out over the course of the four books. Ken Bruen‘s Jack Taylor series reveals more about the main character over the course of the two books I’ve read, and also satisfactorily solves the mystery.

In some ways, a good ending is like a good dessert: It can make up for a lot of faults in the meal. A bad dessert can literally leave a bad taste in your mouth, just as an unsatisfactory ending can ruin all the hard work the author did in the first three-quarters of the book.

I have read one book where an open ending worked for me, and that was Michel Faber‘s The Crimson Petal And The White, a historical fiction book that was just luscious. I had been warned, however, that the ending wasn’t traditional, so I was prepared.

How about you? Do all your endings have to be happy? What book has been ruined for you by the ending? What authors end books particularly well?

PS: A new Risky is coming to town! Wait for her arrival sometime next week!

My life is tough enough. I read for escape and for that HEA that makes it all worthwhile. I like epilogues that let me know “Yes, they continued to live happily ever after.” I don’t mind if it is a bickering, rowdy, chaotic HEA so long as it IS an HEA.

One book that the ending ruined for me and insured I would never read one of this author’s books again was the end of Nights in Rodanthe by Nicholas Sparks. I loved The Notebook and picked up Nights next. The ending ruined it. When you’ve lived through that sort of thing you just don’t want to read about it.

All of my favorite romance authors write great endings and I thank them for it every day!

Good post Megan. My knitting/book group picks more literary books. They would never choose a romance and am ok with that. I can get my romance on elsewhere but I can’t stand the unsatisfactory ending.

I don’t have to have a HEA but I do need some sort of resolution.
I also realized with the last book we read that I needed a real GMC. The book had none and I found myself giving a short GMC lesson over dinner. It was just a bunch of characters going through life with some back flashes but towards nothing much to me. It made me wonder if I had been so trained by my own literary taste.

In the end most of the women admitted to not liking the book.

I love plots that leave you wondering and thinking and dreaming about the characters. Even if there’s resolution with the main plot I want to feel that there are some questions that are not answered, and I don’t mean in the sense that there are stray characters wandering around for the sequel.

One of the best examples I know of a brilliant ending is in Kate Atkinson’s Case Histories, which is a sort of literary mystery hybrid. At the end, the reader knows who committed the murder. The reader also knows some things that the characters don’t and some of the characters know some but not all of the secrets. And it didn’t shout “Sequel Ahead” tho she’s since written two more books with the same characters.

I really admire romance writers who can spell out the HEA and the sequel but I can’t do it. I feel strongly that marriage/commitment is a beginning, not an end, and I like to think of it as the h/h jumping off a cliff, hand in hand. Not quite like Thelma and Louise, but definitely with a sense of risk and adventure.

Similarly, I think some minor characters are so obviously destined to end up together, why spell it out? That got me into trouble with some readers/ reviewers of Rules, who wanted to see Inigo’s mom’s HEA. I reckoned she was a tough and smart enough character she’d figure it out herself. She did, somewhere between Rules and Comedy.

And Comedy has a very much jumping off a cliff ending. Just a warning.

I really enjoyed the Little Lady Agency series until the last one. I felt that the author had fallen to peer pressure and changed her hero from the first two books into a villain. I just didn’t buy it. I didn’t like the ending.

I also loved the Maisie Dobbs series until the author ditched the man in it as well. He had been good for three books and then suddenly it was over and there was never a good explanation of why. It was like a whim or something which seemed very out of character for Maisie.

Sharon Kay Penman’s Welsh trilogy does not have a HEA because it follows history accurately, but I didn’t mind. I was pleased she stayed true to history and learned to love the characters all the more for it.

William Napier also follwed history with Julia, which also does not have a HEA, but the ending fit and was satisfactory.

I want to read Palace Circle by Rebecca Dean, but am a little unsure. Does anyone know anything about it?

All this talk of couples jumping off cliffs brought this song by The Decemberists to mind. I just saw them live. Fantastic show. Take a listen if you have the time.

And I love a literary novel with a good resolved ending and a sense of hope. One of my faves is The Shipping News.

Louisa, I share your poor opinion of the books of Nicholas Sparks. It’s as if he’s under the impression that if he adds Fateful Disaster to the story then that gives it literary depth. Er, no.

I agree with Louisa. Everytime I turn on the TV it is DEPRESSING DEPRESSING DEPRESSING….Jobs lost, companies going bankrupt, foreclosures.
In the midst of this I must have my HEA. It is something I can depend on.
I too was upset at Nights at Rodanthe!

One movie (based on book) with a sad but satisfying ending was “The Constant Gardener” by John LeCarre. The hero at first believes himself to be a coward, unloved and unworthy of love. By the end he realizes that he is, in fact, capable of great courage and that his wife loved him very much. I would have loved a classic romance HEA, but that was not possible, and the ending was quite satisfying without it (it didn’t hurt that Ralph Fiennes played the hero in the film).

I feel the same as Ms. Austen about the Maisie Dobbs books. I think the author is trying to make a point about how many women of the era remained single because so many men died or were grievously injured in the war. What doesn’t work is that I can feel the authorial hand manipulating Maisie, and it’s never satisfying when I see the puppet master working the strings rather than feel that the character’s thoughts/actions are organic to that character.

As for “The Shipping News”, it was such a joy to see that Proulx can actually write a happy ending. She writes such lovely prose but she puts most of her characters through hell and leaves them there.

The worst ending, however, was the Elizabeth George book where she killed off one of the main characters. My son was in Iraq at the time, and I couldn’t deal with that death — especially since it was beautifully written (therefore more powerful) but seemed to spell permanent loss and loneliness for another of the main characters.

Because I only read romance all of the books give me the ending I need yes some are better than others and I do love epilogues.

I can’t remember reading a book that hasn’t given me the ending I need.

I do love a HEA or satisfying Ending it doesn’t always have to be a marriage depends on what I am reading whether it be a historical or contempory or a paranormal.

Hey, thanks to all of you for weighing in so thoughtfully.

I don’t usually like epilogues, but I appreciate the impetus behind including them.

Janet, I agree with you as to Anne Stuart, whose endings are not traditionally satisfying, but are resolved.

I really liked Andrew as well and thought he was a good fit for Maisie. Now I’m not reading the books even though I enjoyed them. I want Maisie to be happy. I like to think if these women can get happy endings then maybe I’ll get one too.

Although if I’m anything like my namesake then I think I don’t get one 🙁 But I do become a kickass author.

Okay, too many questions (that’s my excuse for blank mind syndrome, at any rate)

I really like the ‘satisfactorily ever after’ idea, though I’ve always thought of it as “convincingly happy together” myself.

The stories I enjoy the most are those where I can picture the protagonists overcome the hurdles that life *will* throw their way down the road–there is not such thing as a smooth sailing through life, after all.

Hey, I just read the interview with Anne Stuart in this month’s Romance Writer’s Report. She sounds like a lady who keeps it real and who would be great fun to hang out with. Much like the lovely Riskies, et al.

I actually attended a really great talk by Jayne Ann Krentz. She talked about the difference between genre fiction (which inherited the heroic tradition) and literary fiction (which grew out of psycho-analysis).

You’re echoing some of her thoughts in your post!

Wow! I am in good company, then. Nice to know it’s something others talk about, too.