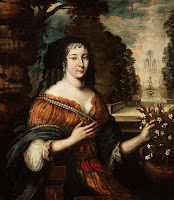 I’m currently off having fun in New York with Diane and Megan! Next week I hope to have some pics and an account of our time here (BEA, museums, theaters, Lady Jane’s Salon, oh my!). But I’ve left this post about a most Risky lady of history, the author and salon hostess Madeleine de Scudery (who died on this day in 1701).

Madeleine was born in Le Havre in 1607, where her father was captain of the port. He died when she was about 7, and she went to live in Rouen with an uncle who had spent time at Court and possessed a large library, which she avidly explored. Sometime after the death of her mother in 1635, she went to live with her playwright brother Georges in Paris. With her brother she attended Catherine de Rambouillet’s famous salon. Eventually she formed her own salon, the Societe de samedi, and became known as the first bluestocking of France.

She wrote many immensely long volumes, both under her own name and the pseudonym pf “Sapho,” including Artamene (10 volumes, 2.1 millions words, 1648-53), Ibrahim (4 volumes, 1641), and Almahide (8 volumes, 1661-3). They are set in the classical world or an imaginary Orient, but their language and plots reflect the life of 17th century Paris, full of philosophical conversations and many abductions of heroines. The characters were often based on Madeleine’s own friends and acquaintances, such as her lover Paul Pellison.

For more information, her biography and correspondence were published in Paris in 1873, and there is a chapter about her in AG Mason’s The Women of the French Salons. I find her fascinating, and would love to write a saloniste heroine someday!

No need to rub it in, Amanda! I know you are having a fabulous time in New York with the Divine One!

Madeleine sounds like my kind of lady! I think it would be fun to write a saloniste heroine!

I think we should totally reinvent the salon. I just bought a fainting couch so that makes my living room perfect. I’ll provide port, sherry and ratafia. Any thoughts on what to eat? Or should we just get really liquored up and discuss issues? I think it’d be great.

I’d love to create a romance salon in Washington DC, something Amanda and Diane and I discussed very briefly when we met–on the same lines as Lady Jane’s salon. If anyone else is interested, please contact me.

I did write a saloniste heroine–Fabienne in Dedication.

Janet….well after I finish the Ph. D. I’d like to end up in DC, so I’d be interested, but I still have several years left on the Ph. D.

Watcha talkin’ ’bout? The Riskies blog IS a salon! *grin*

Sans absinthe and madeleines, but still…

LOL! That’s true, we ARE a salon. Though it would be great if we could figure out how to serve absinthe 🙂

I’m now vegging at Diane’s before heading home tomorrow. Lady Jane’s last night was as fab as everyone says–more about it all next week…