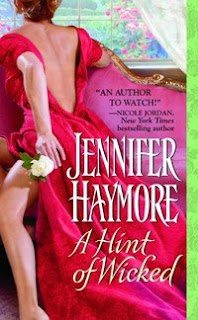 The Riskies are very excited to welcome debut author Jennifer Haymore to the blog today! Her first book, A Hint of Wicked, is out this month from Grand Central Publishing. Comment for a chance to win an autographed copy…

Riskies:Welcome to the blog, Jennifer! Tell us about A Hint of Wicked…

Jennifer: Thanks so much! This is one of my favorite blogs, so I’m thrilled to be here! A Hint of Wicked is the story of a woman who’s spent 7 years mourning her husband lost at Waterloo to finally marry again, only to have her first husband appear less than a year into her new marriage. She’s legally bound to her first husband, her second husband is appealing to the courts, and she’s completely torn between the two men.

Riskies: Sounds exciting! How did you come up with the idea for this book?

Jennifer: My husband usually brainstorms with me, and one night I wanted to brainstorm some new ideas for a Regency. He said, “What do you think of a husband walking in on his wife having sex with someone else?” I shuddered and said, “That’s a horrible idea–nobody likes adultery in their romance!” He said, “Hmmm…but what if she doesn’t know she’s committing adultery? What if…what if she thinks her husband is dead?”

Hehee! That’s how A Hint of Wicked was born. I took that idea and ran with it. My husband read an early version of the manuscript, and after he finished he turned to me with a scowl on his face. “This is nothing like I imagined it,” he said. “Nothing!” I just grinned at him and said, “Too bad.” It was his original idea, but MY story, after all!

Riskies: And what’s “risky” about this book? (this one should be easy, LOL!)

Jennifer: AHOW strays a little from some of the established conventions of romance. There is truly more than one hero in this book, and one doesn’t get a happy ending. As much as I wanted my heroine to end up with both men (and as much as she wanted it!), it wouldn’t have been a realistic ending for the character in the world she lives in, not to mention that her husbands wouldn’t have accepted such a resolution. Fortunately, she does end up with the man who is right for her, and the other hero will get his own HEA in a big, big way—A Touch of Scandal will be released by Grand Central in April 2010.

Also, I don’t want to give away spoilers, but I will say the heroine is sexually attracted to both men. And she has certain fantasies I would definitely call risky…

Riskies: Did you find any interesting or surprising research tidbits that went along with this book?

Jennifer: Oooh, I found tons. I spend hours reading through books and resources written in the early 19th century. From theatre reviews (the performance of A Vision of the Sun depicted in AHOW was actually performed in Covent Garden on that date) to medical journals (I feel like an expert on laudanum and opium overdose now!) to dinner menus, I had a great time with all of it.

Riskies: And what’s next for you?

Jennifer: I’m finishing up edits on A Touch of Scandal as we speak. By the end of the month I’m going to start work on Lady Rebecca’s story. (Rebecca is the younger sister of one of the heroes in A Hint of Wicked), and I’m so excited about that!

Thanks for having me here at the Riskies!

You can visit Jennifer’s website for more information and research info! Remember–be sure and comment for a chance to win a copy of this very intriguing book!! And join us next weekend as we welcome Terri Brisbin…

Ooh, great to see you here, Jennifer! Congrats on the release, on the gorgeous cover, on the buzz — and on everything else!

Can’t wait to get my hands on the book…I think a trip to Borders tomorrow is in order!

I am another one who can’t wait to read this book I have heard so many great things about it.

I love the fact that I will be able to read about the “other” hero next April that one will be a birthday present for me YAY.

Congrats on the release Jennifer

Welcome to the Riskies, Jennifer! Your book definitely sounds like it fits in here (g)

And I’ll bet readers will be dying to read the next book.

I just wanted to tell you I really liked the book and can not wait for the sequels. Please do not enter me in the drawing since I have already read the book.

Am I the only one who is curious about Mr. Haymore’s version? *g*

(no need to enter my name)

So glad to see you here! I can’t wait to read your debut! I’m so excited for you and I love the idea of a triangle.

I have heard all the buzz and I can’t wait to read this book. Did you know all along which hero would win her heart or was that something you learned in the writing?

A fabulous premise, and I hear nothing but great things about your story! I’m trying to avoid any more posts about the story, however, as I want to be surprised at the ending. I can’t wait to read it. 🙂

This sounds really interesting. Definitely going to read it.

Many, many congratulations on the release of your novel – definitely one for my TBR list. The cover is gorgeous, you must be so excited.

Hi Jennifer, congrats on your new debut book. I love to read authors first books and I am really looking forward to reading this one. Thanks for sharing with us today.

Welcome to RR, Jennifer! I can’t WAIT to read this book and see how it all comes out in the end 🙂

I so want to read this book! I just haven’t had a chance to go out and get it!

Hi Jennifer! I don’t mean to keep cyberstalking you, but you keep popping up on my Google reader – you’re everywhere! And your fabulous book is too. I just saw it on an end cap at Joseph-Beth this morning – hooray!

This book is everything I love about Regencies – using all of the period’s conventions to create compelling conflict for your characters. And you really do push the boundaries while still keeping it realistic. I love it! 🙂

Hi, everyone! Thanks so much for stopping by! And thanks for your congrats.

JCP, I’m so glad you enjoyed the story!

M, I don’t know what Mr. Haymore was talking about, really, but we’re talking about a guy whose favorite movies are The Matrix, Predator, and Rambo, LOL. I don’t dare ask!

Louisa, that’s a great question. Honestly, when I was first developing the story, I had no idea. It took much hair-pulling and discussions/arguments with my editor and agent and friends and family to figure it out. It was a team effort! But now that it’s all said and done, I’m utterly convinced Sophie ended up making the right choice. The hero of the second book gets a heroine who is completely perfect for him.

Gillian, I’m always amazed when people say they WANT to have spoilers. I’m with you–if you tell me the end, it ruins it for me!

Thanks again, everyone. And thanks again for having me–it’s so exciting to be here!

Hi Jennifer,
I’m so glad you’re hear. Also very excited about read your new novel and wish you much success. Following your blog makes it a definite read and it’s great knowing the sequel will be out in a few months. 🙂
Carol L.
Lucky4750@aol.com

Great to see you Jennifer! Your book sounds delicious – and I love the cover! Take care. Caroline

Congrats on the release, this book sounds very interesting! I’ve heard so many great things, it’s on top of my wish list!

Hi Jennifer,
Congrats on the new release. The stepback cover is gorgeous. Can’t wait to see who Sophie ends up with.

Sounds great. I look forward to reading it this summer.

And thanks to the Riskies for introducing another fabulous new author!

hi and welcome Jennifer. I, too, love the cover= the colors are vibrant and alive.

What an amazing premise; first husband missing, marry again, 1st husband shows up, second husband appeals to the courts. Wow, a great read by the sounds of it.

AHOW sounds great. I do like when books stem from other books and it looks like this will happen with AHOW.

I guess that’ll teach him to write his own book next time. 😉 –willaful

Hi Jennifer, love that there’ll be three related stories: I love revisiting the couples that have already found their HEA.

Hi Jennifer!! I’ve been so excited about this book!! Is there one special site or any site that you like the most to use for your research?

I so love the tease excerpts I read on the book!

Caroline, robynl, and Jane, I love the cover (and the stepback) too! The cover gods were smiling on me, definitely!

Carol, Jane, and Allison, As a reader, I’m a sucker for connected stories. I love getting glimpses of the lives of characters after their HEA. I hope readers feel the same about AHOW and its sequels! 🙂

Thanks to everyone who stopped by, and thank you again, Riskies, for having me here!

Hey Jennifer!
Congrats on the release!
I love the cover of the book.
I cannot wait to get my hands on this book!

Get every new post delivered to your inbox
Powered By WPFruits.com
wpDiscuz
27
0
Would love your thoughts, please comment.x
()
x
| Reply