The Strand Bookstore, 12th Street and Broadway, is one of my favorite places to visit in New York City. Eighteen miles of books! Used and New. What’s not to love? 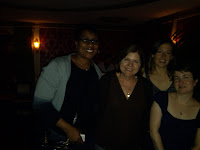 Last Sunday Amanda, our friend Kwana and I went to The Strand. I mean, after a day at Book Expo, in which Kwana managed to get two shopping bags of books, what we all really needed was…more books.

(from left to right, the photo shows Kwana, me, Hope Tarr, and Amanda the night before)

We spent most of the time in the England History aisles at The Strand. I suspect we only saw about one mile of the 18 miles of books. 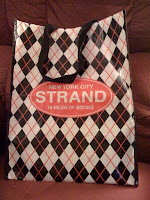 We each bought these cool totebags to hold our purchases and Amanda and I kicked ourselves for not buying more of them for contest giveaways and such. It turns out you can order these online, along with other cool The Strand stuff, HERE.

And here are my purchases! 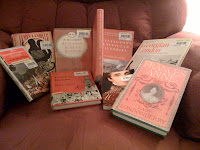 London Homes (1952) by Ralph Dutton: “…traces the development of the residential areas of London through three and a half centuries.”

The Last Duel (2005) by James Landale: “In 1826 a merchant named David Landale shot his banker dead in a duel….one of the final fatal duels in European history.” The author is a descendant of David Landale.

The Life and Death of Benjamin Robert Haydon (1948) by Eric George: “…an outstanding figure among men of art and letters in the first half of the nineteenth century.”

Frances Anne, Lady Londonderry (1958) by Edith, Marchioness of Londonderry: Frances Anne was the second wife of the brother of Lord Castlereagh, who inherited the title after his brother’s suicide.

Wellington (2005) by Elizabeth Longford: This is a slim abridgement of her two volume biography.

Your Most Obedient Servant: James Thornton, Cook to the Duke of Wellington (1985) by James Thornton: This is a reprint of an 1851 interview conducted with the man who cooked for Wellington during his campaigns.

A Hundred Years of Georgian London from the Accession of George I to the Heyday of the Regency (1970) by Douglas Hill. The title says it all!

A Holiday History of Scotland (1986) by Ronald Hamilton: Gotta laugh. I thought this was a history of the holidays of Scotland, but it is a short history of what vacationers to Scotland might want to know about the country’s past to enhance their “holiday” experience. Duh!

Kwana or Amanda, what was the name of that book that you both snatched off the shelf before I could get to it? Something about Nineteenth Century London???? I need it!!!

Have you bought any good research or non-fiction books lately? Do you have a favorite used bookstore?
What do you think about reusable totebags? Do you use them?

I’m still giving away backlist books at my website contest.

The Vanishing Viscountess WON the Golden Quill for Best Regency.

I love the Strand and go there when I’m in NYC. How is that your books all seem to color coordinate even with the bag?

18 miles of books! My world indeed!I’d like to get lost inside there…Planned for my third time in New York. Hope it’ll be soon!

Yeah for The Vanishing Viscountess!

And I fly to NYC Sunday. But The Strand sounds dangerous. Cool bag tho.

Jane Austen, I planned it that way. Only bought books that matched that cool bag. Would have spent twice as much otherwise.

Maria Grazia, The Strand has only been there 80 years. You’d better hurry!!

Jane George, thanks for the congrats. We certainly thought of your daughter while watching Le Corsair. You will have a lovely time exploring the city! I envy you!

Congratulations on the win! As for history books, I have a book-a-day calendar, and the one for Saturday was “A Sense of the World: How a Blind Man Became History’s Greatest Traveler” by Jason Roberts. It’s about James Holman (1786-1857), who joined the British Navy at 12 and was blind by 25. He nonetheless traveled alone to China, Europe, Russia, and Africa, along the way studying medicine, hunting slave traders, running afoul of the czar, and publishing several memoirs that provide a fascinating portrait of the Napoleonic era. It might be a good source for one (or more) of the Riskies.

Fascinating, Susan DC. I suspect the man had a faithful servant or two.

Congrats, Diane, on the Golden Quill!

Judy, those are two of my favorites, as you well know!!

Amanda, Thanks. I just bought the book from abebooks.com for $.30 cheaper than you and Kwana paid. Oh, revenge is sweet!!!

CONGRATULATIONS O Divine One !!! The Vanishing Viscountess is fabulous! No wonder it won!

18 miles of books??? THUNK !! I would have to take a vinagrette with me. The sight of all those books would give me a fit of the vapors for sure!

LOL on that revenge buy, Diane !!

I finally bought a copy of Madmen by Roy Porter.

My prized possession is an 1850 edition of –

The Stately Homes of England, Illustrated with Two Hundred and Ten Engravings on Wood by Llewellynn Jewitt

oh no, not .30 less!!! 🙂 (unless you mean it cost .30–then I would be mad, LOL). I’ve been trying to use an online German-English dictionary to translate some of the info in that beautiful fan book I bought, but it’s slow going…

Louisa, O Doggie One, thanks for the nice words about The Vanishing Viscountess.

We could have used a vinaigrette. All that squatting down to the lower shelves and craning necks to the see the top shelves made us near to fainting.

Amanda, my cost was $.30 less than you paid and I considered that revenge enough.

Everyone, Amanda’s fan book was beee-you-tee-ful, even if it was in German.

**You will have a lovely time exploring the city! I envy you!**

My daughter will turn thirteen while we’re there. We’re going to have adventures. When she’s not dancing. 🙂

My personal plan is to get the better part of a WIP rough draft done while she’s busy!

Congrats on the Golden Quill, Diane!