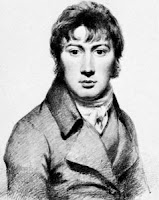 It’s the birthday of the great English landscape artist John Constable, born this day in 1776 (died 1837). He was born and grew up in Suffolk, the son of a corn merchant who owned Flatford Mill (now an environmental center), and it was expected that he would take over the family business. But while still quite young he sketched the Suffolk countryside and eventually in 1799 persuaded his father to give him an allowance so that he could attend the Royal Academy.

In 1802, he turned down the position of drawing master at Marlow Military College and around this time seems to have had a breakthrough regarding his art, realizing that his calling was as a professional landscape painter and rejecting the classical conventions of his training:

For the last two years I have been running after pictures, and seeking the truth at second hand. I have not endeavoured to represent nature with the same elevation of mind with which I set out, but have rather tried to make my performances look like the work of other men…There is room enough for a natural painter. The great vice of the present day is bravura, an attempt to do something beyond the truth.

Although he visited the Lake District his first love, and the landscape that spoke most strongly to him, remained that of Suffolk. Unlike his literary contemporaries, he did not seek or find the sublime in “romantic” landscapes. In the words of his biographer, Charles Leslie,

His nature was peculiarly social and could not feel satisfied with scenery, however grand in itself, that did not abound in human associations. He required villages, churches, farmhouses and cottages. 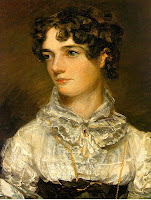 In his lifetime his paintings were far more successful in France than in England although he refused to travel abroad to promote his work.

In 1809 he met his future wife, Maria Bicknell, but her family opposed the match; they considered Constable a poor, unsuccessful artist from an inferior social background. Constable painted this portrait of Maria in 1816, the year they finally married.

During their long engagement, ten months before their marriage, he wrote her this letter:

Let us…think only of the blessings that providence may yet have in store for us and that we may yet possess. I am happy in love–an affection exceeding a thousand times my deserts, which has continued so many years, and is yet undiminished…Never will I marry in this world if I marry not you. Truly can I say that for the seven years since I avowed my love for you, I have…foregone all company, and the society of all females (except my own relations) for your sake.

I am still ready to make my sacrifice for you…I will submit to any thing you may command me–but cease to respect, to love and adore you I never can or will. I must still think that we should have married long ago–we should have had many troubles–but we have yet had no joys, and we could not have starved…Your FRIENDS have never been without a hope of parting us and see what that has cost us both–but no more.

Sadly, Maria weakened by tuberculosis and giving birth to seven children, died in 1828. Constable mourned her for the rest of his life and raised their children alone.

Constable was fascinated by clouds and skies, and if you visit Constable Country you’ll see those same huge skies. He was the first artist to paint oil sketches out of doors, with free, vivid brushstrokes. (Left: Seascape Study with Rain Cloud, painted in 1824 at Brighton, where the Constables had gone for Maria’s health.)

Check out this site from the Tate Gallery, UK, where you can compare modern landscapes with Constable’s interpretations.

And here’s a lovely interpretation of Constable landscapes:

What are your favorite Constable paintings? Here’s a list of paintings worldwide and a link to an exhibit of his huge landscapes that was on exhibit in the US a couple of years ago.

And now, in a blatant burst of self-promotion:
New website and contest at janetmullany.com and a chance to win a signed copy of A Most Lamentable Comedy in Pam Rosenthal’s latest contest.
Plus today I’m blogging over at the History Hoydens about Jane Austen’s letter of June 11, 1799, and talking about Immortal Jane at Austenprose and Jane Austen Today.

More than the paintings I think I like the letter to his future wife best. Why don’t men write letters like that anymore? I still write letters on parchment paper with a quill pen dipped in ink and seal each letter with sealing wax. I bet the post office just loves me.

@JaneAusten — would you please write me a letter?

It is nice to read that such a wonderful artist was also a good man, husband, and father.

His paintings still are beautiful. One of my favorites is Salisbury Cathedral at the National Gallery of Art, because I remember walking across the grass and coming upon the cathedral just in that way.

“JaneAusten — would you please write me a letter?”

Oh, me too!! (a few years ago I receieved a lovely wax and seal kit for Christmas, but almost set my hair on fire trying to use it. I haven’t attempted it again)

Such lovely paintings, Janet, and a great tribute!

Thanks, Janet. I didn’t know all this, though I’ve always loved Constable’s landscapes. I wonder what the music is that goes with that video. Perhaps Vaughn Williams, though I don’t immediately recognize it. Some of his music feels akin (to me) to Constable’s painting.

If you send an address (it can be your publisher’s address) to my gmail account (mrdarcyatpemberley@gmail.com) I will send you both letters written with quill pen and ink and seal with wax.

Salisbury Cathedral from Lower Marsh Close is my very favorite John Constable, although his Storm Clouds is a close second.

And good Lord, what a wonderful letter!! They just don’t make men like they used to.

Elena, I don’t know what the music is either tho I’d guess Vaughan Williams too. The next time my husband is awake at the same time I am I’ll ask him.