In writing Book 2 of my Three Soldiers Series, I’ve again read Waterloo Days on Google Books. The complete title:
Waterloo Days: The Narrative of an Englishwoman Resident at Brussels June 1815 by Charlotte A. Eaton

Charlotte Eaton traveled to Brussels with her brother and younger sister, arriving in the the city 194 years ago today. Her narrative of this trip was first printed two years later and again in 1852. It remains a vivid account and an exciting story, with such immediacy it could have been written yesterday.

This week is the anniversary of the Battle of Waterloo, the grand battle that finally ended the reign of Napoleon, so it seemed fitting for me to address what it was like in Brussels on June 15, 1815, three days before the battle.

We had not entered the hotel many minutes, and had not once sat down, when we recognised our pleasant compagnon de voyage. Major Wylie, standing in the Place Royale below, encompassed with officers. He saw us, took off his hat, and, breaking from the people that surrounded him, darted in at the door of the hotel, and was with us in a minute. Breathless with haste, he could scarcely articulate that hostilities had commenced! Our amazement may be conceived: at first we could scarcely believe him to be in earnest.

“Upon my honour,” exclaimed Major Wylie, still panting, and scarcely able to speak, from the haste with which he had flown up the hundred steps, “it is quite true; and the troops are ordered to be in readiness to march at a moment’s notice; and we shall probably leave Brussels to-morrow morning.” 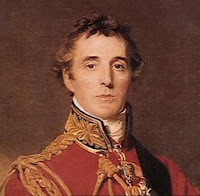 In answer to our eager inquiries, he then told us that this unexpected intelligence had only just arrived; that he had that moment left the Duke of Wellington’s table, where he had been dining with a party of officers ; and that, just as the dessert had been set upon the table, a courier had arrived, bringing dispatches from Marshal Blucher, announcing that he had been attacked by the French, but although the fighting was hot, it seemed to be Blucher’s opinion that it would most probably be nothing more than a mere skirmish.

While the Duke was reading the dispatches, the Prince of Orange, General Mufflin, and some other foreign officers had come in. After a short debate, the Duke, expecting that the blow would be followed up, and believing that it was the enemy’s plan to crush the English army, and take Brussels, immediately ordered the troops to be in readiness to take the field at a moment’s notice.

“And when did all this happen? when was this attack made?” we anxiously inquired.

“It took place this afternoon.”

“This afternoon !” I exclaimed, in astonishment, and, I suppose, with looks of consternation, which drew a good-natured smile from Major Wylie, for we had not been used to hear of battles so near, or fought the same afternoon.

“Yes, it happened this very afternoon” said Mayor Wylie ; ” and when the express came away, they were fighting as hard as ever, but after all, it may prove a mere trifling affair of outposts nothing at all.”

“But are the French in great force? Where are they? Where are the Prussians ? How far off do you suppose all this fighting is?” were some of the many questions we asked.

The fighting was in the neighbourhood of Charleroi, about half a day’s march from Brussels; nothing certainly was known of the force of the French. In fact, nothing at all was known, except that the French had this very day attacked the Prussians, when they were totally unprepared, at a short distance from us.

“However, after all, this may end in nothing,”said Major Wylie, after a pause; “we may have to march to-morrow morning, or we may not march these three weeks, but the Duke expects another dispatch from Blucher, and that will settle the business:” 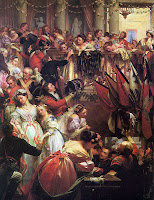 And so saying, Major Wylie went away to dress for a ball. Yes, a ball ! For the Duke of Wellington, and his aides-de-camp, and half of the British officers, though they expected to go to a battle to-morrow, were going to a ball to-night, at the Duchess of Richmond’s; and to the ball they did accordingly go. They seemed to say, or to feel, with the Scottish Chief in Douglas:

Tills night once more
Within these walls we rest; our tents we pitch
To-morrow in the field. Prepare the feast!
Free is his heart who for his country fights:
He on the eve of battle may resign
Himself to social pleasure: sweetest then,
When danger to a soldier’s soul endears
The human joy that never may return.

Would you like to have been in Brussels on June 15, 1815?
What do you think it would have been like to attend the Duchess of Richmond’s ball?

Visit my website and enter my contest! Next prize (to be chosen today!) is my RITA winner, A Reputable Rake. So hurry.

I’ve been to Brussels several times in the last few years but never thought it might have been (or is) such a thrilling city! In this page you posted today it quite seems a fascinating setting for very charming stories…I’m sure it is the fascination of the time the story is set in, nowadays it has turned into just an ordinary modern city. A very long premise (sorry!)to say, YES I’d have loved to be there!

I think I like Bruges better, more romantic. But your post makes Brussels seem very intriguing. I’d love to be a fly on the wall at that time. Just don’t ask me to dance.

I think Brussels would be amazing at that time or really anytime. I’m a big fan of Manikin Pis one of the statues in Brussels.

I can’t imagine the fear and excitement going on at the time. But really, I’m going to ball and then I’m going to fight? Doesn’t sound like a sound strategy to me.

Strangely, the movie “In Bruges” made me want to visit Bruges very much. 🙂 I hope to maybe get to Belgium in 2015! Anyone else planning to be there?

Maria,
The Brussels of 1815 must have been an exciting place. To “see” it through Charlotte Eaton’s eyes gave me a great desire to walk through the Parc of Brussels.

Enid, Charlotte mentions Antwerp but not Bruges in her memoir, but it sounds like its history is a lot older than 1815.

Here are some photos of Brussels, including Manikin Pis, Jane Austen (you naughty lady!)

The whole ‘fiddling while Rome burns’ comes to mind about the ball thing. How weird would that have been!

I have a Manikin Pis necklace…I was planning on Brussels for 2010…April….anyone?

Of course, they didn’t realize at the time the significance of the day. In 1986, I flew to London; we’d bombed Libia the week before. Everyone I knew who planned to go to England that summer canceled, but I knew it might be my only chance. I’ve never been sorry. It was fabulous. I also watched the cloud from Chernobyl float toward France when I found the opportunity to go there that same summer. I could have stayed safely in London, but again, it might be my only opportunity. So I went. I’ve never been sorry I did that either.

As to the ball, it seems frivolous and yet what better way to occupy one’s thoughts when mayhap death is at the door. All that could be done was done but for the waiting.

Thanks so much for sharing that excerpt, Diane. A bit of mini time travel. 🙂

I have a Manikin Pis necklace…
Jane Austen, does it work like those boutonnieres in the old cartoons, the ones that squirt water???

Judy, sometimes you just have to play the odds. Most of the time nothing bad happens….I’m glad you were brave enough to take advantage of the chance to see London and France.

About the ball…it was a strategic decision by Wellington in a way. There were Belgians who were hoping Napoleon would win and if Wellington canceled the ball, certainly word would have reached Napoleon and perhaps the French would have had an advantage at Quatres Bras. If that battle had not ended in a draw, perhaps Napoleon would have won at Waterloo.
Then we all might be speaking French.
Alors!

It’s just a sterling silver replica of Manikin Pis and he’s standing on an orb of amber….perhaps the amber is suppose to represent pee. I have no idea, but I collect charms from travel locations….

“I have no idea, but I collect charms from travel locations.”

I do, too! Nothing as nice a Mannikin Pis, LOL, but I do have a heavy charm bracelet with all my travel charms. I love it, it reminds me of wonderful places I’ve been

Amanda’s bracelet is very pretty. And full of charms.

What a fascinating post, O Divine One. I love reading things that put me there in the middle of history. It is my ambition to be in Brussels for the Waterloo anniversary in 2015. I will do whatever I have to do to make it happen. It is just such a pivotal event in the era that I love so much.

I can fully understand the reason the Duchess of Richmond’s ball was held. What a poignant, brave thing to do. I don’t know why, but it strikes me as elegant and chivalrous and one of those rare evenings when life and death stand side by side on the balcony and watch the mortals dance on the line between the two.

I guess this is the classic -Ah, to have been a fly on the wall – adage but I would have wanted to be more than a little fly.

I’d imagine the energy level would have been high. All those marvelous men in uniform, so many important people in one place and to have been able to get a glance of Wellington. That would have made all the difference for me to be able to meet such an intriguing man.

And to have a ball in midst of it all. Here you are in a potentially explosive situation and all the while ‘doing the pretty’ for the sake of the ladies who, in turn, were doing it for the sake of the men. Can you imagine falling in love that night? Talk about intense and delish! What marvelous fodder for my idea folder.