I always love reading biographies of independent-minded women writers in history! (Austen, the Brontes, George Eliot, George Sand, Emily Dickinson, etc–it’s very inspirational). This weekend I read Brad Gooch’s new biography of Flannery O’Connor. O’Connor was one of my favorite writers in high school, but aside from a class called “The American Short Story” in college I haven’t re-read her as much as Austen and the Brontes (which I re-read almost constantly!). This biography, though almost strictly about her life and with very little literary commentary, was fascinating and inspired me to take my volume of her short stories off the shelf again. 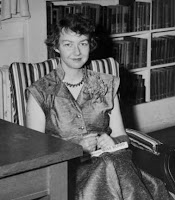 Flannery O’Connor, like almost all those other favorite authors I listed, was something of an eccentric, solitary soul, deeply devoted to her work and her own strange interior world. She had a relatively short life, dying at 39 of lupus in 1964, and the last 14 years of her life were spent mostly on the remote family farm in Georgia, but she was a writer of immense genius and originality. She wrote 2 novels, Wise Blood and The Violent Bear It Away, and 2 short story collections, A Good Man Is Hard to Find and Other Stories and Everything That Rises Must Converge (which won a posthumous National Book Award). My college textbook says “(the) texts usually take place in the South and revolve around morally flawed characters.” They could loosely be called “Southern Gothic,” in the vein of her contemporaries Faulkner and Welty, but they are unique and deeply flavored with O’Connor’s own devout Catholicism and struggles with illness.

For a writer of historical romance fiction like myself, O’Connor isn’t such a direct influence as Austen and the Brontes. Though she declared “Hawthorne said he didn’t write novels, he wrote romances; I am one of his descendants,” they are ‘romances’ in a very different sense (more in the grotesque, fantastical way of Frankenstein). But as I re-read her most famous story, “A Good Man Is Hard to Find,” I realized O’Connor is a great teacher of craft. Nothing could be added or subtracted from this story; the visual details and rhythm of the dialogue paint a whole world. And the sense of sustained foreboding is equaled only (maybe) in James’s Turn of the Screw. It never falters. The same can be said of stories like “Good Country People” and the gorgeous “Revelation” (written partially from her deathbed. Determined to finish her Everything Rises… collection even as her body failed her, she set up a typewriter on a table by her bed, and would sleep for an hour and write for an hour until it was done. A lesson in artistic determination!).

There’s a great website on O’Connor’s work here, and her home at Andalusia is open to visitors, and I would love to visit there someday! (I would also love to visit Haworth Parsonage and Chawton, in hopes of soaking in some inspiration. Maybe we need to get together an international writers’ tour…)

Who are some of your unexpected influences and favorite writers? Whose life story do you find intriguing?

(BTW, on my own blog yesterday’s “Hottie Monday” was a Mr. Darcy edition! Be sure and stop in to vote for your favorite Darcy…)

Great post. It’s hard for me to nail down influences I think there are so many. I think I’ve been touched by all the great stories of my youth. Definitely some of the great short stories. Now I want to re-read this. What an interesting and too short life.

In college I was enthralled by DH Lawrence – Lady Chatterly’s Lover, Women in Love, Sons and Lovers – I think it was the blending of sexuality with romance…anyway, I was doing an independent study on Lawrence. I never got very far because the university closed in the wake of the Kent State shootings…

Probably the very first book I fell in love with was Little Women. But the biggest influence, I must say, would have been “Carolyn Keene” of Nancy Drew, and “Helen Wells” of Cherry Ames. I learned to love books through Nancy Drew and Cherry Ames.

Cherry Ames is back!! The books are being reissued in the original format
http://tinyurl.com/lelmw4

Oh, fun!! I missed Cherry Ames when I was a kid–maybe I need to make up for that now. 🙂 I did love Nancy Drew, though. Maybe she’s the reason I enjoy intrepid heroines so much.

Write now, oddly enough, Jane Austen and Melissa Nathan are my biggest influences. I’m trying to do an update of Northanger Abbey because I’ve never read one and thought it would be fun. A great deal of NA fits with today as long as you change some things. Instead of being obsessed with gothic romance and murder by heroine is obsessed by art theft and mythology. So basically I’m mocking on those Dan Brown and Dan Brown wannabe books. Which I think totally deserve mocking. I also use Stendhal Syndrome which is where you faint in the presence of great beauty…normally art and normally the David by Michelangelo. My title is “Fainting Over Dafydd”. I’m still working on it, but I think it would make Jane and Melissa proud.

“My title is “Fainting Over Dafydd”.”

LOL! Love the idea of an updated NA 🙂

I love Flannery O’C, too, haven’t read her for years, though.

As for unexpected influences, I’d say noir, because the authors take risks I would like to be risky enough to take myself.

And Diane, I wrote one of my senior theses on DH Lawrence’s The Rainbow. Yes, the paper was a snoozefest, but I liked him too.

I look forward to your blog each week though I have never commented before. Loved the harem art work. Fascinating stuff.