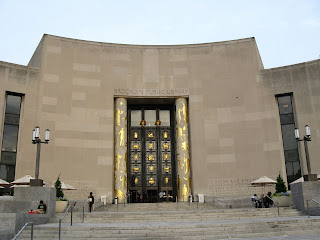 This week, my local library system announced that the city’s budget will allow for libraries to remain open six days a week. Whew!

One indicator of the current economy has been the massive upswing in library use; people who’ve been laid off are heading to the library for internet and computer access, people aren’t buying books as much, kids need a place to go if their parents’ jobs have changed or their caregiver has had to go to work again.

And, of course, library budgets have been threatened because of the economy.

So when the Brooklyn Public Library asked for donations to help keep the library’s doors opened, I ponied up what I could and crossed my fingers. Where else can I get a steady stream of new books, DVDs and books for my son? Judging by the amount of traffic I see going into my local branch, and by how many people wanted The Reader ahead of me (hurry up, all 327 of you!), I would say the library’s usage is thriving. So I was hoping the membership would also hear the call. And the city’s mayor, not a stupid guy, made sure the library was taken care of in the budget. Again, whew.

The library is a great leveller; people of all ethnicities, age and gender congregate there. And while you might think the one thing they have in common is literacy, that is not always the case; my son and I spent many hours there before he could read.

I know from our books that the library in Regency times offered some of the same services, subscribing to the papers so people didn’t have to pay for an individual subscription, getting the latest ‘horrid novel’ so a young lady needn’t spend her pin money on it. 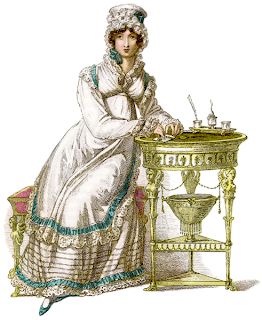 How about you? How has the economy affected your town or city’s cultural spots? Do you visit the library as often as I seem to? What is your secret library tip (mine is to get cookbooks out of the library first to test-drive the recipes; that way, if you like the book, you can buy, but cookbooks can be super-pricy, and you’re not sure you’ll like until you try)?

PS: The top pic is the main branch of my library, which is just gorgeous.

Megan, we have a small new branch of our library that just passed its first anniversary. Our library system was also talking about cutting hours. Some libraries have cut personnel. Burns me up. For people looking for jobs, it is almost impossible without computer access and lots of people depend on libraries for that.

Librarians also spend an insane amount of time showing job seekers how to find job postings online, how to fill out online application forms, and how to sign up for free e-mail accounts (like Gmail or Yahoo). This is why a lot of libraries have set up whole “job centers” for public use. Because so often the people walking through the door don’t just “need” the Internet access. They need instruction as well.

At this point my library doesn’t have final word on our budget – which will all boil down to what the state of California is going to do. And given that California is basically screwed at the moment, the outlook isn’t exactly uplifting. But we’ll muddle through. Somehow. We always do.

Wheee! I’m in the NYC public library in the Rose Main Reading Room at this very minute. I’m finally able to access the free wi-fi today for some reason. I’ve been trying all week. Not sure if this is a good thing for my word count progress!

I’m here in NYC trying not to think about California. DH works for the State University system and it’s a day at a time right now.

My daughter is adjusting to the rigors of the dance program at ABT, and as she puts it, “Having her horizons expanded” in NYC.

Megan, I e-mailed you at your website in case you don’t check that very often.

Well, back to work,
Jane

I LOVE libraries. I have been pretty much indifferent to seeing my book on shelves in bookstores–it’s nice, but it doesn’t do that much for me–but I was really excited to see my book in the library! Particularly as I had gone through a very baroque process to get it in there.

Jane, congrats on your daughter getting into ABC–how wonderful!

Wendy, thanks for commenting! You are such a great liaison between libraries and us readers. Amazing that people in your position help patrons out as much as they do. Yay for you guys.

(And Jane, I emailed you back).

I work casual p/t at my local libray and yes, for sure, we have seen an increase in traffic. And since my dh and I have also cut back, I also use the library way more than I have in years – it’s pretty easy to find books to read when you’re there at least 1 day a week (if not more).

Our public computers often have wait lists and we’ve helped people with job search stuff. DVDs are also really popular and some people are in three or four days a week (and that doesn’t count the usual regulars).

Thanks for posting this 🙂 Libraries everywhere are facing cuts and increases in demand for their services. Public awareness is very important. I’m glad your library system was able to find the money to stay open six days a week!

Hee-hee, this reminds me of a comment my manager made at my former day job. I remarked how wonderful it was that our town was building a new library, but I hoped the budget contained money for books. (A neighboring town built a gorgeous library but there are NO books!) To which she replied, “Only poor people use libraries.”

I think I stood there gaping like a fish. I’ve always operated under the assumption (delusion maybe) that public libraries are the cornerstones of a civilized society. And it wasn’t much different when I showed up to a mom’s group get-together with a library book under my arm. One of the moms spotted the tag and said, “Oh, how quaint.”

In some respects perhaps an economic downturn have have its upside.

Jane:
You’ve just described what I’ve seen at my job. We are a large county system, so we have libraries in a variety of communities. Our more “blue collar” libraries haven’t seen that much increase in circulation. Why? Because the library has always been seen as “vital” to their community. The people in those communities use the libraries ALL the time, not just when the economy is crappy.

It’s our libraries in our more affluent communities where circulation has soared. In some cases, nearly doubled!

Yay for libraries!! They’ve been my favorite places ever since I can remember. 🙂 I personally have not been using the local library any more than usual (I usually have to go by there once a week or so anyway), but I have noticed wait lists on books I want have gotten longer and there are even bigger crowds than usual.

The Seattle library system is facing massive budget cuts (like everything else of its kind–I work at a publicly funded hospital, and FY10 is NOT going to be pretty around here), but they’ve found a way to avoid cutting branch hours or reducing the collections budget. The executive staff are taking a pay cut, they’re extending the life cycle on things like staff computers, and the libraries will close for the week before the Labor Day holiday, when usage is historically low.

I’ve always used the library a lot. If I don’t expect to re-read a book, I’d just as soon request the library to purchase it. They almost always buy anything I request, especially with popular fiction–they don’t seem as interested in developing the best Wellington collection west of the Rockies for some odd reason. 😎 And they buy 4 or 5 copies, instead of just one, so I don’t feel like I’m hurting the author’s bottom line.

I usually go once a week–sometimes a quick breeze in to pick up my holds, other times taking my daughter and letting her play in the children’s area and pick out books of her own. And I just discovered a recently renovated branch a little further from my house than “my” library has lovely study rooms, so sometimes when I need quiet time to write on the weekend, I’ll take my laptop and hole up there. Quieter than Starbucks, and I don’t have to buy a latte to justify my presence!

I was at a green conference all day or I would have commented sooner. Of course I would! I’m a librarian.

I think libraries are great places and librarians do so much more than read books. We’re a jack of all trades and we actually master quite a few. Today at the conference I was talking about libraries and how groups need to work with them. Libraries are willing to work with other groups.

The thing I love about librarians is that they agree to a lifetime of learning. Libraries are great and we should shout that to the rooftops!

Libraries are some of my favorite places on earth. I spent a large part of the first four years of my school days in the high school library because they didn’t quite know what to do with me in the classroom. The library was my sanctuary. I wasn’t weird or a nerd in the library. It was home.

Here in our small Alabama town the library is always busy. I guess there are lots of poor people here, Jane! And yes the waiting lists have gotten longer since the economy took a downturn. Fortunately the town supports several fundraisers for our library so we haven’t had too many money worries yet. I’m very fond of our little library as it is the first venue in which Louisa Cornell went public with a talk on what it is like to be an aspiring romance writer. They’ve already decided that I have to do my first book signing there. See, I really need to get published because I don’t want to disappoint all those wonderful people who support our library!

Hi,
I sent an email, twice, I hope you get it… Don’t know where they go!

Our library has been cutting hours and personnel, I think they buy less books too….

When I was a young girl I spent many hours at our local library and borrowed lots of books. When my children were young again lots of time was spent at the library they had book reading times for the young kids and they even had a toy library which was great I had 4 kids and each week they would borrow a new toy for the week and of course books.
Knowadays I don’t go to the library they carry very few romance books here in Australia so I still buy them and kinda have a very small library at home LOL