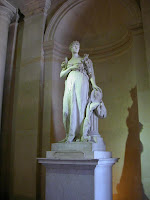 Empress Josephine Bonaparte was born on this day, June 23, in 1763 as Marie Josephe Rose Tascher de la Pagerie on the island of Martinique! Over at my own blog I had a short general bio on Saturday, so I thought here I would concentrate on one aspect of her very complex life–that of Style Icon. And she was very stylish indeed–what else could we expect from a French/Caribbean empress? đź™‚ Even though her appearance was mostly said to be sort of average (average height, brown hair, hazel eyes–though some said brown and some said green, a good nose, and bad teeth) she knew how to dress to emphasize her good points and detract from her bad, and how to make herself seem graceful and elegant.

To help me out, I pulled books down off my shelves and looked up anything I could find that talked about Josephine’s clothes or fashion sense or use of cosmetics. Here’s just a few of the quotes I discovered: 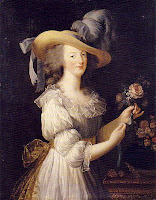 In her youth as a young, aristocratic French bride in Paris:
“The forces of fashion conspired in Rose’s favor. The panniered dresses and terrifying hairstyles that had prevailed on her arrival in France were now somewhat demode. In their place came a style that suited Rose much better. The new look was captured in Vigee-Lebrun’s painting of Marie Antoinette which had caused such a sensation in the salon of 1783. It featured the Queen in a straw hat and simple white gown, reminiscent of the plain muslin dresses favored by Creole women on Martinique. Rose looked charming and felt comfortable in this new style. At last her native style was seen as an asset; at last she could feel confident in her femininity and in her burgeoning sexuality.” (Stuart, 78)

“Describing her during this time one old acquaintance wrote ‘That lady, without being precisely pretty, nevertheless was attractive because of her style, her gaiety and her good heart’.” (Stuart, 93)

“She perfected a style of her own, of notable graceful movements and gestures and a seductive walk to match her native langurous manner. With a will that would be of iron, she effected a physical transformation, too, schooling herself into a new slender body. Her arresting voice, with its slight Creole accent filleted of r’s would always be her greatest asset, low and silvery, ‘like a caress’ Napoleon would say of it” (Bruce, 27)

“(Lady-in-waiting Madame de Remusant) was struck by Rose’s charms. ‘Her figure,’ she later recalled, ‘was perfect, her limbs were supple and delicate, all her movements were easy and elegant…full of grace rather than beautiful and with an expression of indescribable beauty’.” (Bruce, 56)

The scandalous Directoire years as one of the notorious beauties known as ‘Merveiluses’:
“She had metamorphosed into a glittering butterfly who flitted with ease through this illustrious company. Both sexes found her seductive and gracious. Men admired her amber eyes, her flawless skin, the perfection of her arms, the sensual aura that radiated from her person. Women enjoyed the sweetness of her manner.” (Stuart, 199)

In Milan with her new husband Napoleon:
“Initially Josephine’s friends were a shock to Milan. Journals complained of their ‘immodest behavior ; arms, bosom, shoulders, all are uncovered. The arrangement of their hair is a scandal–sown with flowers and feathers, and the whole crowned with little military helmets from which locks of untidy hair escape. They even have the effrontery to dress in tunics revealing legs and thighs barely hidden by flesh-colored tights. Their manners match their clothes: arrogant talk, provocative looks, and meat eaten on Fridays.” (Bruce, 183) 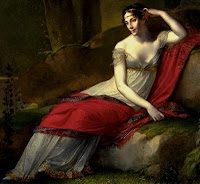 As First Consul’s wife:
“He (Napoleon) was particularly keen to encourage the use of French silks and velvets, rather than the popular muslin, which was imported via England. The vogue for shawls was another example of the Consulate push for female propriety. Popularized by Josephine, the shawl replaced the fan as the must-have accessory of the period. It was usually handmade from cashmere, and it became an essential luxury item that could cost a fortune. One beautiful shawl that the First Consul presented to Josephine cost over 10,000 francs.” (Bruce, 269)

Coronation, December 2, 1804:
“At six o’clock Isabey had arrived to paint Josephine’s face and to oversee her robing. Her hair was transformed by her coiffeurs into a mass of shining chestnut ringlets, and a diadem of pearls interlaced with diamond leaves was perched atop. Then her ladies helped her into a long-sleeved gown of white satin, embroidered with gold and silver. Its bodice was cut in a low square on the bosom, with a small collar of lace rising from the shoulders and encircling the neck, and its full skirt and long train were embroidered with golden bees. Her necklace and earrings were carved gems set in diamonds and on her finger she wore a ring with a ruby, the symbol of joy.” (Stuart, 323)

As Empress:
(when she made her first official appearance as Empress): “That day she was particularly radiant, noted one observer. ‘She appeared in bright sunshine attired in a robe of rose-colored tulle, spangled with silver stars and cut very low according to the fashion of the day. Her headdress consisted of a great number of diamond wheat-ears, and this brilliant attire, the elegance of her bearing, the charm of her smile, the sweetness of her countenance, produced such an effect that the Empress outshone all the ladies of her suite’.” (Stuart, 316)

Her influence on Imperial style: “The result was a melange of Greek purity and European sumptuousness, mingling the neoclassical aesthetic with the revival of interest in the Middle Ages, known as the ‘troubador style.’ Hence the preference for embroidery and the raised lace collar that had become part of court dress. The grace with which Josephine wore these grand costumes belied just how uncomfortable they were; stiff and heavy.” (Stuart, 336)

In conclusion, “As one of history’s great style icons, Josephine’s influence on the way an entire generation wanted to look, dress, and behave cannot be overstated. Her every action and nuance of appearance were followed eagerly by newspapers and journals in France and abroad. She was the high priestess of style, and fashion-conscious women the world over idolized her.” (Stuart, 335) Today, she even has a Barbie in her image!

What do you think of Josephine’s style? (I could do without the immense gold-embroidered dresses and velvet trains, but I do love cashmere shawls!). Who would be a comparable style icon today (Princess Diana, maybe? But I can’t think of anyone more recent…)