Wellington (or Diane’s Poor Excuse for a Blog) 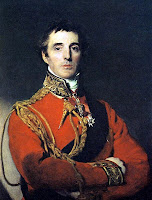 I just returned from a weekend out of town and I’m still chasing that deadline I mentioned a few weeks ago, so I don’t have time or brain-power to do a clever blog. So it will be “Picture Day” today. I’m not doing any research or checking any facts so I might not be 100% accurate in what I say here.

As a certified Wellington Groupie (Kristine Hughes is the founding member) and in continuing honor of the Waterloo Anniversary, I thought I would simply share some of my Wellington-related photos and thoughts. 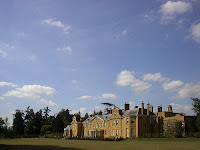 When I first fell in raptures about Wellington (or dear Artie, as Kristine calls him), it was at Stratfield Saye, Wellington’s country house. Of all the houses we saw on that 2003 trip to England, Stratfield Saye seemed the most like it was a home. It was a home. The present duke’s son and his family live there, but you could feel the first Duke there in every room. In an outer building there house was the funeral carriage that carried the Duke’s body through London. A recording played of all his honors, as had been read out during his funeral. I realized that this had been a truly great man. 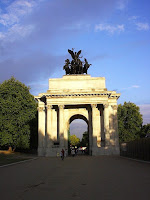 On that trip we also got to go up to the top of the Wellington Arch in London, and of course we toured Apsley House, also known as Number One London. Apsley House felt more like a museum than a house and well it should. It was filled with wonderful art and artifacts.

Also in London we visited Lock and Co, a Hatters shop that has been in Mayfair since 1676. On display there are Wellington’s and Nelson’s hats, instantly recognizable.

I don’t claim to be an expert on Wellington. I’ve just read one biography (and can’t remember which one it was), but I think of him as a man with great integrity, courage and honor. As a boy he didn’t show much promise, but his mother sent him to a military academy in Europe (near Waterloo, I think) and he found his strength. As a military man he understood how to use his resources, he was clever, and he was brave. He rode the battlefield during Waterloo, was everywhere he could be and ignored the danger to himself. He cared about his men. One of my favorite Wellington quotes is: “Nothing except a battle lost can be half so melancholy as a battle won.”

He was not a good husband, although he felt honor-bound to marry his wife, because she thought they were betrothed and had waited for him while he served in India. He had many dalliances throughout their marriage and one has to wonder how his wife felt as this man grew in greatness and increasingly left her behind. His sons could not match his success. Who could? I like this quote from his son after the Duke’s death, “Imagine what it will be when the Duke of Wellington is announced, and only I walk in the room.” 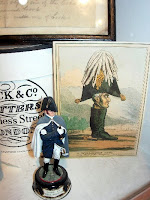 The Duke was a man who was very sure of himself and his opinions. I suspect he had a big ego, but he also had a sense of humor. In the display at Lock and Co. was a little caricature of Wellington, making fun of the term Wellington boot for the style of boot he favored. At Stratfield Saye there was a room papered with hundreds of caricatures of the Duke, which I thought was akin to a writer papering a bathroom with rejection letters. The boot one was was there, too.

What is your opinion of the Duke of Wellington? Pro and Con. Any favorite quotes or vignettes of his life?

My website has been updated and my contest is still running…I’m just saying.

Kristine left this message on our Anniversary of Waterloo blog Jane – Here’s a link to a re-enactment society. Perhaps they’d be a good place to start re:staging the Duchess of Richmond’s Ball. As I get further into making my plans, I’ll post here if I find any other likely suspects.
But, Kristine, the link did not come through. Can you re-post?

I must admit that my knowledge of Wellington is very lacking. I just tried to read a bit about him, but the webpage was very confusing.

I do own a pair of Wellington boots. I wonder what Wellington the man would think of the boots now becoming a fashion statement with houndstooth and giraffe designs on them. I bet her never saw that coming.

I believe my feelings about the Great Duke are well-known on this forum. 😉

That said, I wasn’t always as enamored of Wellington as I am now. When I first started seriously researching the Napoleonic Wars, I went in biased against him because I’d picked up a sort of caricature of a cold-blooded, unfeeling elitist, and I knew his political views were, to say the least, not the ones I would’ve held had I lived then.

But he won me over. As I delved deeper into history, I realized how much of the Wellington I thought I knew was pure caricature, and the more I saw of the real man’s intelligence, honor, courage, snark, and sheer military brilliance, the better I liked him. When I started on my alternative history WIP, I knew I’d have to include him, but I meant to keep him and all the other major historical figures in the background. My protagonist was going to be an Everyman. But I still needed to know more about Wellington, so I started in on his biographies and even his dispatches…and by the time I’d finished Jac Weller’s trilogy (WELLINGTON IN INDIA, WELLINGTON IN THE PENINSULA, and WELLINGTON AT WATERLOO) and the first half of Elizabeth Longford’s wonderful biography (WELLINGTON: THE YEARS OF THE SWORD), the man had taken over my book!

I still find his elitism and many of his political views appalling…but he’s also a useful reminder that one can find honor and an honest desire to serve one’s country’s best interests on more than one side of a political question. In the heat of present-day political battles, I can easily forget that.

Oh, yes, Susan! You and Kristine and I are destined for a three-way duel.

I think “elitist” is the right term. And I certainly agree about Wellington’s politics, especially regarding the Irish. I hesitate to learn too much about that lest I see my lovely Regency tarnished.

It is IMPERATIVE that you get your alternate history published. Because I want to see it in print. And read it!!!

Jane Austen, I am not a Wellington scholar by any means. Mine is an impression of the man based on not much! Just what I said in the blog.

I didn’t mean your post was confusing. I meant another webpage I went to that was dedicated to Wellington was confusing. I was trying to learn more about the man so I could post an intelligent comment.

Jane Austen, I never thought you meant MY post was confusing…although that was always a possibility.

And please don’t feel you have to be intelligent for me. I can’t take the competition!!

It is IMPERATIVE that you get your alternate history published. Because I want to see it in print. And read it!!!

From your mouth to God’s ears!

I feel like I’ve finally got the plot right, and I’ve made it my goal to finish my current draft by 8/31, spend a month and a half editing and polishing, and have it ready to submit by mid-October. I’m going to the Surrey conference just outside Vancouver again 10/22-25, and I’ve got an editor appointment and a chance to touch base with an agent I met last year. On days I don’t feel like writing, all I have to do to get motivated is look at the calendar!

I honour Wellington the leader of men. I read his dispatches [background for my own Regency stories] and have to admire his determination. He was not just fighting the French, he had almost as much aggro from the British government… I live just up the road from Stratfield Saye and always say hello to Wellington on his column as I drive past. He was a truly great man.

How neat to live so close to his home, Beth! I would love that.

My father was a huge military history buff, especially of brilliant strategists and commanders. Wellington was one of his favorites so I learned about the great man at an early age. I think his politics and elitist views while appalling also make him very human.

He had courage, wit, and brains and tried his best to live an honorable life. As with all of us he had flaws, but overall I think him a true hero and a person to be admired.

“the boots now becoming a fashion statement with houndstooth and giraffe designs on them.”

LOL–mine have Hello Kitty on them! Wonder what he would think of those?

Diane, I also remember Stratfield, Apsley House, and the Wellington Arch! I didn’t get to revisit any of them last year, but I did drive past the arch and Apsley H. at night, all lit up.

I always love to check out the authors who post comments on Riskies and I’m so glad you did. I have not seen you before, but am super interested in your books. I’m especially interested in “In All Honour” I really like the in love with my best friend’s fiance plotline. I just like the longing and then when they get together it’s so sweet. At least in Regencies like that I have read. I guess it’s a little like that in Persuasion (one of my favorite novels…go figure). Anne longs for Wentworth, but he is flirting with Louisa a near relation and good friend. And secretly Wentworth is longing for Anne (at least he is in the versions I’ve read from his point-of-view). My only complaint is, it is not easy to get your books here in my hometown of Knox, PA. I will keep looking and hope I find one. I am eagerly looking forward to it.

Beth, how nice of you to stop by. I’m all envy that you live near Stratfield Saye! I loved everything about the place.

Amanda was right there with me through all of the Wellington part of the tour. It was at the beginning of the tour and so was even more exciting.

I’ve become a bit of a Wellington groupie, too. One thing that impressed me as I read about his time in India was the account of how he dealt respectfully with the Indians. Not a perfect man but admirable in many ways.

Keeping my fingers crossed for you, Susan!

Thank you for so many kind comments. I’ll say hello to Wellington for you all when I next go past his statue.

I just broke down and bought both of your novels for the bargain price of $55.21. I am sure they are worth it. I am early anticipating their arrival from the UK. I will let you know what I think. Is there a way to contact you beyond this blog? My email is mrdarcyatpemberley@gmail.com