Well, my Christmas In July Writing Extravaganza is almost over (yay!). The Christmas Regency novella (a Diamonds of Welbourne Manor spin-off, watch for it next year!) is done and being hacked into shape, and my goal is to finish the Elizabethan Christmas “Undone” story before I leave for RWA on the 14th. (Maybe if I post this goal here, it will come true). But after trying to think about presents and carols and snow in the middle of 4th of July fireworks and 95 degree weather, my brain is tired. Or maybe just lazy. Either way, it’s hard to think of a good blog topic. So here, in no particular order, is a list of What I’ve Been Thinking About Lately (besides Christmas…)

1) TV. I have only very basic cable, so I am always late to TV show parties. Mad Men, Deadwood, etc–I had to wait for Netflix, but now I love them. And right now I am loving True Blood. What a crazy, wacked-out, fantastic show. It sort of reminds me of the sadly-departed Deadwood in that it has a similar dark, gritty atmosphere of weird humor mixed with the gore (even though the settings are very different). But now I have to wait for season 2. (Please tell me there is more Eric in season 2!!!)

2) Sports. I’m not much for sports usually, but there are 3 I enjoy–soccer, bicycling, and tennis. Lucky for me I’ve had 2 out of the 3 in the last week! The Tour de France started, and despite the return of Lance Armstrong (and the fact that he finished a surprising 3rd place after Monday’s stage 3, and has an entirely undiminished ego) my money is still on his Astana teammate Alberto Contador.

In tennis, of course, there was Wimbledon. Despite the fact that my true love (one of them, anyway) Rafa Nadal was not there, that Federer/Roddick match was a classic. 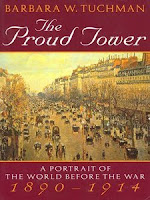 3) Books, of course! I’ve been reading Barbara Tuchman’s The Proud Tower: A Portrait of the World Before the War, 1890-1914 (thanks to Andrea Pickens’s excellent rec!). I’m only about 1/4 of the way through right now, but I have to say the first chapter, “The Patricians,” is an excellent portrait of the old aristocratic mindset and responsibilities and privileges. Dukes, earls, marquesses, etc simply did not look at the world like everyone else, and it’s a good thing to remember when creating such a hero. (And I loved the anecdote about the fiery 1st Marchioness of Salisbury, who was responsible for revitalizing the ancient Cecil line, which had gone downhill since Elizabethan times, and who hunted every day until her death at 85, despite being blind and having to be tied to her saddle. A groom would ride beside her, and shout out when she approached a fence, “Jump, dammit, my lady, jump!” And her beautiful daughter-in-law, the 2nd marchioness, had the Duke of Wellington as a devoted admirer. He gave her flags captured at Waterloo to hang in the entrance hall of Hatfield, and wore the coat of the Hatfield Hounds on campaign).

For fun, I’m reading a YA novel by Jacqueline Kolosov, The Red Queen’s Daughter, about Mary Seymour, daughter of Katherine Parr and a magician. (The real Mary probably died in infancy, after her mother’s death in childbirth, though no one knows for sure. In this story she grows up, finds her magic, and goes to the court of Queen Elizabeth). And I just finished our own Risky Carolyn’s My Forbidden Desire, which I stayed up until after 1 in the morning to finish (even though I had work the next day!). Go and read it right now!! (Though Carolyn tells me the next story is not the one I was hoping for, but that’s okay–for now).

4) The RWA conference! It’s impossible to pack light for this, but this year seems more ridiculous than ever. One costume (for the Beau Monde Soiree Wednesday night) along with all the accessories, plus 3 evening gowns, plus 4 day dresses, plus some casual stuff, plus shoes and bags and jewelry. My luggage is taking on Duchess of Windsor proportions here. But I can’t wait to be there!

And BTW, if you are going to RWA be sure and join us (the Riskies) for a drink on Saturday afternoon at 4ish, in harry’s Pub in the Marriott…

What are you thinking about today?

There’s more Eric in S. 2 but his hair isn’t as good… (and despite massive red herring in last episode of S. 1 there is more Lafayette, hooray). I’m really enjoying True Blood, but, waaah, there was no episode last Sunday!

I’m in a panic over Natl too and I don’t even have to pack since I’m commuting from home!

“(and despite massive red herring in last episode of S. 1 there is more Lafayette, hooray”

Oh, good! He is hil-ar-ious. 🙂 One thing I don’t like so much is the way an inordinate amount of time is sometimes spent on characters who are not nearly as interesting as the producers seem to think. But it’s worth it to wade through them to get to the good stuff.

Congratulations on finishing the novella, Amanda!

My husband and I are into True Blood, too. Amazing how some characters just capture your imagination. I felt that way about Lost, but after two seasons I *lost* interest…

My favorite show Clean House just did the messiest house in the country. It was fascinating to see the psychological dynamics of hoarding behavior in the home owner. And to see the enormity of how much stuff a person can cram into a house.

I’m reading Arabella by Georgette Heyer, just to take me to a pleasant place for a few minutes.

I love True Blood! Its so much fun, the crazy cast of characters and how they use classic melo-drama but still manage to make it work.

Madmen depresses me a little. I love it, but I always know I’m heading into a fairly realistic interp of a lot of peoples lives. At least 50 years ago.

And finally. I’m not going to Natl this year! Waaaaaah. I’m rampantly jealous of everyone who packing madly right now. 😀 Have a marvelous time.

I am wondering if I really want to watch Confessions of a Shopaholic. I know they changed the plot line and I really loved the book. I do really love Hugh Dancy as well though so I’d like to see it. Especially since the previews had that adorable shot of him looking upward.

I’m also reading Lord of Scoundrels for the first time. I saw it on the blog and thought well if it’s on most people’s must reads Regencies I have to read it. So far I really like it, which is strange because I do like clean cut men, however there is something about the way Loretta writes that just makes the characters so real I have to like them.

I’m about to launch into some PG Wodehouse I bought at The Strand. Believe it or not I’m a Wodehouse virgin. I look forward to meeting Bertie Wooster and Jeeves.

I expect all of you ladies going to National to be dressed to the nines!
I decided today to attend the PNWA Conference in Seattle. My YA managed to final in their literary contest. So I’ll get a conference of some sort but it won’t be the glorious fest that is National!

Lucky you, Jane, to have so much Wodehouse to read!! I like to pull out “Right Ho, Jeeves” when I need to be cheered up. 🙂 And be sure and let us know how the PNWA conference goes!

I’ve started a pile of books and things to pack for RWA in the middle of my bedroom floor, but it just keeps growing and growing…

I’m thinking I cannot wait for this day to be over, it is the worstest EVER.

Oh noes! I hate the bad days. Too bad you’re not here–we could have pomegranate martinis and watch some TB. There’s probably chocolate around, too.

My hubby is on vacation and keeping me busy, LOL. I’m not getting all the reading I love to do done. But we are getting some organized done here. So I’m not getting on til late. I rarely watch any TV but keep the TV on the Game Show or TV Land! Even when I read, I like to see something around me so I don’t feel along (it can be hard not hearing nothing and be alarmed too much when I don’t have things ‘moving’ around me.

Great on the Christmas Regency novella done. Is that going to be an Anthology of you 4 again at that setting? If so I’m thrilled. I so want to visit there again!

Hellom Caffey! No, this is just the regular Christmas anthology they come out with every year–I’m not even sure who the other authors are. 🙂 But I did love the “Welbourne” characters and wanted to see what happened to some of them (the others will have more stories later…)

I simply adore True Blood as well. Might even go and read the books, if I can afford to. More Eric for you in Season 2!