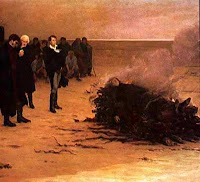 Even his death was unconventional and appropriately mysterious. He drowned in a boating accident, and allegedly foresaw his own death. When his body was cremated his heart did not burn, and Mary Shelley kept it for the rest of her life. (Eeew.)

And now onto Dame Barbara. She wrote some romance novels (which is like saying Shelley was a great poet). But did you know she was also a recording artist? In 1978, she joined up with the Royal Philharmonic Orchestra to produce her first and (thankfully) only album, Barbara Cartland’s Album of Love Songs. 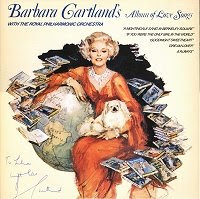 Now, whatever your opinion of her as a writer (I’m saying only that it’s a taste I have yet to acquire), the lady can’t sing. Not many people in their 70s can, even if they could before. And the songs–helping upon helping of silken strings, swelling harps, throbbing woodwinds, angelic back up vocals; as the musical spouse commented, “Vaughan Williams in a whimpering mood.”

A woman must seek all her life until she finds in one man the complete perfect love which is both human and divine. Any sacrifice is worthwhile when one knows the ecstasy, the glory, and the irresistible fires of love.

And if you think her breathless, posh voice for the spoken word is bad, just wait until she sings. What was her arranger thinking? All that I could stand to listen to was way out of her range (if she even had one). How Deep Is the Ocean is particularly bad. Yes, these songs are available for your download and listening pleasure at WFMU, with a review that is less than polite (and with some entertaining typos).

So what do Shelley and Cartland have in common? A lot to answer for, in my grumpy opinion. Shelley made it okay for male writers to behave badly; and Cartland left romance writers an unfortunate legacy. In other words, the cult of the writer-as-personality. But with Shelley it wasn’t just image (Byron, now, is another matter)–he was a passionate, visionary, uh, nutter, who honestly believed in free love and radicalism. Yet his callous horndogginess certainly had repercussions–none of the women with whom he was involved escaped with heart, or even life, intact.

Whereas the Cartland legend–all that pink, pink, pink, the glamorous trappings, big hair, lapdog optional–it’s still with us. I think the Internet has made it even worse–here we are, all over the place, feeding out bits about ourselves on Twitter (yes, I do), Facebook (no), blogs (here I am), and so on… and I’m wondering how much promotion is too much promotion, and how fascinating our lives as writers and all round nice people really are. 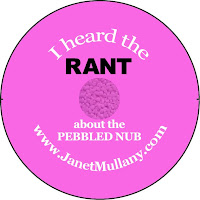 What do you think Barbara Cartland or Shelley would have done with the Internet if they’d had access to it?

Meet (most of) the Riskies for more opinionated rants on Saturday, July 18 at 4:00 at Harry’s Pub at the Wardman Park Marriott, and, yes, I will have these buttons available on my other favorite rant topic–the pebbled nub.

I think Dame Barbara would have turned her nose up at the internet since it is for commoners, and definitely not pink; Shelley, OTOH, would have lapped it up, I think.

And thanks for the item about the Cartland record! I am listening to it now, WFMU is my favorite, favorite station, and here’s another reason to love them.

I do not know Dame Barbara, but I do think Shelley would have loved the internet. I can see him doing this:
http://www.amazon.com/Love-Percy-Bysshe-Shelley-Sweatshirt/dp/B000JC78CC
or any of these:
http://shop.cafepress.com/percy-shelley
I can only imagine what else would follow. I think at times he might shut Twitter down with the amount of hits he got.

But let’s just take note of this:
Shelley only has 1880 items on cafe press.

I, on the other hand, have 22,700. Twelve times as many.
http://shop.cafepress.com/jane-austen
Although I would probably not use the internet. After all I wrote as “A Lady” and asked Cassandra to burn my letters. Definitely don’t want to be saved on the world wide web for all eternity.

Oh, LOL! I did not know about this album, but somehow I am just not surprised. :)) I loved those Cartland books when I was about 9 or 10–they seemed the height of romance to me then (much like I thought Princess Diana’s wedding dress was the epitome of what a gown should be). For fun I tried to read one not too long ago–couldn’t get past the first 2 pages. But I do have fond memories of those crazy old books. 🙂

Somehow I can’t make myself listen to a Cartland album. Wonder how many sold?

I never read a Barbara Cartland, but I just read her biography on Wikipedia. She was more than the pink caricature of herself that she became. She did a lot of great, constructive things.

Yikes, Barbara Cartland recorded an album? I too don’t think that Barbara Cartland would have had much use for the Internet. Goodness knows she was certainly still alive during the early years. Twittering however she might have taken too. I imagine her dictating her twitters the way she dictated her books (which might explain all those pauses the heroines are prone too!).

I just read her biography on Wikipedia. She was more than the pink caricature of herself that she became. She did a lot of great, constructive things.
Exactly my point, Diane. She chose to maintain the pink caricature rather than promote her work with various charitable organizations, for instance. Some of this may be British reserve about doing good works–Prince Charles, for instance, was unfashionably involved in various nonprofits with inner city youth but paled in comparison to P. Di who knew how to work the media.

I think Shelley would have loved the internet. Beats all that hand distribution of political pamphlets.

Found this much too late. Via Twitter (my god, the slippery slope). But did want to share that Dame Barbara is supposed to have said of her young relative, Princess Diana, that “The only books she ever read were mine, and they weren’t awfully good for her.”